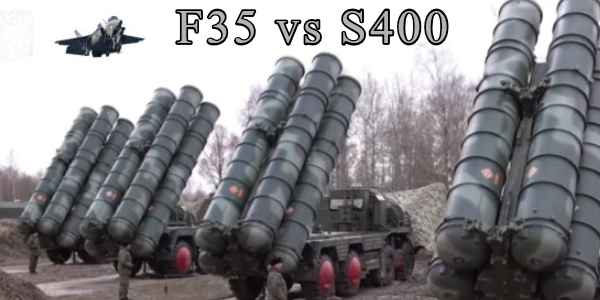 A confrontation between the USA and Turkey could result in Turkey either leaving NATO or possibly being expelled from it. Turkey currently has a very schizoid-looking foreign policy. It is a member of NATO, but President Recep Erdogan of Turkey has increasingly been cozying up to Russia’s Vladimir Putin and Iran’s Supreme Leadership. Of more immediate concern is Turkey’s decision to buy a considerable number of F-35 warplanes from the USA while simultaneously buying a Russian S-400 air defense system designed to shoot down F-35s and other NATO planes  (first link). This has put Turkey in an untenable position of being allied to the USA and NATO in building and buying the F-35 but is allied to the Russian air defense network via its S-400 purchase. Turkey clearly cannot “have its cake and eat it too.” It must decide which deal it wants to keep and which it wants to end as it cannot have them both. The first link reports that the USA gave Turkey an ultimatum to end its purchase of the Russian S-400 system by the end of July or it will lose its right to buy F-35s. The NATO Supreme Commander backed the American position. Russia has said it will begin shipping parts of the S-400 system to Turkey in about two months so Turkey is under a deadline.

The second link reports that Turkey is not inclined to yield to the ultimatum, and that means that Turkey’s tenure in NATO may be coming to an end. Both the first and second links relate that NATO members are, quite understandably, afraid Turkey will share the F-35’s secrets with the Russians installing the S-400 system inside Turkey. Turkey, to put it simply, intends to install an anti-NATO air defense system on NATO territory inside Turkey. That logically cannot be allowed to happen.

The third link focuses on another reason why Turkey may be on its way out of NATO. It documents that Turkey has slipped steadily away from the core democratic values to which NATO members are supposed to adhere. When Turkey was governed by leaders loyal to the Ataturk tradition, Turkey was a respected and trusted NATO member that was a secular Islamic nation. Under Erdogan, Turkey has repudiated Ataturk’s tradition and has been steadily transformed into a dictatorship ruled by Erdogan with only a fig leaf of democratic values and institutions still remaining. The fourth link also makes the case that Erdogan’s pursuit of his private agendas could lead to its estrangement from NATO.

Turkey already has some of its pilots in the USA training to fly the F-35 and some F-35s already built have been allocated to Turkey. The fifth link reports, however, that due to the inability to trust Turkey with NATO secrets, the Turkish pilots in the USA have all been “grounded” and their access to classified information has been terminated. It is clear from the American ultimatum that unless Turkey cancels its S-400 Russian deal, Turkey will not be receiving any F-35s at all. The sixth link makes that clear, and it also gives insight into how Erdogan’s clinging to the Russian S-400 deal could bring economic devastation to Turkey. If Erdogan persists in tilting toward Russia via the S-400 purchase, it is highly likely that Turkey will be hit with a range of economic sanctions that are already on the books to be applied to Turkey. Interestingly, the link indicates that the US Congress may be even more in favor of sanctions vs. Turkey than President Trump. It is possible a breach will be avoided if Trump and Erdogan meet on the dispute, but right now there seems to be little hope of avoiding a major breach between Turkey and the rest of the NATO nations.

Turkey’s economy is already on shaky ground as it has been beset by debt and currency problems. The seventh link reveals that Turkey’s national debt has been downgraded to the point that it is now “four notches below investment grade.” In other words, Turkey’s debt-rating is sliding deeply into junk bond status. Turkey is in a weak position economically already, so any further US and NATO sanctions on Turkey’s business and banking community will hit Turkey hard. There is another dispute that is driving Turkey from the NATO allies. The eighth link cites a dispute over gas drilling rights near the island of Cyprus. Turkey claims rights to drill there, but Turkish claims are not recognized as valid by other Mediterranean nations.  Cyprus has threatened to arrest Turkish maritime crewman if they attempt to drill for gas in the disputed area and other NATO nations are backing Cyprus. This dispute could lead to Turkish naval ships opening fire on other NATO vessels. If this happens, Turkey will almost surely be expelled from NATO. Indeed, under a strict interpretation of the NATO charter which requires all NATO members to respond if one NATO member is attacked, Turkey could find itself at war with all the NATO nations if it openly attacks a NATO member’s ship. Erdogan is playing a very dangerous game of international geopolitics right now, and Turkey may pay a steep price for Erdogan’s actions.

This dispute between Turkey and its NATO allies has interesting biblical/prophetic connections. My books, articles, speeches, and blog available at my website’s homepage have long made the clear case that the western nations in Europe, North America, Australia, and New Zealand are descended from the so-called “lost” ten tribes of Israel. They were never really “lost” at all. A century after they went into exile, God sent a message to them via the prophet Jeremiah (Jeremiah 3:6-12), and Josephus wrote in the first century AD that they were located eastward across the Euphrates River boundary that separated the Roman and Parthian Empires, so Josephus was, in effect, stating that the ten tribes lived in Parthia (it was the Parthian Wise Men who visited the Christ Child in Matthew 2). Jeremiah 3:12 states that at least some of the exiled Israelites were living “north” of Jerusalem in Jeremiah’s time, which is tantamount to stating they lived in Scythia, located north of Jerusalem in the Black Sea region. The New Testament book of James was written to all the scattered tribes of Israel, so James knew where the ten tribes lived in his time.

The Israelites of the ten tribes scattered into many locations on earth. The Prophet Daniel acknowledged that the ten tribes of “Israel” were then scattered among nations both “near” to Persia and those “far off” from Persia. In Genesis 17:1-7, God promised Abraham that he would be the father of many nations, and in Genesis 22:15-18 God promised Abraham’s seed would be innumerably large. These promises have been fulfilled. The modern ten tribes founded many of the modern nations of Europe and Scandinavia as well as North America, Australia, and New Zealand. The tribe of Judah founded the modern Israeli nation. Abraham’s seed via Ishmael is found in the Sunni Arab nations, and Abraham’s sons via his later wife, Keturah, also founded nations–which I believe are located in Eastern and Balkan Europe. The sons of Abraham’s concubines were sent to a country to the east of the Promised Land, and I believe they are found in the Indian subcontinent. However, that still leaves one branch of Abraham’s seed left–the Edomites (descendants of Esau). Genesis 36 gives us the names of Edom’s clans and the most prominent clan was the Temanites, who gave their name to all the Edomite lands when Genesis 36 was written (verse 34). Many ancient languages omitted vowels and wrote just the consonants of names. The consonants of the name, Teman, are T-M-N. Where has that name been found in the modern world?  Before Turkey was known by that name, it was known for centuries as the Ottoman Empire, whose consonants are TT-M-N. I believe the Turks are one of the primary descendants of Edom in the modern world. Why is this important?

In Ezekiel 38-39, biblical prophecy accurately predicted the modern geopolitical alliances of the modern world, and it did so circa 2,500 years ago. In Ezekiel 38:2-6, it lists the nations that will compose the Gog-Magog alliance that will attack the alliance led by the nations of the Israelites in the latter days. Notice that this listing includes Russia (Meshech and Tubal), Iran (Persia) and China (Gomer and all his bands). It is remarkable that not a single modern nation descended from Abraham is listed as being in the latter-day Gog-Magog alliance. If Turkey is Edom, then it gives us hope that Turkey will not be aligned with Russia, China, and Iran at the end of this age. However, Turkey is currently tilting toward Russia.

If Erdogan continues his move toward being an ally of Russia, Erdogan and Turkey are likely to experience the same fate as the former Warsaw Pact nations of Europe. They became subordinate vassals of Russia, and that may be Turkey’s fate if it continues its slide into the embrace of the Russian bear. Russia may also come to regret it if pulls Turkey out of NATO and into the Russian orbit. If Russia effectively removes Turkey from NATO, NATO may decide to openly extend full NATO membership to Ukraine. If Ukraine becomes a NATO member, NATO’s missiles and weaponry could be stationed in Ukraine, just hundreds of miles from Moscow, Volgograd and the Russian industrial heartland. Russia already has cruise missiles in Kaliningrad, just north of Poland, and those missiles can reach many European capitals and Europe’s industrial heartland, so how could Russia object to NATO missiles being in Ukraine if Ukraine joins NATO? If Russia provokes NATO by pulling Turkey out of NATO, Russia may find the price to be paid is having NATO missiles placed in Ukraine aimed at many major Russian cities, military bases and factory regions. That may be too high a price for Russia to pay for selling one air defense system to Turkey. Maybe Russia should cancel the S-400 deal if Turkey doesn’t. We certainly live in interesting times.

For more in-depth information about topics discussed above, please read my free articles, What Ezekiel 38-39 Reveal about a Future World War III, Are We Living in the Biblical Latter Days? and The USA in Biblical Prophecy.