WILL AUSTRALIA DEVELOP ITS OWN NUCLEAR WEAPONS? 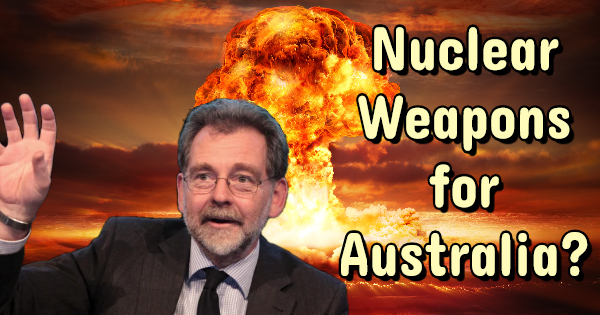 China’s rising militarism is having consequences that China may not have foreseen. Other nations threatened by China are starting to think seriously about obtaining nuclear weapons. Australia has become one such nation. The links below offer differing perspectives on the proposal by a strategic analyst in Australia that that nation needs to consider developing its own nuclear warheads. Two factors are cited in these links. One is the obvious fact that China is growing so strong and belligerent that Australia needs to have its own nuclear weapons to deter an attack by China. The second reason cited is that, under President Trump, the USA’s nuclear shield over Australia may not be as certain as was once thought. I agree with the first factor but largely disagree with the second one.

The first link quite accurately notes that Australia would be “hopelessly vulnerable” to a Chinese attack without the USA as its active ally. That is certainly true. However, I think the overwhelming majority of the US citizenry, as well as President Trump, would support the American defense of its global allies, including Australia. President Trump has been a brutally honest US president in regard to America’s alliance and allies. He has publicly scolded NATO nations for not living up to their agreements to spend at least a minimum percentage of their national GNPs for their own defense spending. In doing so, he was completely right. Many NATO nations have long neglected their own contributions to NATO’s common defense, preferring, as Trump has noted, that the US taxpayers pay for everybody else’s defense. Trump was being smart in making this point publicly. It has prodded many NATO nations into spending more money on their own defense. Australia is not a member of NATO, but the USA and Australia were very close allies in World War II, and I think the common bond between these nations is still very strong. However, Australia is right to take some major steps to defend itself. The real danger to Australia and other US allies is not from President Trump. The real danger is posed by the possibility of a radical leftist Democrat becoming president. Such a president could easily cut America’s own defense to the bone, leaving little or nothing to help defend traditional allies like Australia. The election of a leftist Democrat could leave Australia and all other US allies “on their own.”

I do not know what percentage of GNP is spent by Australia, but the critical factor in determining how much defense spending is enough should not be set at an arbitrary percentage of GNP. Australia is very isolated, geographically, from its global allies. New Zealand is nearby but it is a small nation with little ability to fund serious defense spending. Given China’s growing military power and belligerence, Australia is faced with the question of what must it spend and what weapons must it buy to deter a Chinese attack on its own behalf. That would likely be a figure significantly higher than 3% of GNP. The third link cites the historic rivalry between Australia and Indonesia, but it is my view that both nations–which are acknowledged to be American allies–should become allies because they are mutually and increasingly threatened by China. The third link notes that when Australian naval vessels sail into the South China Sea, they are aggressively shadowed by Chinese vessels and the Chinese have even shined lasers at the eyes of Australian helicopter pilots to impair or blind them. Clearly, Australia is at risk from Chinese militarism as are all the other nations in the region. What seems a logical course of action is for all the regional nations threatened by China to form their own NATO-like alliance. There is another factor allying the nations of the USA, The United Kingdom, Canada, Australia, and New Zealand. These nations are allied in what used to be a secret intelligence alliance called Project Echelon. It is now often called “the Five Eyes” alliance. This is a strong link with obvious advantages and it is not likely to be broken.

The second link cites another analyst that Australia should consider becoming a closer ally of the USA instead of building its own nuclear forces. It also mentions that Australia was close to pursuing nuclear weapons in the late 1960s when it was building a nuclear reactor that would have produced nuclear weapons-grade plutonium. That effort was stopped when Australia had a political change of government. Other nations in the region may also opt to obtain nuclear weapons. The first link cites Germany, South Korea, and Japan as being in that category. Taiwan clearly is greatly threatened by China and has a need to develop its own nuclear weapons to serve as a deterrent vs. Chinese attack. All these nations have the scientific ability to develop nuclear weapons. It is my opinion that it might surprise us all if we knew which nations already have nuclear weapons, but are not talking about them. Israel has long been cited as a nation that has nuclear weapons, although it has not officially acknowledged that it has them. If there is a black market in nuclear weapons, there is a limited number of nations that could sell them to other buyers in clandestine transactions.

Australia is linked to the USA by more than historic alliances and common interests. As readers of my books already know, many modern nations of the Western alliance are descended from the so-called “lost ten tribes of Israel.” While the modern world largely recognizes the Jews/Israelis as the tribe of Judah in the modern world, where are the ten tribes of Israel? They went into exile from the Promised Land circa 730-720 BC but never returned to resettle a nation in their former territories. The ten tribes were never Jewish, to begin with, so you will not find them if you look for them among Jewish populations. Hosea 1:10 prophesied that the ten tribes of “Israel” would be vastly increased in population after they went into exile, and Daniel 9:7 states that the ten tribes had been driven into many nations both near and far from the Persian Empire where Daniel wrote his book of the Bible. My books detail the entire history of the migrations, empires, and events of the ten tribes of Israel throughout all historical periods as well as offering identifications for them in the modern world.

There is clear secular and biblical evidence that the USA is the modern tribe of Manasseh and that the English nations of Great Britain, Canada, Australia, and New Zealand are the tribe of Ephraim. The other tribes are found mostly in Europe and Scandinavia. Please don’t take my word for it. See the evidence with your own eyes in my 4-book series about the history of the ten tribes or you can obtain an E-book entitled The “Lost” Ten Tribes of Israel…Found! as a downloadable E-book for $12.99. The four books of the chronological series about the history of the ten tribes are entitled: The Origins and Empire of Ancient Israel, Israel’s Lost Empires, Parthia–The Forgotten Ancient Superpower and Israel’s Tribes Today, and the set costs $80 (shipping included). All are available on the homepage of my website. You may also read some of the evidence regarding the modern tribes of Manasseh and Ephraim in my free articles, The USA in Biblical Prophecy and Ephraim and Manasseh: Allies in the Modern World. The world would be stunned if it realized the Israelite origin of many modern nations. It would also be troubled because the fulfilled prophecies in the Bible about the Israelite tribes would prove that the God who authored the Bible’s prophecies is real and that he has the power to bring them to pass–both in ancient times and in our modern world.