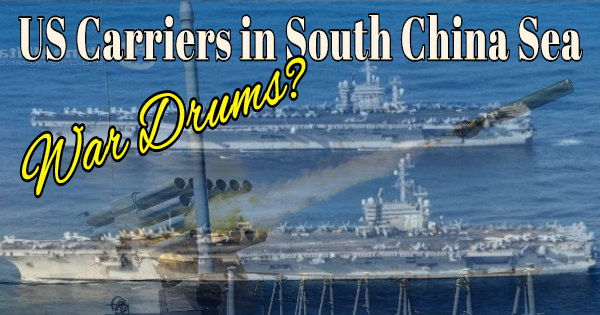 Periodically, I offer updates on the deteriorating conditions in the overall Indo-Pacific Region and the South China Sea. This post is another in this series that documents that war seems to be drawing ever closer in that region, and any such war could draw in many nations. To begin with, Communist China is planning a military exercise to simulate the seizure of Taiwanese territory (first link). In turn, Taiwan conducted a live-fire, military exercise that simulated annihilating enemy invaders on the beach when they attempt to invade Taiwan (second link). Obviously, Taiwan is preparing for an invasion by Communist China.

Also, American criticism of China’s grab for control of the South China Sea has become more strident. The third link reports US Secretary of State, Mike Pompeo, made it clear that the USA regards China’s territorial grab as “illegal,” and the USA is now openly siding with the other nations which surround the South China Sea and oppose China’s maritime territorial grab. The Philippines had been trending toward warmer relations with China in recent times but has now pivoted away from China and toward a closer alliance with the USA. The Philippines is now acting to oppose China’s actions and has even taken delivery of a modern warship, built for the Philippines in South Korea (fourth link). Another such warship is to be delivered to the Philippines later this year. The Philippines would not likely be taking firmer positions against China unless it knew it had the backing of the USA and other nations.

China and the USA both conducted large-scale naval exercises in the South China Sea recently (fifth link and sixth link). China issued very bellicose statements toward the USA and the two American carriers involved in the US’s South China Sea naval exercise. China even boasted of its carrier-killer missiles, and the USA responded by stating it is “not intimidated” by the Chinese threats. Given the array of new Chinese “carrier-killer” supersonic and hypersonic cruise missiles and new ballistic missiles as well, the USA has to have new naval defensive weaponry that it has not yet revealed to the world. Given the immense amount of money poured into DARPA-backed projects over the years, it is my guess that such defensive weapons do exist. Indeed, I think one of the most likely new defensive weapons to protect carriers (or any other target) would be some kind of “Tesla Shield” which would essentially create an electromagnetic shield around carriers to protect them against in-coming kinetic weapons. This kind of shield was theorized in the works of the renowned genius, Nikola Tesla. If such a weapons system has been deployed on US warships, it would certainly give the US Navy reason to be emboldened. The USA has also been making substantial improvements to the infrastructures at the American base on Wake Island to accommodate American forces in any Indo-Pacific war (seventh link).

However, the US Navy just suffered an unexpected setback in its war-making ability. The USS Bonhomme Richard, a small carrier designed for supporting amphibious landings, was undergoing equipment upgrades and retrofit at the San Diego naval port when it caught fire and was burned so badly it took four days to fully extinguish the flames. This ship, designed as a helicopter carrier, had been modified to handle the new F-35 warplanes, and this modification was to be a big boost to US war-making efforts in any Indo-Pacific War. Some reports state the ship’s fire-suppression system had been turned off before the fire started, explaining why the fire took so long to suppress. The eighth link offers photos of how badly the ship was damaged in photos from outside and inside the ship. This ship has been damaged so badly that it looks as if it may never be repaired. If repairs are attempted, it will be a long time until this major ship is ever back with the fleet. China is certainly the beneficiary of this important ship being sidelined. I very much hope the investigation into this fire identifies why the fire-suppression system was turned off before the fire started. The fire may be a result of an accident, but it may also be a result of sabotage.

China’s bellicose actions vs other nations and its high-handed treatment of other nations bordering the South China Sea is uniting more nations in a de facto anti-China alliance. The ninth link examines in detail the emerging alliance between Vietnam and the USA. Both nations are drawing steadily closer in commercial and military ties, and American naval ships are making more ports-of-call at Vietnamese ports. The tenth link cites closer ties coming into existence between Taiwan and Japan–two nations very much threatened by China. The link offers a short version of a longer article that is accessible only by paid subscribers. However, I enclose this introduction to the overall article to confirm that such ties are being forged. The fact that Taiwan is creating military ties to Japan is very important for both nation’s security, and it also indicates how easily a Chinese invasion of Taiwan could spread to a large regional war involving multiple nations. With an increasingly wary eye on China, Australia is now beginning a major increase in that nation’s military forces (eleventh link). That link has a very informative Australian commentary presenting the points made in a recent address by Australian Prime Minister Scott Morrison, who compared China’s current militaristic rise to the militaristic rise of Nazi Germany in the 1930s.

Another possible flashpoint may emerge in the South China Sea. I’m sure readers are aware that China has created artificial islands in the South China Sea and turned them into military bases. Turnabout may soon be fair play! The Philippines announced that its military will soon be fortifying islands in the South China Sea that are already Philippine territory (twelfth link), and there is a report that the US Navy will soon be building up its old presence at Subic Bay in the Philippines (thirteenth link). Clearly, these actions are comparable to moving pieces on a geopolitical chessboard to strengthen one’s position before a major battle occurs. India is also making preparations to increase its military forces vis-à-vis China. It is now taking accelerated delivery of new French warplanes which will greatly add more punch to the Indian Air Force (fourteenth link). What I found of particular interest is the report that the new French warplanes will be capable of firing new cruise missiles with a reported 600-kilometer range. If a war occurs between China and India, this will give India the capability to strike deep into China without ever having its planes leave Indian territory. Depending on where the missile launch-point would occur during an actual war, these cruise missiles could likely be flown to a point where they could launch missiles against the Three Gorges Dam in Southern China. China’s huge dam makes it a very important strategic target in any regional war. China cannot declare it “off-limits,” and has to consider the cost of starting a war which could see that dam breached. The loss of that dam would cause incredible destruction across southeast China due to mass flooding, and there would be a catastrophic loss of crops, factories, electrical-generating capability, etc. as well as many lives.

This post has offered a lot of information to consider, but this is just a slice of what is happening in the Indo-Pacific region as nations prepare for a war that may happen in the future. Events can take on their own momentum where war could become inevitable. I don’t think we are at that point yet, but we are getting ever closer.

These developments are all very consistent with biblical prophecy. They not only fulfill Jesus Christ’s prophecy in Matthew 24:3-8 that “wars and rumors of wars” will characterize the time just before his return, but all the above-described developments further fulfill the prophecy in Ezekiel 38-39, the primary biblical prophecy about global alliances and national destinies in the latter days. Modern events are confirming the accurate predictions made by biblical prophecies regarding the latter days. If they have not done so already, readers are urged to examine much deeper information about these topics in my articles, Are We Living in the Biblical Latter Days?, What Ezekiel 38-39 Reveals about a Future World War III, Japan’s Role in Biblical Prophecy and The USA in Biblical Prophecy. If you read these articles, you will see just how accurate Biblical prophecy really is, confirming that only a Divine Creator Being could have both inspired them millennia ago and be guiding their fulfillment in our modern times.

My thanks to a reader for sending me one of the above-cited links.