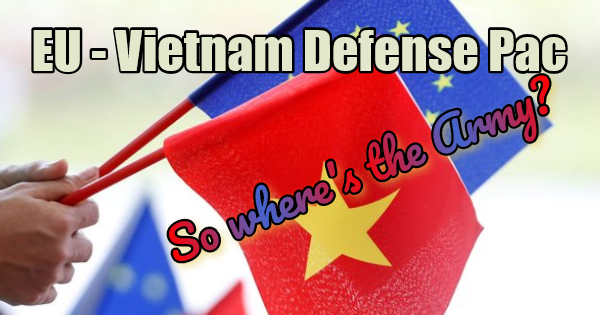 In a little-noticed but important development a few days ago, the EU’s top diplomat was in Vietnam to sign a new defense pact between the EU and Vietnam (first link). The second link offers more details about this pact, which besides discussing the new EU defense pact, also comments on the strengthening ties between the USA and Vietnam. The only revealed impact of the pact so far is that France has agreed to send a military presence to the South China Sea approximately twice a year. This is most likely going to be a French flotilla of warships. The second link also examines the tense history of Vietnamese-Chinese relations and the fact that Thailand and the Philippines are understandably intimidated by the Chinese military power in the region.

Vietnam and China have a history of confrontation that goes back decades. In 1979, China invaded Vietnam after the Vietnamese did the world a favor and deposed the genocidal, China-backed Khmer Rouge regime (third link). That Communist China was so lacking in conscience that it backed the Khmer regime (of Pol Pot) which launched a Holocaust against its own people is a fact worth remembering. While China attacked Vietnam to exact retribution for Vietnam’s overthrow of the Khmer Rouge regime, the outnumbered Vietnamese successfully drove out the Chinese forces. The history of that all-but-forgotten war is reviewed in the third link. This is worth noting because it confirms that Vietnam has already successfully defended its nation against a Chinese invasion in recent history. However, Vietnam is heavily outgunned by modern China’s military machine, so Vietnam now understandably seeks allies wherever it can find them. This has led Vietnam to develop much closer military and political ties with the USA (discussed in previous posts at this website), and now it has done so with the European nations as well. It is worth noting that the first initial result of the EU-Vietnamese pact will eventually be friendly visits to Vietnamese waters by French warships. Before Vietnam fought the USA in a very long and costly war, it first fought the French who had governed Vietnam when it was a part of French Indo-China after World War II. Now it is the USA and France that are cultivating an allied relationship with Vietnam to counter the Chinese threat to Vietnam and to the freedom of navigation in the South China Sea.

There is something quite odd, however, about the EU-Vietnamese “defense” pact. The EU does not have or command any military forces so how can it sign a “defense” pact? I think the answer to this question involves a diplomatic dance with semantic nuances. It is the USA-led NATO which has actual military forces from many European nations to command, so why didn’t NATO sign this defense pact with China?  If NATO had signed a defense pact with Vietnam, it would have greatly angered China and would have complicated the already-tense US-Chinese trade war. China knows the EU has no military forces, so it is not directly threatening to China to have the EU sign such a pact. However, I believe that the EU becoming a signatory to a defense pact with Vietnam is a warning to China that NATO itself may be signing defense treaties with a variety of Asian nation who are threatened by China unless China backs off it’s military bullying in the Indo-Pacific region.

To back up this assertion, just days after the Vietnamese-EU “defense” pact was signed, NATO’s Secretary-General, Jens Stoltenberg, showed up in the Indo-Pacific region. During a visit to Australia, the NATO head is reported to have stated: “an alliance presence was necessary to meet the challenge of an increasingly assertive China.” (fourth link). This confirms NATO is closely watching the rising threat posed by Chinese militarism. European nations have many businesses conducting a very large amount of trade with Indo-Pacific nations, so it makes sense that European nations want to have military forces protecting that trade. The EU can’t perform that role, but NATO can. NATO’s visible presence in the region soon after the EU-Vietnamese deal was signed affirms that NATO is just one step away from forming alliances with Indo-Pacific nations threatened by China. Neither the NATO nations nor the Indo-Pacific nations can allow China to seize control of the South China Sea. Such action by China would pose an existential financial/economic threat to the economies of many nations.

Some readers may be surprised to learn that this development toward an alliance between NATO and Indo-Pacific nations is entirely consistent with a biblical prophecy written circa 2,500 years ago. Ezekiel 38-39 contains an extensive prophecy about a great world war that will occur at the end of our age in a time called “the latter days.” While the prophecy names many nations in the world today as being members of two rival alliances, it identifies them via their ancient names. In order to apply this prophecy to our modern world, it is necessary to identify what modern nations are referenced by such ancient names as the “house of Israel, Gog, and Magog, Persia, Tarshish, Sheba and Dedan, Togarmah, Gomer,” etc. My free article entitled What Ezekiel 38-39 Reveal about a Future World War III offers extensive examination and confirmation regarding these ancient-modern relationships. Other related articles include Are We Living in the Biblical Latter Days?, The USA in Bible Prophecy and Japan’s Role in Bible Prophecy. If you examine the evidence contained in these articles, you will see that the Bible ‘s prophecies offer a strikingly accurate perspective on modern events–confirming that a Creator God inspired those prophecies and is now bringing them to pass in our modern world.