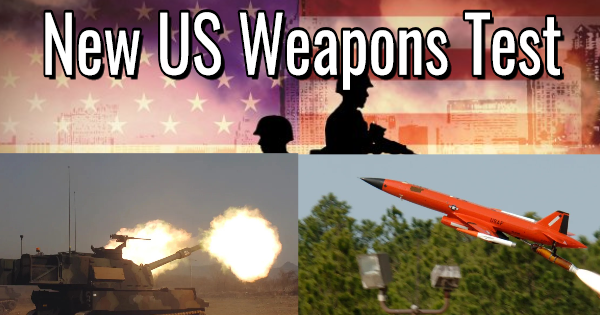 Sometimes a seemingly-small development has a great deal of impact. The topic for this post is, I think, in that category. As long-time readers of this blog know, I have over the years drawn attention to the vulnerability of US aircraft carriers to new classes of Chinese and Russian supersonic and hypersonic cruise missiles as well as American efforts to defend against them. It has now been revealed that the USA has invented a new class of weaponry designed to defeat incoming cruise missiles, and I wanted readers to know about this new class of defensive weaponry.

The US military has demonstrated a new kind of weapon that features a munition that can be launched from either a US army howitzer or a naval deck gun. It is a projectile that can attain a speed of Mach 5 en route to intercepting cruise missiles (first link, second link). It was successfully tested against a volley of incoming subsonic cruise missiles, but the fact that this new munition can travel at a hypersonic velocity clearly means it was developed to intercept supersonic and hypersonic cruise missiles as well. Whether it can do so already is not publicly-available knowledge. These new munitions fired from a variety of gun barrels are integrated into an artificial intelligence (AI) system that can target and identify incoming missiles. This new munition has several advantages. It is far cheaper to fire one of these “shells” than to fire a multi-million dollar interceptor missile at an incoming cruise missile. Since the projectile is small enough to fire from an artillery barrel, it will be harder for enemies to detect it as well. One huge advantage is the same “shells” can be used by either the Army’s artillery pieces or by the US Navy’s deck guns (I assume the standard 5″ deck gun). Since self-propelled artillery and navy ships are mobile, these shells can be fired and the launchers can move to another position for fire more munitions. Since it is a “smart” munition which is integrated into an AI weapons system, it can be assumed the munitions are autonomous “fire and forget” projectiles that do not require the launch platform to stay in one position (as with a wire-guided anti-tank weapon fired from a Bradley Fighting Vehicle for example).

Since this new hypersonic projectile can be fired from at least two different kinds of artillery gun barrels, it seems evident that the projectile fits inside an adjustable “sleeve” which can adapt the munition to any large artillery barrel. It is also worth asking whether this munition can be fired from a man-portable system similar to a large mortar barrel. It also seems evident that any “smart” munition that is small enough to fit inside an artillery barrel must be a short-range weapon system as it can only carry a limited amount of propellant. In a naval environment, it would seem this munition fired from a 5-inch deck gun would complement the Phalanx point-defense system which is already deployed on US surface warships.

An obvious question is: Why did the USA reveal this new weapon openly at this time? I think that, given the revealed advances in Chinese and Russian cruise missile technology, it was necessary for the US military to display a new defensive weapons system that can be used against incoming cruise missiles fired at US forces. One huge advantage of this new munition is that does not require any changes in the navy ships’ hardware or in US Army artillery barrels to be used. Since this new munition was designed to use currently-deployed weapons launchers, it can be deployed almost immediately (perhaps such deployment is already occurring). Since it is an AI-managed munition, I assume that it will require some reprogramming into the US naval ships’ software to adapt this new weapon into the current Aegis defensive systems already present on US surface warships. I have another naval-related question. We know that modern ICBMs typically have multiple warheads on them to be directed to several different targets. A submarine’s torpedo tube is much larger than a single artillery barrel or a naval deck gun. Could these small, new, “smart” anti-cruise missile “shells” be placed in a package of perhaps ten of them which could be launched from a submerged submarine’s torpedo tubes and, upon reaching the surface, attack incoming cruise missiles using an autonomous and AI-integrated “swarm” technology?

Think of the geopolitical weaponry competition as a poker game. Some poker games have some cards which are known to all players and some cards which are known only to each player. If a player has “nothing” showing, his hand won’t be taken seriously. It is the same in world military geopolitics. Unless you have some serious weapon systems “showing” (known to your opponents), you will not establish any deterrence against their attack. US military planners need to keep some key weapons systems secret but they need to reveal enough strength to deter an opponent from starting a war. These new munitions could also be a “force multiplier.” The US Army is equipped with modern versions of the M1 Abrams tank. The links below use the word “tank” to describe the launch platforms for the new munition even though the launch is actually a self-propelled, armored artillery piece. If this new munition can be fired from actual Abrams tanks, it makes each tank in the US inventory a potential cruise-missile destroyer. Indeed, old tanks now “retired” in mothballs could theoretically be reactivated and equipped to fire just these munitions as part of an entirely new ground-based defense system against incoming cruise missiles on any battlefield. Many US allies could use this new munition. Taiwan would especially benefit from buying hundreds of these new munitions to down Chinese cruise missiles that would be fired in any Communist Chinese invasion of Taiwan. The third link makes the case that the USA may be doing better in the hypersonic weapons competition than most realize.

This kind of readily-deployable, high-tech munition in the inventory of the US Army and Navy lessens somewhat the chances of the Chinese starting a war in the South China Sea or anywhere else. It was most ingenious to design the projectiles to fit into current ground and naval weapons systems so there was no need to design or build any new launchers for them.

Does this have any biblical, prophetic ramification? It could. Parallel prophecies in Ezekiel 38-39 and Revelation 19-20 foretell of an age-ending global world war at the climax of this age as it transitions into the next age of utopian peace and prosperity that will result from divine rule replacing all human rulers everywhere on the planet. This age will only occur after divine intervention ends an on-going world war that is threatening to destroy all flesh on earth (Matthew 24:21-22). Nothing is guaranteed, of course, but the unveiling of a new American weapons system to defeat cruise missiles makes it is less likely that a major regional war will occur just yet. It has long been my understanding that the final war prophesied in Ezekiel 38-39 and Revelation 19-20 will not occur until after (A) Babylon the Great ‘s current world system has fallen, (B) a new global “beast” system has risen to take its place for 42 months, and (C) the 1260-day ministry of the Two Witnesses has been concluded with their martyrdom. I want to be sure to state that regional wars between the Gog-Magog bloc and the Western bloc are still possible, but a new, high-tech, anti-cruise missile system that can quickly be deployed by the USA makes such a war somewhat less likely.

For much greater discussion of the above-referenced biblical prophecies, I invite readers to review my free articles, The Two Witnesses, Are We Living in the Biblical Latter Days?, The USA in Biblical Prophecy and What Ezekiel 38-39 Reveal about a Future World War III. Incredible events are going to occur in our world’s future. Biblical prophecy has a remarkable habit of being proven right, so it behooves everyone to know what they reveal is going to happen in the years ahead of us.

One last thing, I sure hope the designers of this new weapons system made sure that it is survivable in an environment where an electromagnetic pulse weapon (EMP) is used. It is been painfully obvious for decades that all new weapons systems must be equipped with to remain functional in spite of EMP attacks.