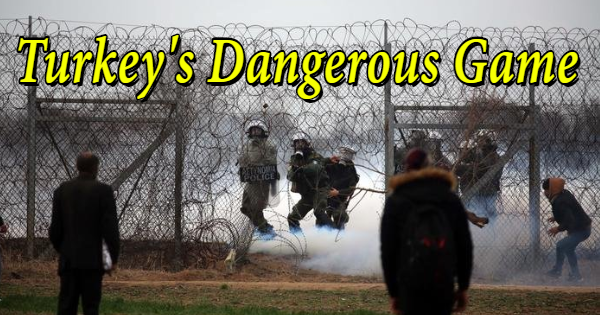 Amidst the mass media coverage of the global coronavirus pandemic, some very important events are unfolding that could cause an actual shooting war, not merely a war against a new virus. Turkey has taken actions that risk not only one but two wars in the Eastern Mediterranean region. Turkey has instigated a direct confrontation with the EU over the millions of migrants currently taking up residence inside Turkey, and it has already engaged in intense conflict with Syria (Russia’s ally) along the Turkish-Syrian border. Let’s examine them one at a time.

First, Turkey has provoked a sudden crisis with the EU by telling migrants inside Turkey that it was “opening its border” with Greece. This started a flood of migrants heading toward the Greek border with Turkey. What Turkey failed to tell the migrants is that Greece had not opened that very same border. This created a serious international confrontation between Turkey on one side and the Greeks, the EU and NATO on the other side. The first link and second link examines the details of this growing crisis which has Greek and Turkish forces on either side of the border with many thousands of desperate migrants caught in the middle. Greece will not let them into Europe and Turkey doesn’t want them back in Turkey. Accusations are flying on both sides, and this escalates the chance of a worsening confrontation. It is obvious that Turkey’s President Erdogan is using the migrants to pressure the EU into giving Turkey a better deal regarding the many migrants/refugees currently located inside Turkey. The links include heart-rending photographs of how bad this situation has become. The third link reports that Turkey has sent “special operations police” to the Greek border region and that Greece is using non-lethal force to keep the migrants outside its border. The fourth link reports that 35,000 immigrants are now bunched up on the Greek border with nowhere to go since Turkey doesn’t want them back. Backing up the Greek police forces are civilian militia groups who will also use force to keep the immigrants out (fifth link). This confrontation is unfolding at sea as well as on land. The sixth link adds details that the Greek navy is acting to keep immigrants out of Greek islands which already are severely overburdened with immigrants from previous waves of illegal immigration into Greek territory. It even offers details on a Greek effort to create a floating sea barrier to keep immigrants’ dinghies from reaching its shores.

The seventh link offers more information about the strategic confrontation between Turkey and the EU nations. Turkey is not a member of the EU, but it is a member of NATO so this fact muddles the situation considerably. There are two irreconcilable vital interests at work here. Turkey cannot keep taking in migrants and refugees from the Syrian civil war and from other regions of the world who try to use Turkey as a gateway to Europe. Turkey’s position is quite understandable (eighth link). The EU and Greece cannot accept any more immigrants and refugees, and their positions are equally understandable. Doing so could literally break the EU apart as some European nations will refuse to accept any EU diktat to accept more illegals. If they are pressured into doing so, more European nations may follow the United Kingdom out of the EU. Nations in Eastern and Balkan Europe are especially likely to depart the EU if the EU accepts any more illegal refugees from Turkey and tries to force its member nations to accept them. Even Germany, which led the admission of millions of illegals into Europe several years ago, is not voicing any willingness to accept more illegal migrants this time. Germany is headed by Angela Merkel, but her governing coalition is very weak and another immigrant crisis could topple it and send Germany into new elections. It does seem that the eventual solution may be that Turkey will use this new immigrant crisis into essentially extorting more money out of the EU to support the many migrants now sheltering in Turkey with nowhere to go. That may have been Turkey’s goal all along. The ninth link indicates that just such an agreement might defuse this latest migrant crisis.

Turkey’s second crisis is unfolding along the Turkish-Syrian border. This crisis already has caused combat between Turkish and Syrian forces. Syria’s central government, backed by Russia’s air force, Hezbollah and Iran’s military forces as well, has been retaking all rebel territory and was close to retaking the last rebel province in Idlib. Alarmed that this would set off another wave of a million of more refugees into Turkey, Turkey closed its border and sent some of its military forces into Syrian territory. At least 33 Turkish soldiers died in one strike alone vs. their position and more were wounded. Turkey hit back with a major retaliation. With warplanes, aerial drones, tanks and artillery, Turkey’s strikes reportedly killed as many as 2,000 Syrian soldiers or fighters in their allied forces. The tenth link and eleventh link have excellent discussions of this Syrian-Turkish combat as well as video clips and photographs regarding this conflict. As usual, the Mideast manifests many confused alliances and interests. Russia apparently largely stayed out of the Syrian-Turkish fighting even though it is Syrian’s ally. Russia is also in the process of selling an advanced S-400 air defense system to Turkey and doesn’t want to jeopardize that sale. Turkey has been drifting out of NATO by buying the Russian system, but Turkey wanted NATO support for its Syrian operation. This was in spite of the fact that Turkey was threatening its fellow members by trying to stampede illegal migrants into Greece and the EU nations–many of which belong to NATO. Turkey is angering NATO and EU nations by its actions along the Greek border, and NATO member Bulgaria is activating its military along its border with Turkey in case Turkey sends illegals crashing across the Bulgarian border. Greece and Turkey are historic enemies, and it is apparent the victorious allies after World War II put both of them into NATO to try to avoid any further wars or bloodshed between them. Greece has been forming a strong bi-lateral tie with Israel even as Turkey’s Erdogan has been very anti-Israeli in his policies and language, so Israel is watching this closely as well. Needless to say, this situation remains an unsolved problem that could cause further fighting in the region.

Turkey has demonstrated in its multi-day military offensive vs Syrian forces that its military is a formidable force with good skills and very capable weapons. If they had had to fight the Russian forces in Syria, things might not have turned out so well. Russia still wants to avoid fighting Turkey in combat as it would end Russian-Turkish cooperation in building Turkey’s new air defense system.  Turkey is, however, playing a dangerous game by angering NATO, the EU, Russia, Syria, Iran and Hezbollah in its various actions. Turkey could end up being isolated with no real allies who can trust Turkey. I think the NATO nations are allowing Turkey to stay in NATO for now hoping that the Turkish voters will remove Erdogan in the next Turkish election and that a more reasonable Turkish leader will then take office.

The tensions between Turkey and the European nations has a very ancient origin which isn’t largely realized. The Turks are descended from Esau, the son of Isaac, and many European/Caucasian nations are descended from Jacob, the son of Isaac and brother of Esau. Jacob stole the “birthright” blessings from Esau when Esau sold it to Jacob for a serving of porridge (Genesis 25:29-34, 27:1-46). Jacob’s name was later changed by God to Israel (Genesis 35:10) and Israel had twelve sons from which descended the twelve tribes of Israel. Centuries later they were in one kingdom under David and Solomon, but soon after Solomon’s death, they divided into two often-warring nations. The modern Jews have descended from the ancient southern kingdom called Judah and the so-called “lost” ten tribes of Israel scattered widely across the earth after the ancient northern kingdom of Israel fell in the 8th century BC. My books detailing voluminous secular and biblical information about the ten tribes of Israel throughout history can be obtained at the home page of this website.

The modern Turks were long called the Ottoman Empire and that name preserved the consonants of the Temanites, a major clan of the Edomites–the descendants of Esau (Genesis 36:1, 15 and 34). Modern events are confirming some of the old Israelite-Edomite rivalries are still “in the blood” of modern nations. As many readers of my blog and other materials realize, the Bible has much to say about events that will happen in our future and this includes a climactic World War III which will occur at the very end of our age. Ezekiel 38-39 offers many details about this future war, and the two modern global alliances’ members are described by their ancient ethnic names. The Gog-Magog alliance led by Russia, China and Iran has its members listed in Ezekiel 38:2-6 and I want to direct readers’ attention to very important detail. Not one ancient or modern nation descended from Abraham is listed as a member of this Gog-Magog alliance at the end of our age. Since Turkey is descended from Abraham via Esau, this infers that Turkey will, indeed, be a member of the Western alliance at the end of this age, in spite of its current tensions with the rest of the NATO nations. My books and articles identify many modern nations with the ancient nations mentioned in both alliances in Ezekiel 38.

For in-depth information documenting the above assertions, please read my articles, What Ezekiel 38-39 Reveal about a Future World War III, The United States in Biblical Prophecy,  Four Reasons the Jews are Judah, and Japan’s Role in Biblical Prophecy. If you read these articles and my books, you will understand how accurately the Bible’s historical narratives really are and you will also come to realize a great deal about what is going to happen in global geopolitics in the years ahead of us.