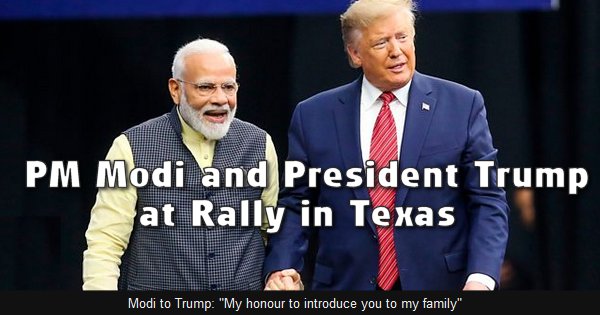 A major event occurred in Houston, Texas recently which drew barely a ripple of coverage from the American media which is so hostile to President Trump. President Trump and Prime Minister Modi of India co-hosted a huge rally in Houston that attracted 50,000 enthusiastic fans. Trump routinely draws huge crowds of 20-30,000 wherever he appears around the nation, but the rally in Houston drew tens of thousands of enthusiastic Indian-American supporters of Prime Minister Modi in addition to Trump supporters.  It was a celebration of the growing ties between the USA and India as well as a re-affirmation of the very close personal relationship enjoyed by Trump and Modi. The first link notes that it was “one of the largest ever receptions for a foreign leader in the US.” One may possibly have to go back to World War II when British Prime Minister Churchill visited the USA for, a reception so large. The second link reported the enthusiasm of the crowd for the Trump-Modi event and that it confirmed the growing trade and security ties between the two nations. It added that [under Trump’s administration], the USA has become India’s largest trading partner, eclipsing China in that role. The third link noted the heavily Indian-American audience gave Trump a standing ovation and Modi gave the Texas-based crowd a loud “Howdy” in his greeting. All the links discussed the possibilities of this event moving the loyalties of American-Indian voters from the Democratic party to the Republican party of Donald Trump.

This was a historic event. If Obama was still president and he had been as pro-Modi at that rally as Trump was, the American leftist media would have hailed his statesmanship and his furtherance of an important alliance between the USA and India. However, since Trump accomplished this major achievement, there was minimal coverage from the American press. Readers are urged to notice that the first three links are all from the foreign press, including the anti-Trump BBC and DW outlets. For several years, India and the USA have been drawing much closer due to the mutual threat from increasing Chinese militarism. Indeed, the USA, India, Japan, and Australia have been referred to in media articles as the “Quad” nations that are opposing China’s efforts to seize military control of the Indo-Pacific region. The Quad nations are joined by smaller nations such as Singapore, Vietnam, South Korea, Taiwan, etc. in being threatened by China’s hegemonic desires. The Houston rally went a long way toward deepening the military/security cooperation between the USA and India. The fourth link and fifth link comment on the military threat to India posed by China and one link reports the Indian navy is adding 56 new surface warships and 6 new submarines over the next decade to oppose China’s growing naval fleet. These links detail the emerging role of the “Quad” nations in opposing Chinese militarism in the region, and it also identifies Cambodia and Pakistan as China’s most likely new allies in the Chinese alliance.

The first three links all mention Pakistan’s objections to the deepening India-American alliance, but Pakistan has already taken steps to ally itself to China so Pakistan is hardly a neutral party in any such statements. Pakistan and China are building a huge seaport at Gwadar, Pakistan located on the Arabian Sea which is surely destined to be a port for Chinese military ships in time, and Pakistan is also ordering modern naval ships from China. While nations will try to manage the semantics of what is happening, it is clear that two nuclear powers, Pakistan and China, have become allies vs. India and nuclear-armed India is becoming a closer ally of the nuclear-armed USA. The USA and India very much need each other in the Indo-Pacific region and the enthusiastic Trump-Modi rally in Houston indicates both leaders are fully aware of that fact.

A wild card has emerged in the efforts of the Quad nations plus smaller nations in the Indo-Pacific region to confront China. France is vigorously taking action to ally itself with India and become an ally to the Quad nations in opposing China. France’s President Macron and India’s Prime Minister Modi signed a series of bilateral agreements recently which effectively make them military allies (sixth link). The agreements increased their defense ties and included the remarkable step that French and Indian warships could jointly use each other’s naval bases. That effectively makes France a military ally of India (deepening NATO ties to India). France is not only concerned about the need to ensure freedom of navigation for European maritime trade via the South China Sea with Japan, South Korea, Taiwan, etc., but France also has a number of far-flung dependencies in the Indo-Pacific region that are still French territories under French protection. France announced it will periodically send its warships to the Indo-Pacific region, and its navy has recently conducted joint maneuvers with all four of the “Quad” members as well as other Indo-Pacific nations threatened by China. A French nuclear-powered aircraft carrier recently visited the Pacific region and its visit to Singapore is discussed in the seventh link. In a move that China surely regarded as very unwelcome, France sent a warship through the Taiwan Strait separating Taiwan and China–a clear warning to China not to attempt an invasion of Taiwan. In doing so, France has joined the US Navy in conducting such naval operations in the Taiwan Strait (eighth link)

These important geopolitical developments are occurring at a time when the American leftist press is ignoring them because they are so obsessed with the leftist efforts to impeach Trump –even though Trump hasn’t been shown to be guilty of even so much as an unpaid parking ticket! However, these ignored geopolitical developments are entirely consistent with the biblical prophecy in Ezekiel 38-39 which foretold very accurately the alliances that would exist in the latter days just before an age-ending World War III breaks out. Readers can see the extensive evidence that we are in that prophetic time in my article, Are We Living in the Biblical Latter Days? Ezekiel 38-39 clearly asserts that it will be fulfilled in the “latter days” of our age (Ezekiel 38:8 and 16).  It identifies an alliance of Russia, China, Iran and their allies in Ezekiel 38:2-6; a listing of modern nations called by their ancient names, which is often referred to as the Gog-Magog alliance. At the very end of our age, it will launch a surprise attack against the latter-day nations descended from the ancient ten tribes of Israel, but it will end with divine intervention and a crushing defeat for the Gog-Magog alliance (Ezekiel 38:18-39:7). The term “Israel” found in Ezekiel 38-39 does not mean the modern Jewish nation named “Israel.” The Jews are consistently called “Judah,” not “Israel,” in latter-day prophecies (Zephaniah 2, Zechariah 12 and 14). An in-depth look at the tribe of Judah can be found in my article, Four Reasons the Jews are Judah. Significantly, it should be pointed out that “Judah” is not mentioned at all in the prophecy found in Ezekiel 38-39.

The ten tribes of Israel were prophesied to expand into huge populations after their exile from the Promised Land in the 8th century BC (Hosea 1:6-10), and they would also be known by the name of Isaac (Genesis 21:12, 48:16). The term Isaac appears as “Saka,” “Sacae,” “Asaak,” “Saxons,” etc. in ancient secular histories, depending on whether it is the Persians, the Greeks or Romans who are describing them. The two primary, “birthright” Israelite tribes of Ephraim and Manasseh, were prophesied to be “brother” tribes who would become very large and powerful on the global scene. Ephraim would be a group of separate but related nations in the latter days while Manasseh would be one single powerful nation. Readers may see some of the primary evidence regarding which tribe of Israel founded the USA in my article, The USA in Biblical Prophecy. Since I mentioned France in this post, I will also mention that France is clearly liked to one of the Israelite tribes in historical/biblical accounts.

My first book tracing the ten tribes of Israel, The Lost Ten Tribes of Israel…Found!, was released in 1996 and sold out several printings. It is now available as an E-book at the homepage of my website as is a 4-book set that features expanded information, photographs, illustrations, etc. All these books are heavily sourced and combine secular historical evidence with biblical prophecies. If you wish to understand God’s divine plan for the nations, that is unfolding in our current time, you need to obtain copies of at least some of these books. For over 30 years, I’ve written and spoken on the prophecy in Ezekiel 38-39, and have long predicted that India, Japan and other export-driven nations in the Pacific region would become allies of the NATO nations of Europe, based on the modern identifications of their ancient predecessors mentioned in Ezekiel 38-39. My article, What Ezekiel 38-39 Reveal about a Future World War III, reveals all the methodologies used to link important ancient nations and their modern counterparts and reveals how World War III will start and end.

The national destinies foretold in Ezekiel 38-39 have now all been fulfilled in the modern alliances that have formed in the world. Is it not remarkable that a prophecy written circa 2500 years ago determined the destinies of modern nations? And yet, that is exactly what has happened. I urge you to read the above articles and at least some of my books to see how precisely accurate the Bible’s prophecies really are. Once you see the evidence, there is no conclusion to be reached other than that an all-powerful and invisible Creator Being originally inspired biblical prophecies and is guiding them to fulfillment in our current time.