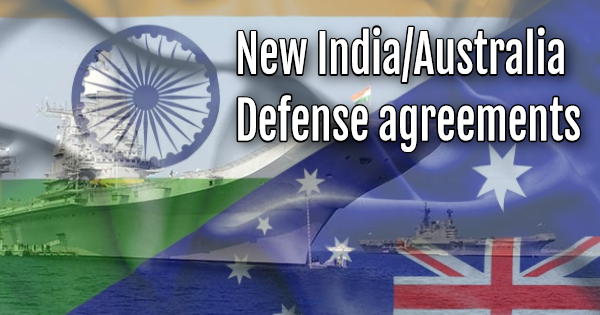 These pacts will allow for Indian and Australian warplanes and naval warships to enjoy mutual basing and replenishment privileges at each other’s airports and naval bases, and the Indian-Australian relationship is expected “to go broader and deeper” in the wake of these agreements. One likely outcome is that Australia will join naval exercises with the Indian, Japanese and American navies in the not-too-distant future. One link mentions that India, clearly threatened by its proximity to China and having a tense stand-off with China in the Himalayan region as this piece is written, has already signed similar defense pacts with the USA, France, and Singapore. The four large nations of India, Japan, Australia, and the USA are sometimes referred to as the “quad” nations in the growing Indo-Pacific alliance forming for collective defense against any wars provoked by China. The fifth link adds that a similar defense pact has been signed between India and Vietnam–a nation also threatened by China.

While unspoken, such defense pacts for mutual basing and replenishment of supplies indicates a much deeper level of military cooperation between these nations is now being undertaken. In order for an Indian naval vessel, for example, to receive replenishment of its weaponry and supplies at an Australian port, there has to already be a pre-positioned stockpile of the weaponry and supplies needed by an Indian warship at Australian ports. Naval warships and warplanes from various national militaries were built by different companies with different weaponry, rockets, electronic equipment. etc., all built to different specifications, calibers, fittings, etc. For Japan, Australia, India, the USA, France, Singapore, etc. to be able to replenish their war stocks and supplies at each other’s bases, these nations all have to pre-position the kinds of supplies and weaponry needed by their national militaries at the military bases of each of the other nations in this growing collective defense alliance vs. China. It is also true that in any war with China, it must be assumed that Chinese military forces will destroy a number of the military bases of the nations in the defensive alliance. This means that significantly large war stocks for each nation’s military forces must be stored at the military bases of other nations. A major case in point is Singapore’s military. Singapore is a wealthy city-state that can fund a much larger military force than its small size would indicate. Therefore, Singapore can “punch above its weight,” but it dare not base all its own military forces within its small borders lest they all be wiped out in one attack. Singapore has long recognized the need to disburse its forces and the sixth link details such actions during recent decades. The seventh link describes an on-again, off-again effort by Singapore and New Zealand to arrange for a permanent base for the Singaporean air force in New Zealand. Singapore has had a longstanding but informal alliance with the USA, and Singaporean air force planes routinely are present in the USA for training exercises.

All the above military developments are entirely consistent with very specific prophecies found in the Holy Bible concerning the events of the “latter days” of our age. As long ago as 1987, I began warning in my writings that the key latter-day prophecy in Ezekiel 38-39 (see Ezekiel 38:8 and 16 for specific time context) foretold many facts about the global alliances that would form in the latter days and how an age-ending World War III would begin, unfold and end. When the Soviet Union fell in 1989-90 and Asian geopolitics were in great disarray, I heard from some people who asserted that I was “way off base” for asserting that biblical prophecies foretold that Russia, China, and Iran would eventually become key allies in an anti-Western alliance and that Russia and China would never pose strong military threats to the USA and its allies. However, as time went by, all that I wrote about has come to pass. I made (and make) no prophetic claims for myself because my writings and expectations were simply based on a literal application of Ezekiel 38-39 and other biblical prophecies to our modern world.  In the modern world we now face, the global national alignments are in precisely the arrangements that I expected, based on Ezekiel 38:2-6. I had complete confidence that biblical prophecies would be fulfilled literally in our time.

Based on Ezekiel 38, I not only wrote that there would be a USA-NATO led western bloc and a Russian-Chinese-Iranian alliance, but that there would also be an Asian bloc of nations that would emerge which would either be allied with the western bloc or exist as a third bloc not hostile to the western bloc. The former of these two options has come to pass. You can verify these claims about the accuracy of biblical prophecies in a series of in-depth articles I wrote years ago. These articles are: Are We Living in the Biblical Latter Days, What Ezekiel-38-39 Reveals about a Future World War III, and Japan’s Role in Biblical Prophecy.  The second article was written in 2005 and the other two were penned in 2007, so they were written well in advance of modern events. I urge readers of this post to read those articles if you have not done so. We are approaching the great climax of the latter-day period when these events will take place, so it is best that you be forewarned about what will occur. I never predict the years of these prophecies’ fulfillment as that is entirely in God’s hands, but given the rising tensions and alliances that are forming in the world, modern politics are clearly being guided by the Creator God to fulfill his Bible’s prophecies in the years ahead of us.  Whether mankind likes what God will do is entirely irrelevant, and no power can stop God’s ability to fulfill his prophecies.  As Ezekiel 38:10 and Proverbs 21:1 show, God will put into the minds of national leaders whatever decisions he wishes them to make to fulfill his will and his prophecies.