THE UNREPORTED SUCCESS AT THE TRUMP-KIM SUMMIT IN VIETNAM 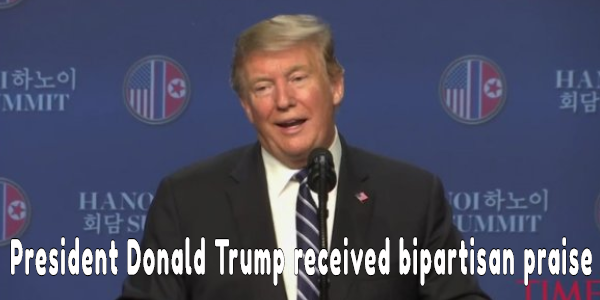 No doubt, readers have seen many media reports about the “failure” of the Trump-Kim summit in Hanoi, Vietnam. There were no historic breakthroughs or deals made between North Korea and the USA; however, many media reports overlooked a huge signing success that occurred during Trump’s visit to Hanoi. This post will offer you details about that signing and offer thoughts on who won and who lost at the Hanoi summit. First, let’s briefly review the US-North Korean aspect of this summit.

The first link and second link offer analysis that expresses the majority opinion within influential American political circles that Trump did the right thing by walking away from a bad deal with North Korea and promptly flying home to the USA. Even Democratic leaders praised Trump for doing the right thing under the circumstances. That alone speaks volumes as the Democrats rarely have anything good to say about President Trump or his policies on anything. As a sidebar to the “denuclearization” talks between the USA and North Korea, it has also been revealed that North Korea has been aggressively using hacking attacks against other nations, large banks, etc. to literally steal money wherever it can (third link). It seems that North Korea thought Trump was so desperate for a deal of any kind that he would be enticed by a deal heavily tilted in North Korea’s favor. If so, North Korea made a false assumption. When it became clear that North Korea’s offer did not include full denuclearization of its uranium process facilities and included no offer to start dismantling its nukes, Trump walked away–leaving North Korea surprised by Trump’s sudden exit and the “no deal” outcome means Kim Jong Un goes back to North Korea empty-handed.

Now for the news about the successful signing that occurred in Hanoi. When Trump wasn’t meeting with the North Korean leader, he was meeting with the leaders of the Vietnamese government and its aviation business leaders. The fourth link reports that North Vietnamese airlines signed a deal to buy $15.7 billion in Boeing commercial aircraft. The deal for circa 100 B-737s and ten new Boeing Dreamliners, is a big boost to the US economy. The deal also includes future air routes to American cities for Vietnam’s airlines, as well as 5.3 billion follow-ons, multi-year contract for the American company, General Electric, to service the engines on the Boeing airliners bought by Vietnam’s airlines. The fifth link offers another perspective on this historic trade deal–one which closely links the business infrastructures of the two nations which fought each other in the Vietnam War in the 1960s and 70s. To demonstrate the importance of this deal to American-Vietnamese relations, President Trump and Vietnam’s President, Nguyen Phu Trong, personally presided over the corporate signing agreements. The sixth link shows a recording of the US-Vietnamese signing agreements. The video has weak audio content (at least it did on my computer), but please notice that the signing ceremony includes only American and Vietnamese flags–North Korea had no role in this important deal. These major deals were strictly American-Vietnamese matters, and many western media paid little or no attention to them. The personal presence of both national presidents at the signing agreements offers clear indications that the leaders of the US and Vietnam desire further and extended cooperation between their nations. Vietnam is in the process of beginning to purchase US weaponry, and the big commercial airliner deals will likely be a precursor to future military deals. Vietnam has typically purchased Russian weaponry, but China is Vietnam’s greatest threat (seventh link). Vietnam realizes that Russian-Chinese ties are stronger than Russian-Vietnamese ties, so Russia could cut off Vietnam from military equipment if China fights a war with Vietnam. This logic argues Vietnam needs military deals with the USA.

So, who won and lost at the US-North Korea summit at Hanoi? There were several winners. American and Vietnamese aviation businesses were clear winners in a mutually-beneficially deal and American-Vietnamese relations were also clearly strengthened. The nation of Vietnam gained international status by being able to host this summit, a fact they will no doubt appreciate. Trump personally won plaudits at home by not agreeing to a deal, but Kim Jung Un was a clear loser, as he goes back to North Korea with nothing to show his people. The USA won as it was able to demonstrate to the North Koreans that American intelligence about additional North Korean facilities was better than North Korea realized. I think Kim clearly enjoys the limelight in his summits with President Trump, but I think Kim now knows that he must sweeten the deal considerably with actual concessions to denuclearize his nation before any further summits occur. Kim is also desperate to have sanctions on his nation eased or removed, and he now knows the price for such an outcome is his own dismantling of North Korea’s nukes under international supervision acceptable to both sides.

There was one other winner in the outcome of this summit about which no secular media will tell you. That winner was Bible prophecy. As regular readers of my blog know, Ezekiel 38-39 offer an incredibly accurate description of how global nations will ally themselves into respective blocs in the “latter days” of our age. This 2,500-year-old prophecy accurately foretold that Russia, China, and Iran would form an alliance in the latter days and that they would have a variety of other nations with them. North Korea is so poor and dependent on China it has been a part of that Gog-Magog alliance and will likely stay one as the future unfolds. That same prophecy predicts this Gog-Magog alliance will eventually launch a surprise attack upon the many modern nations descended from the biblical “ten tribes of Israel” and their allies. My free article, What Ezekiel 38-39 Reveals about a Future World War III, offers in-depth analysis of the many biblical prophecies that pertain to the latter days of our age, but the Ezekiel 38-39 prophecy is the one which ties them all together. My article (and many subsequently-written posts) shows that the growing alliance which is being formed in the Indo-Pacific Region to collectively confront Chinese militarism and imperialism is continuing to come together as prophesied. Vietnam is taking steps to steadily be incorporated into the alliance being formed for collective defense vs. China. The recent Hanoi summit strongly reinforced that development.

To understand the role of modern nations (and the ancient biblical terms for them) in the pending major events to befall the earth, please read my aforementioned article. To be thoroughly convinced that we are indeed living in the “latter days,” please read my free article, Are We Living in the Biblical Latter Days? The Ezekiel 38-39 prophecy states clearly in Ezekiel 38:8 and 16 that its predictions will be fulfilled in a prophesied time called “the latter days.” Since the Ezekiel 38-39 prophecy is for the “latter days,” it is necessary to prove that we are living in this prophesied time period. I believe my article on this subject does exactly that. I also suggest reading my free article, The USA in Biblical Prophecy. Without understanding the prophesied role for the USA in our modern time, no one can possibly understand how prophecies will be fulfilled in the years ahead of us.