The “No Go” Zones of Berlin, Paris and Other European Cities 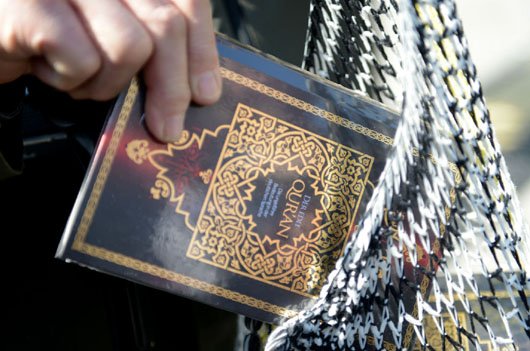 There are many reports on the Internet that Islamist immigrants into Europe have created many “no go” zones in European cities where locals and tourists dare not go and into which even the police are afraid to venture. The first link and second link report that Islamist gangs are creating such zones in various parts of Berlin, and that Sharia law practices are being imposed on some regions where Islamic immigrants have occupied. The reports state that the main problem in Berlin is not relocated Syrians, but Islamist Chechens from the Caucasus region of Russia.The third link adds that Paris and other French cities also have such “no go” zones that are not safe for non-Muslims to venture. Women are especially in danger if they attempt to enter such Islamic zones. The fourth link cites an official Hungarian brochure being circulated that warns people that parts of European cities are not safe to go to due to their being transformed into Islamic “no go” zones. The brochure’s map indicates that London, Berlin, Brussels, Paris and Swedish cities all have such dangerous areas. The fifth link offers an illustration of the elite’s denial of this phenomenon. The BBC, conducted an interview with a Hungarian cabinet minister and the BBC interviewer tried his best to counter these reports. I’ve watched the BBC programs on the American PBS channel for years, and I find the BBC to be very politically-correct and dominated by globalist perspectives. The sixth link reaffirms that such “no-go” zones do exist, and the other cited links report that official sources in European nations are now admitting that such zones do exist.

The seventh link reports that local Europeans are now getting “fed up” with the rapes and other criminality that is being perpetrated against the population of host European nations by Islamic immigrants. It reports on a German city where the local Mayor was being besieged by citizens to do something about this crime to protect the citizens. The Mayor seemed to be in denial about it all. As more Islamic migrants enter Europe and refuse to assimilate into European culture, this problem can only get worse. If the European governments do not resolve this problem, it seems inevitable that the citizens will either vote new leaders into governmental positions who will solve this problem or the citizenry will eventually resort to vigilantism.

Some European nations do “get it” and they have been taking strong measures to protect their citizens. As previous posts have documented, Hungary has built an almost 100-mile-long border fence that has stopped illegal immigration across its southern border (eighth link).  [Politicians in the USA ought to note that a relatively cheap double fence is sufficient to stop illegal immigration–it does not have to be an expensive wall].

Italy has been picking up many migrants from an assortment of craft in the Mediterranean Sea and bringing them to Italy. Fearing that these “refugees” will head northward into Europe through their territories, both Austria and Switzerland have sent (or are preparing to send) tanks and troops to their border crossings with Italy to stop an unchecked tide of Islamic migrants coming from Italy (ninth link and tenth link). Italy is angry about this as they doubtless were hoping to send them northward into other nations’ territories. I think Italy’s neighbors are essentially telling Italy this message regarding the immigrants Italy snatches from the sea and brings to Italy: “You catch them, you keep them.”

Italy may be humanitarian in its intent, but it is inviting the same “no go” zones into Italian cities that already exist elsewhere in Europe. This doesn’t need to happen. There is an easy solution to stopping this influx of Islamic immigrants into Europe. For example, many such immigrants flood into Italy via Libyan ports. Italian naval and coast guard vessels ought to pick up migrants at sea, give them food, water and medicine as needed and then routinely return them to Libyan shores for off-loading. If each European nation returned such illegal immigrants to the nation they embarked from, then word would spread quickly that such voyages are a waste of time and North African nations would stop allowing them into their territories as they don’t want a tidal wave of migrants/refugees in their nations either. In the case of Mideastern migrants, the impending defeats of ISIS in Mosul and Raqqa should lessen the need for people to leave those areas. Outside nations could also establish “safe zones” inside Syria and Iraq so their displaced citizens need not flee into Europe.

Many of the European nations who have accepted waves of Islamic immigrants into their cities and nations now have a huge problem with them refusing to assimilate or even observe local laws. This will inevitably lead to conflicts unless they are required to submit to European laws and culture. Many of these European nations are also descendants of the ancient so-called “lost ten tribes of Israel,” who migrated en masse into Europe from Asia when the Israelite empires of Parthia and Scythia collapsed (as the my books clearly document). Deuteronomy 28 lists a series of blessings and cursings that would befall Israelite peoples into the future depending on whether they obeyed or disobeyed God’s laws and instructions. Traditionally Christian Europe has abandoned the Judeo-Christian beliefs which gave them their greatness, wealth and power. They now are mostly ethically rudderless nations that have adopted an evolutionary secular humanism that no one wants to fight or die for. Deuteronomy 28:43 warned that one of the curses that would befall peoples and nations that abandon God’s laws would be “the stranger that is within you shall get up above you very high; and you shall be come down very low.” That is being fulfilled before our eyes as Islamic immigrants seek to impose Islam on their host European nations. I truly marvel that the European nations don’t implement effective solutions when such solutions are readily available. Some nations in the EU are slowly dying due to political correctness.

Some nations in Europe are trying to defend their borders and culture while others are not. One thing is certain. This crisis will only get worse, and it does have the potential of disintegrating the EU from within if Islamic refugees continue to pour into Europe. The United Kingdom may not be the only nation to vote to leave the EU. The Islamic immigrant crisis may drive other nations out of the EU as well.