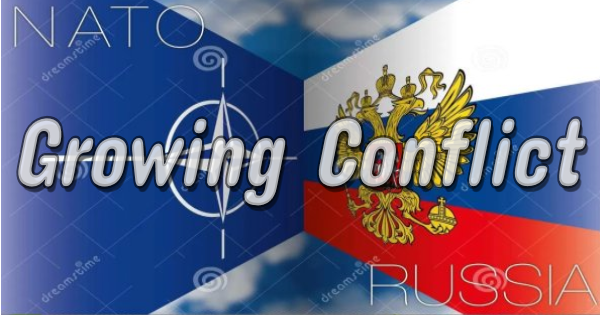 Amidst the latest frenzied efforts by Democrats to remove President Trump by nefarious and “trumped up” means (pun intended), important events, are occurring all over the world, that are not being given much media attention at all. This post is an effort to draw readers’ attention to the growing military tensions between American/NATO forces and Russian forces in Northeast Europe. Serious actions are being taken that few realize are occurring. The future ramifications of these actions are going to have major global impacts.

Poland and the USA are becoming ever-closer allies as it is clear that Poland intends to never again be successfully invaded by anyone. Poland has ramped up its defenses and is one of the few NATO nations that spends its pledged amount of money for military purposes. The USA is deploying additional troops to Poland, with deployments to be in six Polish locations (first link). Poland is not only welcoming this deployment, but is hoping for more beefed-up American military deployments within Poland, and for a permanent basing of US troops in their nation. Indeed, Poland is willing to spend $2 billion or more of its own money to build a “Fort Trump” to house a permanent US military base in Poland.

Lithuania will soon have an increased presence of US army forces on its soil, a development “welcomed by Lithuanian officials.” The second link reports that the US army presence in Lithuania will be a significant deployment–approximately 125 heavy armored vehicles and their support troops. Obviously, this deployment is to “deter Russian aggression,” and the link also mentions the US military has been deployed next to Russia’s Kaliningrad enclave and in various parts of Eastern Europe. Technically, the US military deployments in Poland and Lithuania will be stationed along those nations’ border with Belarus, not Russia. However, Belarus is a close ally of Russia and is virtually a vassal nation to Russia.

Also, a major military exercise was conducted in Ukraine with many NATO nations sending contingents to participate in the exercise. The location of this exercise was near the Polish-Ukrainian border. NATO and Ukrainian forces practiced war games together with both blank- and live-fire ammunition as well as laser equipment (third link). Ukrainian troops were given hands-on practice in using the latest NATO military gear and the exercise is clearly focused on preparing Ukrainian and NATO troops to work together in the event of a war with Russia. The link also raises the possibility that Ukraine will someday be a NATO member. The advanced, mutual military training in this exercise indicates it is only a matter of time until Ukraine does become a NATO member. If this happens, it will mean that NATO territory will extend eastward to less than 300 miles from the outskirts of Moscow. The geographical expansion of NATO eastward is a huge advantage for NATO, and I expect if Turkey ever leaves NATO (as is increasingly possible), Ukraine will join NATO as its newest member.

However, Russia retains a geographical advantage as well. The Russian enclave of Kaliningrad is located between Poland and Lithuania, so it is positioned as a huge Russian base within NATO’s northeastern European boundaries. Russia has fortified Kaliningrad with so many weapons that it can be described as “armed to the teeth” (fourth link). Russia has missiles in Kaliningrad aimed at many NATO cities and military bases. The fourth link and fifth link describe Russia’s weaponry now stationed in Kaliningrad and NATO efforts to prepare its own forces to neutralize Kalinigrad in the event of a war. NATO conducts periodic exercises in how to neutralize the Russian weaponry hosted in Kaliningrad, and one recent exercise included a US B-52 bomber flying to within 60 aeronautical miles of the Kaliningrad border. The USA already has a fully-operational air defense system, an Aegis Ashore installation, in Romania and another one will soon be operational in Poland (sixth link and seventh link). The USA also has a state-of-the-art air defense system called THAAD that has been deployed to Romania a similar such system could be deployed near Kaliningrad as well. Russia is reportedly “angry” that the USA is taking steps to defend Eastern Europe’s NATO nations.

The eastern bloc alliance of Russia, China, Iran, and their allies was prophesied in Ezekiel 38-39 to come into being during a climactic period of time called the “latter days” in the Bible. Ezekiel 38-39 is one of several “latter-day” prophecies for our time that are found in the Bible. They not only predicted accurately today’s global military alliances, but they reveal what is going to happen in the future between now and the end of our age–which will climax with divine intervention and the establishment of a divine government on the earth. My article, What Ezekiel 38-39 Reveals about a Future World War III, examines this prophecy together with other biblical “latter-day” prophecies to give readers an overall biblical picture of what is going to unfold in our world’s future. The Bible reveals God’s advance “script” for the latter days ahead of us, and this article reveals that script for all to see. Unfortunately, few take the Bible seriously any more, so they are blinded to what has been destined to occur. There is no reason why you need to share that blindness. For those needing evidence that we are living in the biblical latter-day period, I urge you to read my free article, Are We Living in the Biblical Latter Days? There is enough proof presented in that article to convince anyone with an open mind that biblical prophecy has long anticipated the modern events and technologies that have been developed in recent years. For some specific commentary on what the Bible reveals will be the role of the USA in prophetic fulfillments, please read my free article, The USA in Biblical Prophecy.