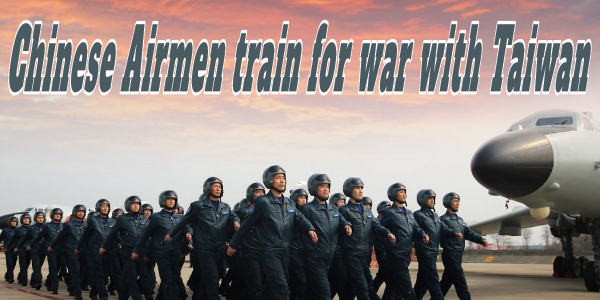 The Mideast, the South China Sea, and the Korean Peninsula are all well-known flashpoints where a major regional war could erupt. However, there is another area which does not receive as much attention but it represents just as great a danger for a regional war as the aforementioned areas. This other flash point is Taiwan. Communist China has long desired to impose its rule on Taiwan but has held off on invading Taiwan due to fears the USA will forcibly intervene to stop such an invasion. China has intimidated previous US administrations to adopt a “One China, Two Systems” approach to the matter which implies China’s future absorption of Taiwan is inevitable. However, President Trump has not been playing by China’s semantic rules.

The first link summarizes China’s on-going military preparations for an invasion of Taiwan. China has, indeed, built impressive numbers of new and modern weaponry which far outclass the military assets of Taiwan. The second link details some of the aggressive actions taken recently by China which highlight China’s ability to attack Taiwan. It mentions Chinese airplanes have crossed the center line demarcation point between the two nations in the Taiwan Strait and that China has also sent warplanes to completely circumnavigate around Taiwan’s airspace. It notes the USA has countered these actions by sending repeated flotillas of US warships to transit the Taiwan Strait between China and Taiwan. China’s aggressive actions have not gone unnoticed in Washington, DC. Unlike President Obama, who refused to sell Taiwan necessary weaponry to deter a Chinese attack, President Trump has authorized the sale of 60 new F-16’s to the Taiwanese Air Force (third link), and the USA is also upgrading Taiwan’s fleet of F-16s that it already possesses. The third link also mentions Taiwan may obtain more tanks from the USA. In a move that surprised me, the Democrat-controlled US House of Representatives reaffirmed the commitment of the USA to Taiwan’s independence (fourth link). This action means the US government is united in supporting Taiwan in any crisis.

There are many other nations in the Pacific Rim region which want Taiwan to stay independent of China even though they are not as formally committed to Taiwan’s independence as is the USA. The USA is regularly conducting naval exercises with other nations threatened by China’s aggressive militarization. The fifth link cites a recent such exercise in the South China Sea which included America, Indian, Japanese and Philippine warships. Notably, the Japanese Navy was represented by one of its new aircraft carriers (currently serving as a helicopter carrier but easily convertible to base F-35 naval warplanes). To confirm this point, the sixth link describes the US Navy’s implementation of plans to base 10-12 new F-35s on the US Navy’s Amphibious Assault Ships (which are essentially small aircraft carriers normally hosting helicopters to support amphibious marine corps operations).

There is no doubt that China can attack Taiwan and inflict much damage. However, it would be far harder for China to actually invade and take control of Taiwan. Taiwan has been aware of this risk for seven decades and has, no doubt, made many preparations to sink as many Chinese troop ships and landing craft before they can ever reach Taiwanese territory. Taiwan’s army would also defend Taiwan with fanatical zeal. If Taiwan has obtained high-tech weaponry in “black” operations on the world’s global arms markets, it may also be able to inflict significant damage to Chinese targets on the mainland in any such war. It is a near certainty that the USA would not stand idly by while Taiwan was invaded. In previous posts, I have opined that China may actually desire a regional war with the USA because China needs to see if its military really can compete equally with the USA and whether China’s new cruise missiles can sink US carriers or surface warships. China would have an advantage if it provoked such a war in its own backyard, and Taiwan is far closer to the Chinese mainland than the South China Sea.

Invading Taiwan would be harder for China that one would first think. Taiwan can vector its entire ground force to oppose Chinese troops wherever they would land on Taiwan, but China can only land so many troops at a time. Also, Chinese troop ships and landing craft would be sunk each time new waves of Chinese troops were sent to invade Taiwan–meaning China’s available supply of troop ships would steadily be diminished with each new wave of fresh Chinese troops transported to Taiwan.  A good historical parallel is that after Dunkirk, England was saved by the fact that it was separated from Europe by the English Channel. German tanks and troops simply could not cross that channel in sufficient numbers to achieve success, even though the British had lost most of their heavy weaponry in the Dunkirk evacuation. Taiwan has two advantages in repelling a Chinese invasion that the British did not have in deterring a German invasion of the British Isles. The first is that the Taiwan Strait is far wider than the English Channel so Chinese invasion ships would have to travel far greater distances to invade Taiwan than German ships would have had in World War II to invade England. That means Chinese troop ships will be exposed to Taiwanese weaponry for a long period of time before they reach Taiwan. The second is that while the British had lost most of their heavy weapons in France and had few army weapons remaining with which to oppose a German invasion in World War II, Taiwan has all of its weaponry currently available and positioned to repel an invasion.

As readers can see, there are a number of flashpoints around the world where regional or proxy wars can break out between (A) the Gog Magog alliance of Russia, China, Iran, and their allies prophesied in Ezekiel 38-39 to come about in the latter days of our age, and (B) NATO and their global western allies–which are led by the modern nations of the ten tribes of Israel. The world has forgotten what happened to the ten tribes after their exile from the old Promised Land in the 8th century BC. However, God never forgot about them and he has kept his promises to their descendants to make them very numerous, prosperous and powerful. The latter days (the same prophetic time as the prophecy in Ezekiel 38-39) is specifically one point in time where the ten tribes of Israel are promised in Genesis 48-49 to be powerful and prosperous nations. You can learn about the full history of the ten tribes of Israel in my books available at the homepage of this website. If you read them, you will understand the entire course of world history far better than you ever will by reading the standardized world histories which neglect their history and don’t recognize their true role in world history. You will also gain greater insights into topics discussed above in my free articles, Are We Living in the Biblical Latter Days?, What Ezekiel 38-39 Reveals about a Future World War III and The USA in Biblical Prophecy. Have you heard or read that the US is not mentioned in Biblical prophecy? If so, you heard wrong. The USA is definitely described in biblical prophecy, but only the hopelessly naive would expect it to be named “The United States of America” in ancient prophecies. If you read my books and the above article on the subject, you will understand where the USA is mentioned in biblical prophecy.