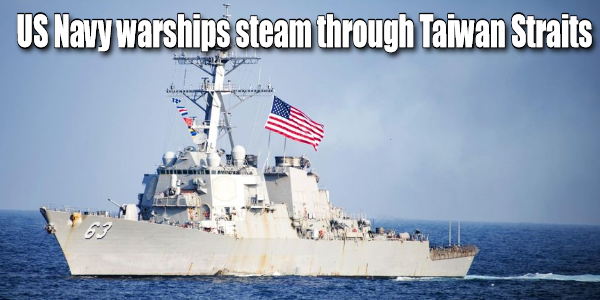 With a variety of global flashpoints receiving most of the world’s attention concerning possible new regional wars, the island of Taiwan tends to be forgotten. However, it is one of the longest simmering flashpoints that has existed since soon after World War II. For a brief historical refresher, Nationalist China was an ally of the USA and western powers in World War II and was given a seat on the UN Security Council when it was formed after World War II. However, the Communists, under Mao Tse-Dong, revolted and overthrew the Nationalist Chinese government which was weakened by fighting Japanese Imperial forces in World War II. The Communists won, and the Nationalist government, headed by Chiang Kai-Shek, fled to Taiwan with the surviving elements of their army and kept that island from falling into the hands of the Communists. I’m old enough to remember when President Eisenhower came close, to a conflict with Communist China over the disputed islands of Quemoy and Matsu. China and North Korea fought American and UN troops in the Korean War, and relations have been very chilly between the USA and China ever since.

China believes Taiwan should be part of Communist China, but the Taiwanese want to stay anti-Communist and part of the western world. Periodically, China threatens to invade Taiwan to enforce Communist rule on the Taiwanese but has been so far deterred by the tacit but well-understood threat of American military intervention if China ever attempts such an invasion. Presidents Bush and Obama seemed to have been resigned to allowing Communist China to slowly assimilate Taiwan over time, but President Trump has reinvigorated the American commitment to Taiwanese independence. The US Navy has been conducting more frequent “freedom of navigation”‘ patrols in the South China Sea and in the Taiwan Strait to assert the fact that these are international waters and not Chinese-owned maritime bodies. The first link reports on the latest such patrol by a US Navy destroyer and a Naval cargo/ammunition ship in the Taiwan Strait as well as noting that the US has supplied $15 billion in arms to Taiwan in recent years. The second link also details this latest US Naval patrol in the Taiwan Strait and adds that the Navy may be sending an American aircraft carrier (presumably with its escorting warships) into those same waters in the near future.

It is interesting that this latest patrol asserting the rights of passage in international waters such as the Taiwan Strait are occurring even as intensive trade talks about tariffs and trade restrictions are being conducted between the Trump administration and China. Also, President Trump is in Hanoi, Vietnam to meet with North Korean dictator, Kim Jong Un, about the denuclearization of the Korean Peninsula. North Korea agreed to that goal in the previous Trump-Kim talks, but it has dragged its feet ever since on implementing any such goal. China will be watching these talks very closely, to be sure. I cannot help but make a historical observation. Having been part of the generation that endured the seemingly-endless Vietnam War begun by President Lyndon Johnson, it is a graphic illustration of how “things can change” within a few decades that an American President is flying to meet a Communist North Korean dictator in Vietnam, which is serving as a “neutral” host between the two heads of state. The sight of President Trump being welcomed by the Vietnamese to Hanoi is a very dramatic turn-around since the Vietnam War ended in 1974. Indeed, relations between the USA and Vietnam have steadily warmed in recent years as Vietnam is now heavily threatened by China’s growing militarism and is edging toward becoming a part of an Indo-Pacific alliance vs. China. I have little doubt that Vietnam’s leaders will have talks with President Trump about the growing threat posed by China while Trump is in Vietnam to meet the North Korean leader.

China’s growing militarism looms large over everything that is happening in the Indo-Pacific region. One of my recent posts focused on the effort by Australia to beef up its military due to the threat from China. However, it must be remembered that China is a major military power…on paper. China has not fought a war since the 1970s when it fought Vietnam to a draw in a brief but bloody war after the US withdrew from then-South Vietnam. China should not quite yet be seen as a military power…in fact. Its military is entirely inexperienced in combat and none of its recently-deployed new military hardware has ever been tested in real combat conditions. The third link notes that the two Chinese carriers now in sea trials are not yet really ready for “prime time.” It is not evident whether the pilots of their carrier planes are yet capable of night carrier landings or whether they can perform carrier landings in adverse weather conditions. Even the Chinese media has disparagingly referred to the “lightly loaded” carrier warplanes by the nickname of “flopping fish.”

If China attempted to invade Taiwan, which is armed to repel any such invasion, China would need to transport its invasion troops across an approximately 300-kilometer body of water by air and sea. China would experience severe casualties in weaponry and personnel before it could put enough troops on Taiwan to fight for control of that island. It is almost certain that the US military would still come to the aid of Taiwan if it was invaded. The increasing patrols by US naval warships in the waters between Communist China and Taipan attest to that fact. We should not forget that throughout history, major wars have been started due to rather small incidents. World War I began with the assassination of an Austro-Hungarian Duke in the Balkans by a terrorist. The threat of war between the USA and China over Taiwanese independence cannot be discounted, as it could start “by accident” via action by a trigger-happy warplane pilot or captain of a naval ship who makes a bad decision in a stressful situation.

Long-time readers of my blog know that I apply a biblical perspective to modern geopolitics as biblical prophecies are being steadily fulfilled in our modern times. The Bible prophesies in Ezekiel 38-39 that a final World War III will erupt at the end of our age and that it will provoke divine intervention in, and future control over, mankind’s affairs. Ezekiel 38 prophesies that Russia, China, and Iran would form an alliance in the latter days and this has, indeed, happened. It also prophesies this alliance will launch a surprise attack upon the nations of the western world and their allies to begin World War III. Many Bible prophecies discuss various aspects of how World War III will begin, how, where and why it will be fought and how it will end (Hint: It will end very badly for Russia, China, and Iran). If you wish to review the many Bible prophecies about World War III, please read my free article, What Ezekiel 38-39 Reveal about a Future World War III. I also urge readers to read my related free articles entitled, The USA in Biblical Prophecy, Japan in Biblical Prophecy, and Are We Living in the Biblical Latter Days?