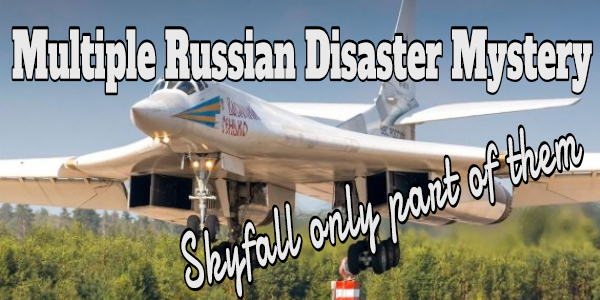 Advanced military projects always carry inherent risks. There is always the danger of something going wrong or some unanticipated sequence of events causing a major accident in a military project. However, Russia has recently experienced a series of very major military disasters. These disasters have set back Russia’s military plans and even killed many of its senior naval commanders and some of its top weapons scientists. Obviously, none of us have any idea regarding what went so wrong in the Russian military that so many costly accidents have recently occurred. Let’s examine these military disasters and consider what it may mean for global geopolitics at this juncture in world history.

The first major disaster has already been documented and discussed in this blog. It involved a catastrophic failure of some kind of a new model of a Russian submarine. This disaster killed a large number of Russian naval captains who were on board this submarine for some kind of military experiment or training exercise. Something went terribly wrong and many of them died. Russian communiques signaled that the survivors of this tragedy had somehow averted a planetary disaster, strongly inferring that the submarine was carrying some kind of doomsday weapon. It had to be a critically-important new weapons system for so many Russian naval captains to be aboard a single experimental submarine at the same time. My initial post on this first Russian military disaster is the first link.

The second link is a video of a series of massive explosions that occurred in an explosives/munitions plant in a remote area of Russia. It is unknown if this video shows the entire series of explosions that rocked the facility or whether it only shows a segment of the overall disaster. What is shown is bad enough. As you watch the video, notice that there are two very powerful blasts which emit intense concussive waves in all directions–which argues these blasts were caused by an extraordinary type of munition or warhead that blew up at the facility. The third link relates that 79 people were injured in the blast at this “arms depot.” Several people were killed, but the exact number of killed and injured may never be known as Russian authorities are famously tight-lipped about the real extent of such major accidents. The fourth link, fifth link, and sixth link indicate that this same arms facility experienced a second wave of explosions a few days later which caused additional casualties. Since the third link reports that this same facility also experienced explosions in April, it would appear that there have been at least three major explosive incidents at this arms depot/munitions plant in just the last few months.

As if the above series of accidents/explosions weren’t enough, the Russian scientific/military community experienced yet another major setback in a new weapons program. The seventh link has a map which reveals where the incident happened. Russia was apparently testing a new, top-secret type of hypersonic cruise missile which is nuclear-powered. The eighth link, ninth link, tenth link, and eleventh link offer various perspectives on this disaster. The death toll is variously reported to be between 2 and 7 Russians killed and that those killed were Russian weapons scientists–perhaps nuclear scientists or missile engineers. To be assigned to such a top-secret project means that the scientists killed were among Russia’s best military talent. The missile is called “Skyfall,” and Russia’s Vladimir Putin has boasted of its abilities to defeat all American anti-missile defenses. However, the eleventh link (from the German media) reports that Russia has tested this new missile five times and all fives tests ended in failures. This link also reports that Russia admits the accident with the new cruise missile raised background radiation levels 4-16 times, but adds that Greenpeace claims it raised radiation levels twenty times the normal level. The twelfth link offers an analysis of this Russian military accident by US National Security Advisor, John Bolton.

This series of military disasters/accidents have clearly affected Russia’s current military capabilities as well as its ability to advance some of its most important military projects. The accident which led to so many deaths among Russia’s top submarine captains eliminated much of the leadership of Russia’s submarine service. I think it is obvious that only the most-skilled and most-trusted submarine captains would have been present at the test of this new Russian experimental submarine and its doomsday weaponry, so Russia’s best submarine captains were the ones killed in this major disaster.  It will take time to replace so much experience in Russia’s submarine forces. The many explosions at a major Russian munitions plant argue that Russia has lost a lot of its available munitions that were stockpiled for military usage in a future war. The explosions show this was no minor ammo dump that blew up. Russia’s ability to manufacture the munitions that were made at this weapons plant have also been seriously degraded. It will take time for Russia to rebuild the many munitions that were blown up in the explosions at this weapons plant, and the many explosions in three separate disasters at the same site indicate that the plant itself may have to be rebuilt. It is evident that Russia is also having major problems with its new nuclear-powered cruise missile. The accident on the northern coastal region of Russia also means that Russia has lost some of its top scientists that were trying to perfect this new cruise missile. They also will not be easily replaced.

That Russia is trying to build a cruise missile propelled by a small nuclear reactor raises additional concerns. Even if it is armed with conventional munitions, the fact that it has a small nuclear reactor in it propellant stage means that wherever it hits, it will create an incident known as a radiological “dirty bomb” as its contents are spilled all over a targeted site. If Russia causes a radiological dirty bomb at a targeted site, it will have crossed the “nuclear threshold” and invites retaliation with actual nuclear weapons by any nation it attacks with nuclear-propelled missiles. I wonder if Russia considered that fact when it designed this cruise missile?

There are biblical ramifications in the above incidents. Long-time readers of my blog are familiar with the prophecy of Ezekiel 38-39 that Russia, China, Iran, and its allies will attack the USA, NATO and their global allies in the latter days of our current age. God will decide when this attack will occur based on his prophetic plan and timetables. Ezekiel 38:4, 10-11 reveal that it is God who will put the thought into the leader of the Gog-Magog alliance to launch this attack. Clearly, Russia has to be in a military state of readiness where it thinks it can successfully launch this surprise attack vs. the West. The recent spate of severe military disasters will obviously delay Russia’s ability to confidently initiate any such attack. It is possible that Russia was planning to launch the attack prophesied in Ezekiel 38-39 earlier than God’s plan would allow so God caused or allowed these disasters to occur to slow down Russia’s military preparations for any such attack. It’s God’s planet and the nations are very small entities in the eyes of the Creator Being who made the earth and everything on it (Isaiah 40:15-22). God can and will easily intervene in human events to make sure his timetable for prophetic fulfillment is implemented. Personally, it is my current understanding that the Ezekiel 38-39 attack will not occur until after the death of the Two Witnesses of Revelation 11, whose power will be so great that they will be able to prevent any world war which would stop or interrupt their ministry. For more detailed information on the biblical prophecies that will be fulfilled in the years ahead of us, please read my free articles, Are We Living in the Biblical Latter Days?, What Ezekiel 38-39 Reveal about a Future World War III, The USA in Bible Prophecy and The Two Witnesses.

One last thought. My recent post on the Russian submarine disaster (first link) included the cryptic claim by Russian sources that the survivors of that submarine accident prevented  a “planetary catastrophe.” This begs the question: What could a Russian sub possibly do that could cause a “planetary catastrophe?” Here is my thought on that question. If the new Russian submarine could dive to a very great depth, it could theoretically position very powerful hydrogen bombs in the abyssal deep parts of the earth’s oceans. By doing so, it would put these mega-bombs at locations where the earth’s crust is the thinnest. Such mega-blasts could tear the earth’s crust apart and possibly release geysers of the molten magma that is underneath the earth’s tectonic plates. Such massive detonations would also trigger global earthquakes of an unprecedented magnitude. Such bombs pre-positioned by a Russian submarine would be a true doomsday weapon that could trigger a “planetary catastrophe.” In Matthew 24:22, Jesus Christ prophesied that his Second Coming would come earlier than planned on the latter-day timetables (“except those days be shortened”) in order to prevent a doomsday event on the earth that is about to destroy all flesh on the planet. Perhaps his coming will occur to prevent Russia from igniting a series of mega H-bombs at thin parts of the earth’s crust. At the very least, this is one more possible reason why Jesus Christ’s Second Coming will have to occur suddenly at the end of our age (my previous posts have outlined other possibilities for fulfilling this prophecy). The Apostle Paul was right in II Timothy 3:1 when he warned the latter days of this age would be “perilous times.”