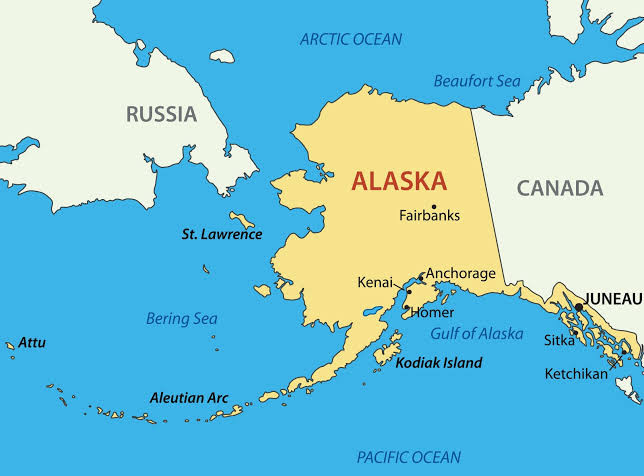 Russia has made a very remarkable threat against the USA. Russia has threatened to militarily seize Alaska from the USA as part of a campaign to intimidate Western nations not to use frozen Russian assets in the West to rebuild Ukraine whenever the war in Ukraine ends (first link). This threat was made by high-ranking allies of Russian President Putin, and these threats would not have been made without Putin’s prior approval.

The Russian threats are a disinformation theme which argues that the USA somehow “took” Alaska from Russia. Nothing could be further from the truth. The USA purchased Alaska long ago during the Lincoln administration, and the deal was entirely between a “willing seller and a willing buyer.” No conquest was involved. There is no comparison between the USA buying Alaska from Russia in the 19th century and Russia’s current, brutal invasion of Ukraine, its bombing of Ukraine’s civilian infrastructures and its driving millions of Ukrainians into refugee status in other nations. I can recall when Alaska and Hawaii joined the USA as states in 1959 as I read about it while in Elementary School. Both new states were upgraded to statehood status from the American territorial status that they had long had. Russia’s threats are surely intended to scare Western nations into not giving frozen Russian assets in Western banks to Ukraine to build its infrastructures after Russia destroyed them. Some Western nations have already proposed doing exactly that.

The second link cites Russia as saying the USA invites the “wrath of God” if it and other Western nations establish an international tribunal to investigate Russia’s war crimes in Ukraine. Russia tries to cite the dropping of the atomic bombs at the end of World War II and the Vietnam War as examples of the USA spilling the blood of other nations. However, there is no moral equivalency here at all. The USA was living at peace with the Japanese Empire when Pearl Harbor was attacked in 1941, and the A-bombs were dropped to end a war which had raged for four years between the USA and Japan. The Ukraine did not launch any “Pearl Harbor-like” attack vs. Russia which forced Russia to wage war vs Ukraine. Russia started the war with an invasion, undoubtedly expecting an easy win. Also, the Russian propaganda ignores the fact that the government of what was then South Vietnam invited US military forces to help fight the North Vietnamese and Viet Cong at that time. The Ukrainian government most definitely did not invite Russian forces to enter Ukraine. The Russian propaganda is so absurd in its comparison that it is undoubtedly intended for further deceiving the Russian population concerning what is really happening in Ukraine and the world. The third link further documents the Russian military threats against Alaska.

I ask readers to consider something revealed by these Russian threats to seize Alaska by force. That Russian leaders are openly stating this in public means that the Russian military already has war contingency plans for seizing Alaska. Russia would almost certainly move in concert with China in executing such plans. Russia could implement such plans by having their Spetsnaz forces seize Alaskan airports large enough to handle Russian transports which would be off-loading tanks, armored vehicles, helicopters and troops as soon as the air fields were seized. Alaskan ports would also be seized to dock Russian ships loaded with war supplies and many Russian troops. How quickly the US military could respond to such an invasion is problematic, indeed. My perception is that under President Biden, the administration’s priority for the military is indoctrinating it with politically-correct nonsense and getting every one vaccinated for Covid, not winning wars. Russia might be able to seize most of thinly-populated Alaska in a conventional war within mere days. Since US war planners now know beyond a doubt that Russia has war plans to seize Alaska, the US planners need to develop a defensive plan to defeat such an invasion. Russia has “tipped its hand” with its open threats vs. Alaska. The Russian threats also reveal that Russia and China may be planning to invade not just Taiwan in the future, but even the US state of Alaska as well.

Students of biblical prophecy should especially take notice of Russia’s threat to militarily seize Alaska. This is an event which is already prophesied in Ezekiel 38-39 to occur in the latter days of our age.  All serious biblical scholars regarding prophecy know that Ezekiel 38-39 is for the latter days–our modern time (please see my article, Are We Living in the Biblical Latter Days?). Ezekiel 38:8 and 16 make that fact unmistakable.

Virtually all biblical scholars also can see that the Gog-Magog alliance listed in Ezekiel 38:1-6 consists of Russia, Iran and their modern allies (China, North Korea, etc.). However, almost no serious scholars re: biblical prophecy understand who the target of the Gog-Magog attack really is. Since Ezekiel 38-39 repeatedly mention that the people, nations and land of “Israel” is targeted, such scholars superficially look at a modern map and assume it is the Jewish state of “Israel” which is the target. Such a conclusion is easily seen to be erroneous with a little bit of deeper research. The book of Ezekiel was written circa 580 BC. Who was “Israel” at that time and to whom would Ezekiel have been referring? In Ezekiel’s lifetime, “Israel” was easily understood to be the exiled descendants of the old northern kingdom of “Israel” who had inhabited new lands at that time and were rapidly growing in population size, fulfilling the prophecy of Hosea 1:10. In Ezekiel’s lifetime, no one would have confused “Judah” (the Jews) with “Israel.” “Israel” was originally the new name of the patriarch named Jacob. When God changed Jacob’s name to Israel, those terms became very interchangeable. When Ezekiel’s prophecy was written, all his readers would have understood Ezekiel’s prophecy was about an attack of a Gog-Magog alliance vs the latter-day descendants of the so-called “lost ten tribes of Israel.” If you read Ezekiel 38-39 and insert “Jacob” wherever you see the word “Israel” (Jacob’s other name), you will realize the prophetic word for the modern Jews (“Judah”) appears nowhere in Ezekiel 38-39. Ezekiel 38-39 does not apply to the Jews/Israelis of out modern time. When God inspired prophecies about the Jews in the latter-days he consistently used the term “Judah” (as in Genesis 49:8-12, Zephaniah 2, Zechariah 12 and 14).

If the modern Jewish state had named itself Judah or Judea, this confusion would not exist. However, the Jews named their new nation after the historic name of the ancient land of Israel, not their own tribal name of Judah. When Israel was founded in 1948, there was a widespread expectation the new Jewish nation would be called Judea (fourth link). If the Jewish nation had been called Judea, there would be no modern nation named “Israel” on the maps and scholars would have to do more careful scriptural and historical research to realize who that name applied to in the modern world. My printed books and an E-book tracing the history, migrations and modern locations of the ten tribes of “Israel” are available at the home page of this website. Genesis 49 and Revelation 7 both foretell the ten tribes will live in identifiable locations on earth in our latter-day time, and Genesis 49 offers divinely-inspired clues to help us locate them. The modern descendants of the ten tribes are located in the modern NATO nations and their close allies. You can see where the USA fits into this picture in my article, The United States of America in Biblical Prophecy. Many other modern tribes of “Israel” (i.e. “Jacob”) are identified in articles at the “Articles” tab at my website’s home page.

Once we understand that that Ezekiel 38-39 is a prophecy about a latter-day attack of Russia, China, Iran, et. al vs. primarily the USA and NATO nations, Russia’s threat to militarily seize Alaska comes into sharp focus. It shows that the Gog-Magog alliance is already planning to attack the USA and the NATO nations. Indeed, Ezekiel 38-39 make it clear that such an attack is a certainty, not just a possibility. The Bible offers many details about this age-ending global war, and these facts are detailed in my article, What Ezekiel 38-39 Reveal about a Future World War III. What the Bible does not tell us is what year will see this prophecy fulfilled. Given that Russia is already revealing it has plans to attack North America via Alaska, such an attack may not be many years away.

In the famous Exodus account of God leading the Israelite tribes out of an Egyptian captivity, God “hardened the heart” of Pharaoh so he could set Pharaoh up for personal and national destruction. Ezekiel 38-39 show God is also going to do the same thing to harden the leader of the Gog-Magog alliance to attack the modern nations of the tribes of Israel, but it is the Gog-Magog alliance which is fated to utterly lose that age-ending war. God’s Divine Script has already pre-determined its outcome. The modern nations descended from the ancient ten tribes of Israel will survive and prosper in the Messianic Age/Millennium which will follow this age-ending World War III (see Revelation 19:11-20:4 for a parallel chapter in the New Testament to Ezekiel 38-39’s prophecy). Many who are reading this blog will live to see these prophecies fulfilled.