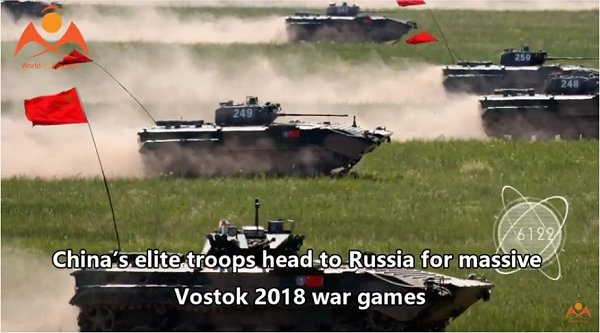 Russia will soon be holding its largest war games in over 35 years. The Vostok war games are expected to involve perhaps 150,000 Russian military personnel and will include simulated nuclear weapons usage as well as conventional live-fire exercises. Significantly, China is sending a large contingent to blend their military forces with Russia’s in this exercise. China is reportedly sending 3,200 of its elite military forces as well as 900 pieces of military hardware and 30 warplanes. The number of pieces of military hardware (such as tanks, artillery, armored personnel carriers, transport and medical evacuation vehicles, etc.) is an especially high number for a participation in a military exercise on foreign soil. The first link and second link offer details about these impending maneuvers, and the third link offers a wide variety of additional international perspectives on this topic if readers wish to access them.

The exercise will also include some Mongolian forces. One link notes that Mongolia has sought closer ties to the USA, but the fact that this massive military exercise is being held not far from Mongolia sends a clear message to Mongolia that its future belongs in the military alliance which includes Russia, China, Iran, etc. I think Mongolia will “get the message.” The links also mention Russia and China have coordinated the projection of bomber forces into the South China Sea and the Taiwan Straits. This action is clearly intended to impose further military intimidation upon Taiwan and other nations whose territories border the South China Sea.

As I have noted for over 30 years in my writings, Ezekiel 38-39 prophesies that a strong military alliance will be created in the latter days of our current age which will include Russia, China, Iran and many other nations. This Gog-Magog alliance has come into existence in recent years, fulfilling Ezekiel’s prophecy most precisely. That this alliance was prophesied to coalesce only in the latter days at the end of our current age (Ezekiel 38:8 and 16) also confirms that our modern age is, indeed, the biblically-prophesied “latter days.” This Gog-Magog alliance is prophesied to attack the modern nations of the modern ten tribes of “Israel” at the very end of our age, provoking divine intervention (God’s “presence” on the earth is cited in Ezekiel 38:20). The term, “Israel,” in biblical prophecies refers to the nations of the modern ten tribes of Israel, who are prophesied to be numerous, prosperous and locatable in the latter days (Genesis 48:14-49:28). The term “Israel” does not mean the Jews/Israelis, who are referred to as “Judah” in latter-day prophecies about the Jews/Israelis (Zephaniah 2, Zechariah and 14). Unless someone understands the key difference between the terms “Israel” and “Judah” in biblical prophecies, they have no chance of accurately comprehending or applying latter-day prophecies to the modern world.

The huge Russian-Chinese military war games show they are taking steps to enable their forces to perform coordinated military actions in a future war. There is no other explanation that makes sense. Ezekiel 38-39 reveals that such a future war is certain to occur, and it reveals many details about how and where the war will be fought. This expanding and close Russo-Chinese military cooperation further confirms the accuracy of biblical prophecy. Only a Divine Creator God could have inspired this prophecy circa 2,500 years ago and also bring it to pass so accurately in our time. At some point in the future, this alliance will attack NATO and the western world and it allies in a global surprise attack. Ezekiel 38-39 guarantees it. The nations do not realize it but they are acting out a divine “script” that was written for them millennia ago.

Oh yes! There is one other aspect of this Russo-Chinese military exercise which could be sending a subtle message. It is scheduled to begin on September 11th, the anniversary of the surprise attack on the USA when the World Trade Center was destroyed in New York City on September 11th, 2001. Readers may draw their own conclusions about whether this choice of date is merely a coincidence or whether it is not.

For in-depth examinations of the topics discussed above, please read my free articles: What Ezekiel 38-39 Reveals about a Future World War III, The USA in Bible Prophecy, Japan in Bible Prophecy, Are We Living in the Biblical Latter Days? and Four Reasons the Jews are Judah.  My four printed books and additional e-book detailing the comprehensive history of the ten tribes of Israel also identify the nations where their descendants are living in the modern world. They can be obtained via the links at this website’s homepage.

My thanks to a reader who sent me a link which stimulated this post.