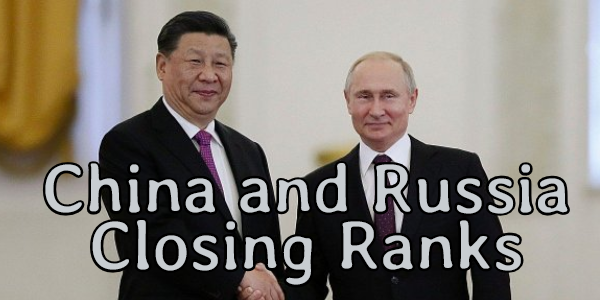 In a development that received little attention in the western/American media, the leaders of Russia and China just held a major summit meeting where they all but declared themselves to be full strategic allies. Their joint declaration termed their new closer relationship is a “comprehensive strategic partnership of coordination for a new era.” In my view, the terms “strategic partnership” and “strategic allies” are distinctions without a difference. They mean the same thing. The first two links, from Chinese media sources, list the very broad aspects of their new “strategic relationship.” It includes unifying their nations’ goals and efforts in virtually every aspect of their domestic economies and global/international activities.

The first link cites Russian President Vladimir Putin as stating that Russia and China’s relationship has now reached “an unprecedentedly high level,” and the story even uses the word “alliance” in trying to describe the mechanics of this new strategic partnership. The second link offers China’s national perspective on this new Russian-Chinese partnership signed by President Putin of Russia and President Xi Jinping of China. The third link focuses on what will be the joint efforts of Russia and China to confront the USA. Russia and China intend to take measures to “de-fang [the] US dollar sanctions weapon” by jointly agreeing to not use US dollars in their global transactions. The link also relates some of the difficulties these nations must confront to implement that goal in the international banking sector. Both nations cite “escalating hostility from Washington” as one reason for their higher level of cooperation. If they are able to coordinate their joint actions to remove the US dollar from their national and international transactions, it would be a blow to the standing of the US dollar as the global reserve currency.

The fourth link was written several months prior to this recent Russian-Chinese meeting that led to their new “strategic partnership.” It indicated that an effort was underway to forge “an alliance against the West,” and observed that Russia and China “are obsessed with overturning the American-led global order.”  The fifth link adds that Russia and China are in “lockstep” in their international goals and that they wish to “remodel the world to their will.” The link closes with the implications for an eventual war that could be fought between the USA on one side and Russian and China on the other side. The link states (quite accurately I would observe) that any such war would be “highly challenging” for the USA.

As long-time readers of my blog already know, I have been warning about an eventual war between the USA and its allies vs. Russia, China, Iran and their allies for approximately three decades. The key behind my warnings was the biblical prophecy of Ezekiel 38-39 which specifically foretells that a great global war between these two alliances will occur at the very end of our age.  Ezekiel’s prophecy reveals that it will be the Russian and Chinese-led alliance that will start the war with a surprise attack and that the destruction will so great that it will provoke divine intervention by the Creator God on the side of the USA and its allies. Indeed, this prophecy is so specific on so many aspects of this war that it even reveals that the Russian/Chinese-led alliance will suffer a casualty rate of 87.5%. Does this mean that will be the casualty rate for their military forces or for their entire nations? That question is left open in the prophecy, but such high death rates would fulfill the kind of apocalyptic death rates that are prophesied for the human race at the end of our current age in the book of Revelation–which addresses the exact same time frame as the prophecy in Ezekiel 38-39. That a biblical book written circa 2,500 years ago could be so accurate in foretelling the exact make-up of the two current major global alliances in our age indicates that only a Creator God could have made such a prophecy and brought it to pass in our age. That it is being fulfilled in our time confirms that we are, undeniably, living in the “latter days” that the prophecy in Ezekiel 38-39 addresses (Ezekiel 38:8 and 16). That this prophecy is so accurate in describing the make-up of the world’s modern global alliances also indicates that it will be just as accurate in its predictions for how World War III will begin and unfold.

These links confirm that Russia and China are amassing the alliance that will eventually challenge and attack the American-led western world and their global allies. I think Russia’s and China’s intent is very clear in their statements about their new strategic partnership. They are preparing for a take-down of the current American-dominated global financial/monetary system and, eventually, for open war. Russia is the world’s largest nuclear power already, and China is rapidly building both nuclear and conventional forces to challenge the USA for global dominance. None of us knows how soon World War III will begin, but the stage is being set already and we can expect Ezekiel 38-39’s prophecy to be fulfilled in the years ahead of us. God himself states that he will decide when this age-ending war will start by directly putting the thought to launch the war in the heart of the leader of the Gog-Magog alliance led by Russia and China (Ezekiel 38:4 and 10).

If you would like more information regarding the biblical prophecies about our modern world’s alliances and how World War III will be fought, please read my free articles, Are We Living in the Biblical Latter Days?, What Ezekiel 38-39 Reveal about a Future World War III, The USA in Biblical Prophecy and Japan’s Role in Biblical Prophecy. If you read these articles, you will be able to understand the divinely-ordained “script” that is being played out on the world stage in front of our eyes.