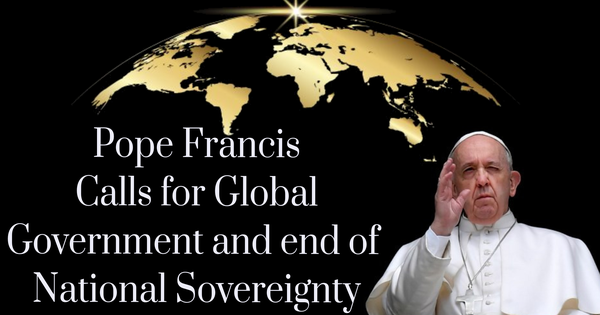 At times something happens which is so important to the march of latter-day biblical prophecies toward a fulfillment that it must be pointed out. This is one such occasion.

Various biblical prophecies warn that in the latter days many “false prophets” will arise to deceive mankind about religious/spiritual truths, what is happening on the earth, etc. (Matthew 24:11 and 24, Mark 13:22, II Peter 1-10, I John 4:1). These deceptions will eventually become so pervasive in our world that they will become nearly universal in successfully duping mankind as to what the truth really is (Revelation 12:9, Matthew 24:24). However, the book of Revelation mentions one especially prominent “false prophet” who will arise in the latter days. This most prominent of all false prophets will be allied to a global political leader called “the beast.” Revelation 16:13 prophesies that a “trinity” of evil beings will exist in the latter days as the world slips away from any form of godliness or worship of the true Creator God of the Bible. They are called “the dragon, the beast and the false prophet.” Clearly, the “dragon” is Satan himself, the “beast” is the political leader who heads the end-time “beast” system and the third member of this evil trinity is “the false prophet.” The vast majority of the world’s population has no idea of what the Bible says or prophesies so they will be easily deceived by this evil trinity that will dominate the world for a short time at the end of our age.

II Thessalonians 2:1-11 also prophesies about a particular latter-day “man of sin” or “son of perdition” that “exalts himself above all that is called God,” demands to be worshiped and “sits in the temple of God” as if he actually were God. What blasphemy! Verse 9 says this “man of sin” will be empowered by Satan to perform “signs” and “lying wonders.” The “signs” will be legitimate miracles, but the “lying wonders” will be faked in cooperation with the high-tech tricks of the beast power’s scientists and high-tech deceivers (the word “lying” comes from the Greek word “pseudos” which means a lie or falsehood according to Young’s Analytical Concordance to the Bible). Verse 8 foretells this evil leader will be destroyed by the Lord [Jesus Christ] at his coming. Revelation 19:19-21 prophesies the beast and false prophet will be slain by Jesus Christ and his heavenly army at the very end of this current age. Revelation 19:20 relates it is the “false prophet” who will perform the miracles of deception in service of the beast system so this indicates the miracle-working “man of sin” in II Thessalonians 2:9 is the false prophet.

With the above introduction, let us examine an event that has just happened, but which the masses scarcely noticed. Pope Francis just called on all nations of the world to surrender their national sovereignties to the United Nations so the UN can impose a “global governance” on the entire world. Specifically, Pope Francis has told the world’s nations to “hand over the reins of power to the United Nations…[which will] lead us into the New World Order” (first link). This is a most blatant example of a global religious leader allying himself to a global political leader (whoever the UN selects) to establish a new global world system. This edict of Pope Francis carries no legal weight, but if he starts performing miracles or what appear to be miracles, he will suddenly be taken seriously. The second link covers this same papal edict and adds that “climate change” is one reason the pope uses as a justification for global government. It cites Pope Francis as saying the UN “must be granted full governmental control for the ‘good of humanity’ (emphasis added).” Again, the most blatant call by a global religious leader for the nations to yield power to a global government. Who will be the global political leader–the one who becomes the prophesied “beast?” I do not know. It may be a globalist political leader or this person may be a super-rich, technocrat, like Bill Gates or one of the other globalist Big Tech leaders.

This strong push for global government by Pope Francis is so blatant that even a prominent Catholic Cardinal criticized it. Cardinal Raymond Burke warned about the Pope’s “ecological conversion,” and compared his push for global government to an effort to end God’s authority on earth and create a new “Tower of Babel” (third link). This Cardinal has some insight. Just as mankind’s act of open rebellion vs. God in building the tower of Babel brought God’s divine intervention to stop it, it is prophesied that God will also judge the final one-world government of mankind at the end of our age. Revelation 13:1-4 foretells God will allow this blasphemous world system to exist for 42 months and then God will crush it out of existence forever.

The second link also offers another important glimpse into what the globalist insiders have planned for us. It says that “David Rockefeller once said that it would take a ‘global financial crisis’ before people would accept what he called a ‘New World Order.'” Its is abundantly clear that those global insiders will create just such a “global financial crisis” to bring into birth the New World Order, which Revelation 13 prophesied will be the short-lived “beast” system before divine intervention destroys the “New World Order” and institutes a biblically prophesied Millennium. It is now “baked in the cake,” dear readers. The globalist insiders want and need a global financial crisis in order to slam-dunk their New World Order on the world. However…. a funny thing is going to happen on the way to a new global government. The entire process will be successfully high-jacked by a rival global group who will destroy the global “Deep State” effort to create a New World Order and replace it with one of their own design. Revelation 17 describes the current secular Deep State as “Babylon the Great,” a global system of insiders in power over the nations for a very long time. The global group that will defeat them and institutes their revised plans for the global government are called “the seven horns and ten heads” (Revelation 17), and this new power bloc will overthrow the Deep State/Babylon the Great. Revelation 17:16 ‘s language indicates this could involve a bloody war. How long will it be until a global financial crisis occurs and this prophesied global power struggle begins? Based on Pope Francis’ call for the current Deep State to now be given global political power, this struggle may begin soon. Revelation 17-18 has prophesied extensively about the “global financial crisis” that will befall the earth in the time ahead of us. You can gain biblical insights into the biblical prophecies about how this will happen in my article, Is Babylon the Great about to Fall…Ushering in a Global Beast System?  Given that huge global traumas are going to hit our global economy and disrupt the global supply chains we all rely on, I suggest you also read my article, Should Christians Prepare for Future Hard Times?

Will Pope Francis be the false prophet? I don’t know. He is virtually volunteering for this ultimately doomed role in his open calls/demands for global government, but I do see one problem. Many “fundamentalists” in many Christian denominations have long expected and taught that the final “false prophet” will be the last pope. Given that there are so many Christians already primed to see a prominent pope as the false prophet, how can Matthew 24:24 be fulfilled if the false prophet is a pope? That prophecy foretells that the final deceptions at the end of this age will be a masterpiece of Satanic deception–so great that even the “very elect” (those closest to God) would be deceived if it were possible. Maybe the Bible is warning us that we should expect the unexpected in how prophecies are fulfilled.

At any rate, Pope Francis is very influential on the world scene, so his strident and imperative calls for global government to be imposed on the world need to be taken seriously. A global pandemic has been unleashed on the earth, and now it may be followed by, a global financial crisis, that will create turmoil or collapse in all financial and monetary markets. But whose system will be imposed on the world after the current system falls? Will it be the New World Order envisioned by the Deep State’s insiders? No. The Bible’s prophecies show an alliance of challengers will overthrow the Deep State’s plans and institute their rival version of a final global system of governance and finance. It will be a chaotic time on the earth as these two global alliances struggle for world power.

We may be on the very brink of major prophetic fulfillment.