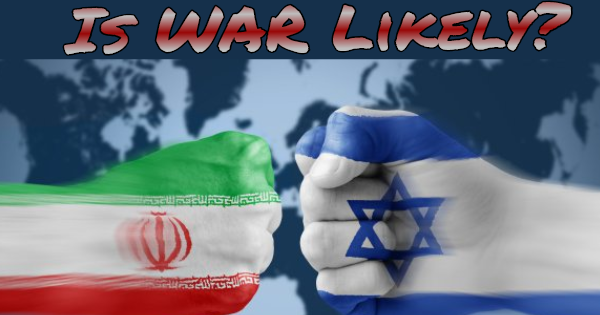 The possibility of a regional war in the Mideast keeps growing more likely. Iran, which has proclaimed it will “wipe Israel off the map,” has been pouring its troops and weaponry into Syria and Lebanon to accomplish that very goal. It appears that the world has not realized the scale of military conflict that has been taking place between Iran and Israel for some time, but it is becoming more evident as of late. Israel recently launched airstrikes into Syria to attack Iranian military personnel and weaponry as well as Hezbollah or Syrian soldiers in their vicinity. It killed approximately 11 Iranians and/or their allies in what is called “the most serious confrontation between Iran and Israel in the last six months” (first link). This link also states that “thousands” of Israeli strikes inside Syria have taken place mostly in secret, but that the Israeli government is becoming more open about these strikes.

The second link offers details from the Israeli media about the strikes conducted by the Israeli military forces. It includes attacks on “at least a dozen” Iranian or Iranian-allied military targets inside Syria. It included air strikes as well as sea-launched cruise missiles, and it reports that the targets hit included storage facilities for advanced Iranian weaponry. Israel has stated that it will not allow Syria to become a staging area for Iranian attacks against Israel, but it is clear that Iran has every intention of continuing to do just that. The third link adds more details about the strike, which also targeted port facilities used by Iranians, and it adds the significant point that Israel conducting this large air strike and naval raid on Iranian targets inside Syria despite Syria having a fully-operational Russian S-300 air defense system which was installed to shoot down Israeli warplanes and missiles. It would appear that the S-300 air defense system was completely ineffective against the Israeli weaponry, a result which Russia should find very disconcerting. If the western-aligned military technology of Israel can defeat the Russian-supplied military technology, it acts as a deterrent against Russian aggression as Russia has to reconsider whether its technology really is a match for western military systems (it seems logical, for example, that Israel’s abilities to defeat this Russian air defense system are being shared with the USA–Israel’s main ally).

Israel is now becoming more open about the scale of warfare that is being waged against the Iranians inside Syria (fourth link), and one does wonder how long Israel can wait before launching a major preemptive strike against Iranian assets across the Mideast to prevent Iran from unleashing its forces in Lebanon and Syria against Israel in a major attack designed to “wipe Israel off the map.” The growing tensions across the Israeli border with Hezbollah-controlled Lebanon and Iranian-aligned Syria are personal to me as I stood at the Israeli-Lebanese militarized border in August 2000. The part of the border which I saw was a tall double-row of heavy fencing with watchtower lights between the fence lines in what I assumed to be a mined “kill zone.” I also recall looking up at the Golan Heights from a kibbutz in the far north of Israel and marveling at the strategic advantage over northern Israel that is offered by control of the Golan Heights. Israel dare not give up control of that strategic position, especially since Iran is trying to put forces into position in that region with which to attack Israel.

There is another reason why Israel (and perhaps the USA as well) cannot indefinitely put off a preemptive strike vs. Iranian assets throughout the Mideast. In the aftermath of the break-up of the infamous nuclear deal done by the Obama administration that gave an immense amount of cash and concessions to Iran, Iran is now casting off the facade of being committed to any nuclear limitation pact. Iran has announced it will break the pact by enriching uranium to a higher-grade which could include nuclear weapons (fifth link). Iran even hinted that it could attain a plutonium-production program, which would surely mean a nuclear warhead program. The acceleration of the nuclear program inside Iran clearly creates a greater level of threat to Israel’s existence and increases the possibility of a preemptive strike vs. Iran. In attacking oil tankers in the region and shooting down a large US military drone, Iran seems to be spoiling for a fight.

A comprehensive preemptive strike vs. Iran would not be easy.  The sixth link details some of the obstacles in an attempt to hit deeply-buried Iranian nuclear facilities. The link observes that it may be more effective to destroy the entrances to the underground facilities and also to destroy their above-ground ventilation systems to render the buried facilities useless. However, the sixth link did not include in its analysis just how dangerous a Mideast War could become. Hezbollah is reported to have over 100,000 missiles and rockets aimed at Israel from launchers in southern Lebanon. If Iran gave Hezbollah the green light to launch those projectiles, an unknown number would penetrate Israeli defenses no matter how good the Iron Dome system is. If the damage is unacceptable, Israel will destroy southern Lebanon to eradicate all Hezbollah assets.

In a truly worst-case scenario, Israel may have to save itself by laying down a barrage of tactical nuclear weapons across Hezbollah-controlled territory to eradicate the forces that are intended to devastate all of Israel. Israel is a very small nation with no hinterland to which it can retreat. In the event of an all-out attack against Israel, it must make major decisions very quickly. I’m sure Israel will try to win any such war via conventional means, but if the choice becomes (A) use nuclear weapons and save Israel or (B) don’t use nuclear weapons and lose Israel, I’m sure the Israelis would select the former option. The credo “never again” means exactly what it says. Israel also possesses sophisticated German-made submarines with missile-firing capacities. It has been speculated that these subs could fire either nuclear-armed or conventionally-armed projectiles. In any war, these subs could fire their missiles at Iranian targets from launch positions in either the Mediterranean Sea or the Gulf of Oman.

Iran is a radical nation which has declared that its intention is to annihilate a nuclear-armed nation (Israel is widely assumed to have nukes) which is utterly determined to survive. In threatening to attempt a new Holocaust against the Jewish nation, it is Iran which is truly “playing with fire.”

My articles about what biblical prophecies reveal about latter-day events include a detailed discussion of the alliances, battles, and outcome of a prophesied World War III, and these can be reviewed by reading my free articles, Are We Living in the Biblical Latter Days?, What Ezekiel 38-39 Reveal about a Future World War III, The United States of America in Biblical Prophecy, and Japan’s Role in Biblical Prophecy.  While the Bible gives considerable details about the age-ending battles of World War III in Ezekiel 38-39 and other prophecies, it by no means precludes the possibility of regional wars between the major power blocs of the latter days occurring before the final climactic war occurs. Regional wars could occur not only in the Mideast but in the South China Sea, the Korean Peninsula or even the Ukraine region. The Bible is silent about such possibilities so we will have to watch world events to see if they do occur. If Iran does provoke Israel (and perhaps the USA and Sunni nations) into a major war in the Mideast, I expect that Iran will be bloodied. This would embitter Iran into becoming even more closely aligned with Russia and China in the modern alliance prophesied in Ezekiel 38-39 to exist in the latter days as the Gog-Magog bloc. Such an outcome would help set the stage for the eventual fulfillment of the latter-day prophecy in Ezekiel 38-39.