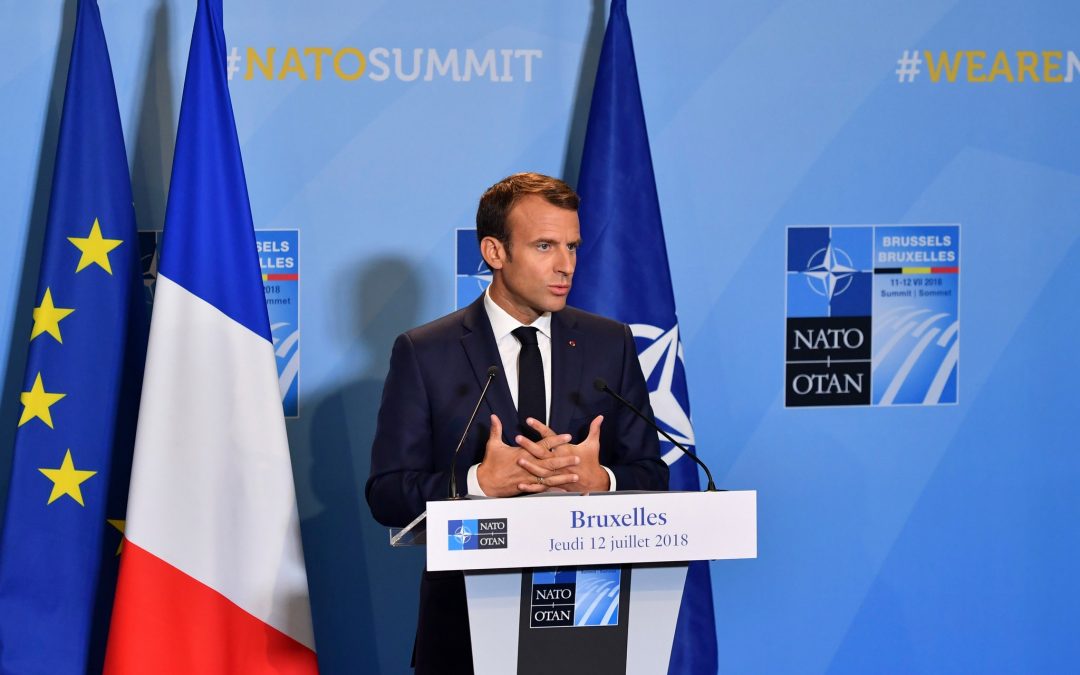 French President Emmanuel Macron shocked his fellow European nations by declaring that NATO is suffering from “brain death.” As the first link makes clear, Macron meant his statement to be an attack against US President Donald Trump’s role in the alliance; however, he was met by quick criticism from German Chancellor Angela Merkel and NATO Secretary-General Jens Stoltenberg. Merkel “responded unusually sharply” to Macron’s “drastic words.”

Macron and Merkel have previously formed a Franco-German partnership in trying to create an EU military force that would be outside of NATO. Macron was likely trying to push that agenda forward with his harsh words about NATO. Macron is cited in the first link as wanting future increased European military spending to be “in pursuit of their own strategic goals, in collaboration with NATO, but not beholden to it (emphasis added).” In other words, Macron is in favor of increased military spending by Europe’s nations, but he wants it to build a European military force that would not be subject to the NATO command structure. Macron seems to be bad-mouthing NATO in order to induce Europe’s nations to redirect their priorities to build an EU military force instead of increasing their military commitment to NATO. If so, Macron received no support. Even German Chancellor Merkel stood side-by-side with NATO’s leader Stoltenberg to contradict Macron’s statement.

The second link has a video from the German media about this controversy, and it also cites US Secretary Mike Pompeo as being solidly pro-NATO in support of the Merkel-Stoltenberg joint appearance opposing Macron. Pompeo was in Europe to help celebrate the 30th anniversary of the fall of the Berlin Wall (third link) which eventually led to the Soviet Union’s captive Warsaw Pact nations throughout Eastern Europe switching sides and joining NATO. This was really a watershed event in modern history.

If Macron was trying to move European nations to back France instead of the USA in leading the western democracies against Russian threats, his effort appears to have been counter-productive. Previous posts have documented that the Eastern European nations look to the USA to station American soldiers and defensive weapons systems (such as the Aegis Ashore air defense systems in Romania and Poland or armored forces) in their nations to deter Russian aggression. Indeed, Macron may only have succeeded in reinforcing the desire of Eastern European nations to look to the USA for security protection instead of any EU entity. The fourth link discusses the especially strong linkage that has developed between the USA and Poland in military security cooperation, as well as noting that Poland has little faith in the EU to militarily protect it from a Russian attack. It also discusses steps Poland is taking to build up its own military forces. President Trump actually did NATO a favor when he publicly warned that very few NATO nations in Europe were meeting their obligations to spend 2% 0f their GNP on military defense. NATO was atrophying, and Trump warned about the dangers of a weakened NATO due to insufficient military spending by most NATO member nations. Since Trump’s warning drew attention to the matter, many European nations have been increasing their military spending to strengthen NATO.

Clearly, there has been a breach between France’s Macron and Germany’s Merkel about how to defend Europe in the future. Macron appears to want to weaken NATO and make himself the leader of a new EU military alliance outside of NATO. Macron criticized the USA for taking an action in Northern Syria without consulting France and other NATO allies, but Macron apparently made his shocking declaration without any prior consultation with Merkel or other European leaders. There are clearly problems within NATO. The biggest one I see is Turkey’s sliding into an alliance with Russia by Turkey’s purchase of a Russian air defense system and considering Russian warplanes for the Turkish air force. Turkey also attacked the Kurdish-inhabited northern portion of Syria despite clear opposition from the USA, Germany, France and other NATO allies. As I write this, Turkey’s President Erdogan is in Washington, DC for meetings with President Trump at a time when the relationship between the USA and Turkey is tense, to say the least. Even as Turkey is taking actions to distance itself from NATO under Erdogan’s leadership, the Ukraine is taking actions to draw closer to NATO and perhaps even join it.

While the globalist camp would like to have the EU become a superstate governing all of Europe, that increasingly seems less likely to happen. The EU is deeply flawed in its internal structure: it is not a national government, it has no military forces and its leaders are not publicly elected by the European people. EU leaders are selected by an oligarchy of globalist insiders. This guarantees the globalists will head the EU, but it also robs the EU of the credibility that would result if its leaders were publicly elected by the European citizenry. Recently, the EU selected new leaders, and when the globalists deadlocked on who to appoint as the new EU leader, the insiders chose a compromise candidate: Germany’s Defense Minister Ursela von der Leyen. I find this choice to be very interesting as it it argues that the EU will not have any strong fighting force of its own very soon. Under von der Leyen’s leadership, the German military forces fell into a state of extreme disrepair. The fifth link details how the German military deteriorated when von der Leyen was the German Defense Minister responsible for the readiness of the German military forces. Now that she has been “kicked upstairs” to lead the EU, her demonstrated lack of ability to lead the German military bodes ill for any military force the EU may try to put together.

Macron’s bizarre pronouncement aside, it is still clear that the European nations face problems which could lead to sudden changes that would realign the European nations into new military/political or economic/monetary blocs. My previous post discussed the serious possibility that Germany’s largest bank, Deutsche Bank, is on the verge of collapse. If it does go under, the EU itself and the Euro currency will be in jeopardy of falling along with it. NATO still has many military resources, but it is losing some internal cohesion and political leadership. The German government is barely holding on with an uneasy alliance of parties that could come apart at any time. The United Kingdom is still paralyzed by Brexit uncertainties, but hopefully new British elections in December will finally resolve that issue. Italy just had a government shake-up which resulted in the most popular party being out of power, so Italy’s latest governing coalition may not last long. The USA is deeply-divided in its internal politics. Turkey has the second-largest military in NATO, but its actions have caused it to be an unpredictable unreliable NATO member at present. If Deutsche Bank falls, it may lead to internal schisms within Europe that may further affect NATO’s unity.

Many NATO members are acting as if they will never have to actually militarily defend themselves against a Russian invasion. Biblical prophecies warn us that a Russian attack against the NATO nations is going to happen at some future point, but it does not give us any dates. When modern nations are identifiable by their ancient names in biblical prophecies, the future becomes starkly clear. My books present a solid body of evidence identifying many modern nations by their biblical terminologies, and I recommend readers obtain copies to see the persuasive evidence they contain. There are four printed books, which can be obtained singly or as a set, and there is a downloadable E-book for $12.99 that contains much of the greater body of evidence that is contained in the four book set. To see abundant evidence that we are living in a critically-important prophetic time, please read my free article, Are We Living in the Biblical Latter Days? To see what biblical prophecy reveals about a future global conflict that will occur in a future year, please read my free article, What Ezekiel 38-39 Reveals about a Future World War III. To see a synopsis of the evidence that identifies the USA in biblical prophecies, please read my free article, The USA in Biblical Prophecy.