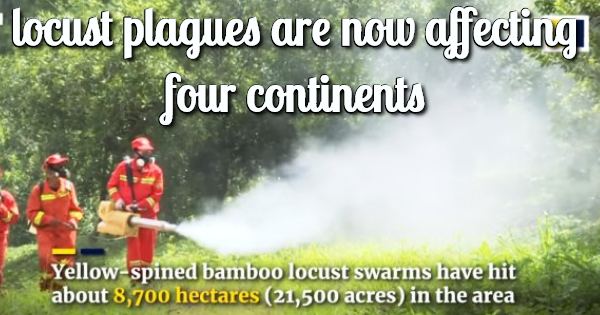 As readers know, my blog has periodically featured updates about the spreading locust swarms that are threatening the food supplies of steadily-more nations this year. The global locust plague has now gotten much worse. At the time of my previous post on this topic, the locust swarms were infesting two continents; Africa and Asia. At least nine African nations were being harmed by these locust plagues, and the locust swarms had spread into Iran, Afghanistan, Pakistan, and India in Asia. The locust plagues are now affecting four continents, and they show no sign of letting up in their march to infest more nations.

The first link mentions that destructive locust swarms are now affecting three continents: Africa, Asia, and South America. Argentina was named as a nation hit by the locust swarms and Paraguay, Uruguay, and Brazil were listed as being threatened by them. The second link also reports the locust swarms have spread deeper into Asia. It relates that locust swarms are now affecting the southernmost provinces of China and that China thinks they entered their nation from Laos. The second link also shows that the Chinese are trying to stop the locusts from spreading deeper into China by using large pesticide-spraying drones. I think this is a very ingenious idea, and other nations should adopt the same strategy. Spraying pesticides into the middle of migrating swarms via aerial drones should kill many of them in mid-flight. However, while this technique will limit the spreading locusts, it is unlikely to stop them. There are simply too many of them. the third link shows how numerous the locusts have become in southern China, and it also offers a useful map of the part of China now invaded by the locust swarms.

With damaging locust swarms in Pakistan, India, and China, it is an obvious major threat to those nations’ food supplies. If the locusts did spread into China from Laos, it also means the locusts will almost surely spread throughout Southeast Asia as well. This entire region of Asia is the most heavily-populated region of the planet. If this region loses vital crops due to locust plagues, there will be severe consequences for all the nations in the region.

The problem is also getting worse in South America. The sixth link and seventh link detail the spread of two major locust swarms from Paraguay into Argentina, and that Brazil’s winter crops are now being threatened by locust swarms that are approaching the Brazilian border. It is also evident from the photos in the links in this post that there is more than one type of locust generating these global swarms. Several links comment that the prevailing weather conditions are now conducive to allowing locust swarms to become very huge and to spread large distances. With months remaining in the Northern Hemisphere’s summer season, the locust swarms could regenerate and spread to many more nations yet.

I’ve included the eighth link which has a good description of the life cycle of locusts and why they are swarming in such huge quantities this year. The link mentions that a single swarm can have tens of billions of locusts in it, and that just one swarm in Kenya was so huge it was 24 times the geographic size of the city of Paris! It also added that some swarms are so dense that they can contain 40-80,000,000 locusts in just a half of a square mile of land. You can imagine the damage to food supplies that can be done by such huge swarms of voracious locusts. The potential for a global famine is steadily getting more likely as more nations are hit by these migrating swarms of locusts. Famines will make the geopolitics of affected regions change dramatically. Nations will need to obtain food supplies from other nations. Food prices will rise as shortages grow more widespread. It can also affect global geopolitics. For example, readers are surely aware of the worsening relations between China and the USA. China may desire to retaliate vs. the USA for some action by canceling its trade agreement with the USA to import more foodstuffs from the USA. However, if locusts swarm start devouring croplands in Southeast China, China may have no choice but to import foodstuffs from the USA just to able to feed its massive population.

The same biblically-based commentary I offered in previous posts about the spreading locust plagues still applies…only more so. No nation has figured out how to stop these immense locust swarms from spreading to ever-more nations. The more crops these locusts consume, the worse the resultant food shortages will become. Hunger and famines now appear to be imminent. Mathew 24:1-8 includes the prophecy that “famines” and “pestilences” will characterize the final years of our age before the Millennium/Messianic Age is imposed on the earth by divine intervention. The global coronavirus pandemic and the increasingly-global locust plagues are fulfilling Matthew 24’s prophecy about “pestilences.” Revelation 6:1-8 also foretells that food shortages will occur in the latter days and that food supplies will be rationed by price. This outcome will have a huge impact on global commodity and financial markets.
If any reader has any doubts about whether we are living in the biblical latter days, please read my article, Are We Living in the Biblical Latter Days? Given that we are entering a time when food shortages are prophesied to occur, I also urge readers to review the points given in my article, Should Christians Prepare for Future Hard Times? I believe this article offers appropriate, biblically-based advice on how to prepare for such a time. Obviously, the advice in this article would be useful for anyone, not just Christians.