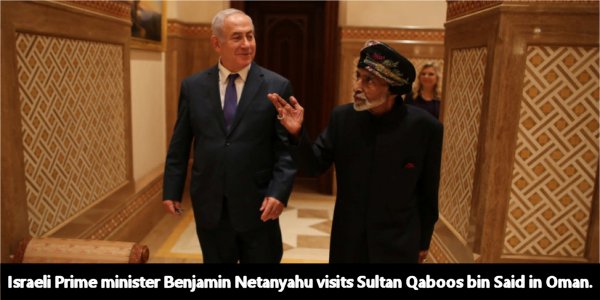 There has been more remarkable progress made in the growing alliance between Israel and the Sunni Arab nations. Recent developments would have been impossible to even imagine not that many years ago. Israeli Prime Minister Netanyahu recently visited the Sultan of Oman at the invitation of its Sultan. Writing about this visit, the first link states: “Oman publicly called on Middle East nations to accept Israel.” The link also added that the nation of Bahrain supported the Omani action. The second link details a report about a very secretive visit by an unspecified dignitary in an airplane that flew from Israel to Pakistan via an interim landing in Jordan. There is speculation that it was Israeli Prime Minister Netanyahu on the airplane, but that is unconfirmed. The common thread in all such reports is that an anti-Iranian alliance is being forged in the region which is uniting many Sunni Islamic nations with the Israelis. One wonders how many secret visits and consultations are occurring behind the scenes that are midwifing this alliance into existence.

A very eye-opening statement by a senior official in an Arab nation is described in the third link. Foreign Minister bin Abdullah of Oman reportedly stated that “The Torah and the Israelite prophets emerged from the Middle East.” Did you ever think years ago that you would be alive to see a senior cabinet official in a Sunni nation mention the Torah and the Israelite prophets [of the Bible]? This utterance shows how far Israeli-Sunni amity has come in recent years. It is clear that the Sunnis and the Israelis both see themselves as parties which are mutually threatened by Iran’s growing power and its nuclear program. In geopolitical terms, the Sunni nations and the Israelis very much need each other to successfully counter Iran. The truth of the maxim “the enemy of my enemy is my friend” is very evident in the warming relations between the Israelis and Sunni nations.

There is more. An Israeli judo team competed at an international judo competition (fourth link) in Abu Dhabi, the chief city of the United Arab Emirates. Significantly, when an Israeli competitor won a gold medal in his weight class, the Israeli national anthem was played during the medals presentation (fifth link). That the Israeli national anthem can now be played openly even in a Sunni nation that lacks formal diplomatic relations with Israel is a profound piece of evidence regarding how close the Sunni nations and Israel are to an open alliance for mutual support and protection vs. Iran and its many proxies. Iran threatens many Sunni governments as well as Israel via the Syrians, Hezbollah, the Houthis in Yemen, etc. With Russia now present in force within Syria, the Sunni nations need to ally themselves with strong partners vs. Iran. The US government, under President Trump, has been favorable toward the growing Israeli-Sunni cooperation. It is possible that in the not too distant future, a formal new alliance will be announced that will surprise the world–a kind of Mideast NATO-like alliance. Some of this post’s links state that the Sultan of Oman is now the lead negotiator in an effort to achieve a Palestinian-Israeli deal that takes that issue “off the table.” The Palestinians, who tilted toward Shiite Iran to their own great detriment, may be required to agree to a deal which is far less to their liking than the deals they rejected in the past. The threat of Iran and its allies poses an existential issue for the Sunni Arab nations. They need strong allies to survive against the growing threats from Iran far more than they need to hold out for the Palestinians’ fantasies of what they think they can obtain in any negotiated deal. Having an ally with Israel’s power is far more important to the Sunni governments than backing the Palestinians’ unrealistic demands vs. Israelis.

The sixth link offers a good analysis of the current Mideast trends, and it notes that Iraq is now “aligned with Tehran.” Iraq is a majority Shiite nation and its religion makes it a logical ally to Iran. There are Sunni majority regions within Iraq (Western Sunni tribal areas and the Kurdish Autonomous Zone in the north), but the Iraqi central government is now in Iran’s orbit. As an American, it pains me to write it, but the fact must be faced that even though the USA won two Mideast wars in Iraq, it has decisively “lost the peace” in the Iraq that is now emerging. Both Presidents Bush and Obama are clearly to blame for this outcome, and I do not think it likely that this outcome will be reversed. Why? A prophecy in Revelation 16 about the great apocalyptic world war at the end of this age (i.e. “Armageddon” in verses 14-16) foretells that a great invasion force will launch an attack toward the West from a starting point at the Euphrates River (verse 12). This great war ends the latter days of our age as does the great world war prophesied in Ezekiel 38-39 so these are parallel prophecies. Any attacking force launched westward from the Euphrates Region will be heading toward Israel and Sunni nations. That force will include hosts of Iranians and Shiites. Iran has openly declared its intention to “wipe Israel off the map.” Revelation 16’s prophecy reveals Iran and its allies will attempt to do so, but that attempt will fail.

The sixth link also makes an interesting observation concerning the steadily warming Israeli-Sunni Arab relationship that “the Semitic tribes are slowly inching together.” This is a reference to the fact that the Jews are Semites due to their being descended from Shem via Abraham, Isaac, and Jacob. The Arabs have a strong tradition that they are descended from Shem via Abraham’s son, Ishmael. I agree with their tradition for reasons outlined in my books. This observation reveals that there is more than fear of Iran that may be pulling the Arabs and Israeli Jews together. The Israelis and Arabs are both descended from the patriarch, Abraham. There is a blood tie uniting them that this world has largely overlooked.

As long-time readers of this blog know, I have for years been expecting and watching the developments that have been pulling the Israelis and Arabs together against Iran. My reason for this expectation was the wording of the prophecy in Ezekiel 38. Ezekiel 38 lists the member nations of the Gog-Magog alliance that will attack a rival alliance led by the many tribes of Israel in the latter days. There were originally twelve tribes of Israel that became thirteen tribes when the tribe of Joseph was subdivided into the “birthright” tribes of Ephraim and Manasseh. The Jews/Israelis are just one of the many modern nations descended from the ancient ten tribes of Israel. The more numerous other tribes can be found among the modern nations, and my books, audio messages, and articles reveal where they are in the western world. The Gog-Magog nations are listed in Ezekiel 38:2-6, and decades ago I noticed that “Egypt” and “Ishmael” were not listed as being in the Gog-Magog alliance. This argued that Egypt and the Arab nations (the Ishmaelites) were destined to be in the alliance headed by the modern tribes of Israel (many of which are in the NATO alliance). Since Egypt and the Arab nations are both in the Sunni Islamic camp, and since “Persia” (modern Shiite Iran) is listed as being in the Gog-Magog alliance with Russia, China, etc., it made logical sense that the rival Sunni and Shiite camps within Islam would be in rival alliances in the end times. Based on this prophecy, I began anticipating the warming Israeli-Sunni relationship years ago in my blog, as long-time readers realize. This conclusion shows you can rely on Biblical prophecy to reveal how modern geopolitical events will transpire in our modern world’s future.

Expect more developments pulling the Israelis and Sunnis together as events unfold. For more in-depth biblical information on the above topics, please read my free articles, Are We Living in the Biblical Latter Days?, What Ezekiel 38-39 Reveal about a Future World War III and The USA in Biblical Prophecy. If you read these articles as well as my books and listen to the free audio messages, you will see that whether people like or do not like the Bible, its prophecies are coming to pass in our modern world with amazing accuracy.