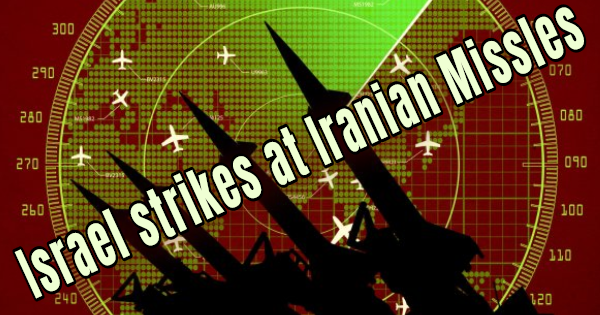 The possibility of a major regional war in the Mideast keeps rising. Indeed, recent developments indicate it is now at the point where it may only be a “hair trigger” event from happening.

Previous posts at this website have documented many links that Israeli forces have targeted Iranian forces and Iranian militarily weaponry inside Syria for perhaps as long as two years. Some previous posts have cited links which report that Israel has conducted many more strikes against Iranian targets inside Syria than have been reported. Israel has repeatedly stated that it will never allow Iran to have nuclear weapons and that it will not allow Iran to create a military situation where it can accomplish its stated goal of “wiping Israel off the map.” Iran’s efforts to create a massive arsenal of rockets and missiles inside Hezbollah territory in Southern Lebanon and its further efforts to deploy Iranian military forces to Syria is clearly an effort to set the stage for a lethal first strike vs. Israel. The first link contains a report that Iran is helping Hezbollah upgrade the guidance systems of large numbers of its “dumb” rockets with guidance systems that turn then into precision-guided munitions. Iran and Hezbollah are clearly preparing for a first-strike vs. Israel.

The stakes have gone up again in the region. Iran is now also furnishing missiles to Iranian-aligned militias inside Iraq so they can also fire missiles at Israel to help “wipe it off the map.” Presumably, these are Shiite militia inside Iraq. These new Iraqi-based missiles can “hit anywhere in Israel” (second link), and this seriously escalates the threat to Israel posed by Iranian forces that are trying to create a first-strike capability vs. Israel. Israel has begun to strike against the Iranian forces and weaponry inside Iraq with warplanes and armed drones (second link and third link). The second link also has a report that American special forces have conducted clandestine missions vs. Iranian forces inside Iraq. One Iranian military commander was reportedly killed in a strike inside Iraq (fourth link). Any American clandestine efforts to hinder Iranian weapons deployments may be intended to help prevent a large war from erupting in the Mideast.

Iran has also tested ballistic missiles which could reach anywhere inside Israel. Israel is now living with a situation where a simultaneous barrage of missiles and rockets could come at any time from Iran, Iraq, Syria, Hezbollah territory in Lebanon and from Hamas forces inside Gaza. Israel has no hinterland to absorb such a first strike from Iran so the chances of an Israeli preemptive strike are rising as well with each new threatening action from Iran. Now that Israel has begun to strike Iranian targets in Iraq as well as in Syria, the war that is simmering between Israel and Iran has just gotten “hotter.”  While we can hope a major war will be prevented, I think the chances of a major war erupting in the Middle East are now greater than the chances are of averting one.

It does seem that Iran is trying to deliberately provoke a large war in the Mideast. It is the prime suspect in attacks on several oil tankers in the Persian Gulf region, it almost sunk one oil tanker and left it burning and it has also hijacked a British oil tanker and it is now holding it captive at an Iranian port. It also shot down an American surveillance drone and released footage of its commandos attacking the oil tanker that they hijacked. If a large war breaks out, Iran will fire huge salvos of missiles at Israeli and American targets in the region. It may be that President Trump is aware of such an Iranian intention and that is why he decided not to launch a military strike vs. Iran when he canceled it reportedly ten minutes before it was to begin. If Trump had wanted a war, he has had ample provocation from Iran to launch one. That he has not done so speaks volumes. One reason for a delay may have been just revealed. Israel and the USA successfully tested a new Arrow-3 hypersonic, anti-missile system that is designed to shoot down enemy ballistic missiles (fifth link). While the fifth link mentions the Arrow-3 interceptors could be used to shoot down ballistic missiles fired at Israel from locations in Syria or Iran, that test also sends a powerful message to North Korea, China and Russia.  It shows the Arrow-3 can also shoot down ballistic missiles fired from North Korea and that it can shoot down ballistic missiles fired by either China or Russia. It is simply a matter of time until Arrow-3 systems are placed wherever the USA wants to install them. A recent post described China’s proclamations about its new “carrier-killer” ballistic missiles. I think the Arrow-3 system could be based in Guam, Japan, South Korea and anywhere else among the nations surrounding the South China Sea that oppose China’s bellicose efforts to seize control of that important maritime body. A ring of Arrow-3 bases surroundings China should effectively serve as a major deterrent to war in that region. It also could serve to make war in the South China Sea more likely in the short term as China, if it wants a war, would need to launch it before the American Arrow-3s were deployed at bases in locations threatened by Chinese ballistic missiles. For carrier defense, I wonder if there is a naval variant of the Arrow-3 that could be installed on American naval vessels?

You can be sure that Russia and China witnessed the successful demonstration of the Arrow-3’s ability to intercept and destroy ballistic missiles. This means Russia and China now realize that their own ballistic missiles may not be effective if launched at American or allied targets protected by the Arrow-3 missiles. There is another deterrent component to the Arrow-3 test in Alaska. The Arrow-3 is reported to be a hypersonic missile. There have been many reports for years that during the ineffectual Obama administration the USA had fallen behind Russia and China in the race to develop and deploy usable hypersonic missiles. President Trump’s administration has been working hard, according to many reports, to regain American military superiority in many weapons categories to establish a realistic deterrent force to any potential aggressor. Now that the USA and Israel have deployed a hypersonic defensive missile, it means that hypersonic offensive missiles cannot be far from deployment as well by American and Israeli forces.

Readers who wish to examine the current Mideast situation in light of biblical prophecies can do so, in much greater depth, by examining my free articles, Four Reasons the Jews are Judah and What Ezekiel 38-39 Reveals about a Future World War III.