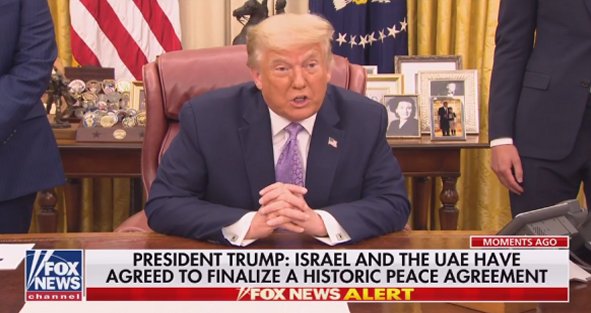 A truly historic and important step was just taken in the Mideast. The nations of Israel and the United Arab Emirates (UAE) signed an agreement to establish full diplomatic relations with each other. It clearly has come into being with the active intermediary actions of the Trump administration in the USA. All three nations announced the agreement, which brings out into the open the growing cooperation between Israel and the Sunni Arab nations, all of which are threatened by Iran. The first  link, second link, third link and fourth link offer diverse perspectives on the deal. These four perspectives (from the American media, a Christian website, a prominent Islamic news network and an Israeli media source) will give the reader a comprehensive viewpoint on how this deal is being reported and perceived throughout the Mideast and the world. Some links include details on the various complexities that are extant in the greater Mideast. The fifth link reports that the government of France quickly welcomed the deal.

As you will see, the deal is very far-reaching and allows for full diplomatic activities and relationships across the entire breadth of the two nations’ governmental departments and their civic affairs. It also includes a commitment by the Israeli government to delay any annexation of more territory in the West Bank now claimed by the Palestinians. Indeed, having full diplomatic recognition with a major number of the Arab Sunni nations is far more important to Israel’s security needs than asserting sovereignty over patches of the West Bank region. The UAE is very close to the Saudis, and would surely have consulted with them during the negotiation process. If the Saudis also establish diplomatic relations with Israel, a number of other Sunni Arab nations will surely do so as well. It has been suggested that Bahrain will be the next Arab nation to establish full diplomatic relations with Israel (sixth link). Wherever the Israeli embassy is placed in the UAE, it will mean that the Israeli flag that openly flies over it will likely do so within sight of the Persian Gulf. Similarly, the flag of the UAE may fly over its Israeli embassy within sight of the Mediterranean Sea. Who would have guessed just a few years ago that such things would have been possible?

Obviously, what is pushing the Israelis and Sunni Arab nations together is the growing threat posed by Shiite Iran to both the Israelis and the Sunnis. With Iran continuing to build up its nuclear program, threatening the existence of Israel and its continuing effort to destabilize the Sunni nations via its support of Hezbollah, Hamas, the Houthis, etc., Iran’s policies will continue to force Israel and the Sunni Arab nations together. Indeed, I will not be surprised if the UAE-Israeli pact leads to more formal diplomatic relationships between Israel and other Sunni governments. Such an action might create the momentum to the formation of a kind of Mideast NATO-like alliance wherein the Sunni nations and Israel agree to an open and formal alliance.

If this deal had been negotiated under a Democratic president, the US media would be hailing it with gusto! Since this diplomatic triumph has been accomplished by the Republican President Trump, the American media’s reaction to this historic deal will be very muted and underwhelming–especially in an election year. Nevertheless, the rest of the world will see it for what it is–a formal sign of the growing cooperation between Israel and the Sunni nations and visible evidence of the clout of the Trump administration in Mideast negotiations. It wasn’t that long ago that the Trump administration was hoping to midwife a “deal of the century” between the Israelis and Palestinians. It is my view that facilitating diplomatic relations between Israel and the UAE (and other Sunni Arab nations) will have far more impact in the Mideast and the world that any deal between Israel and the Palestinians could ever do. The normalization of relations between Israel and Sunni Arab nations should prove to be very welcome news in European and western-aligned nations. It will mean that, increasingly, other nations will no longer have to “take one side or the other” in political, military, and diplomatic matters. I expect that each Sunni nation that establishes full diplomatic relations with Israel will receive Israeli expertise in upgrading its military forces to better withstand threats from the Iranian military.

This Israeli-UAE pact also acts to help fulfill the prophecy of Ezekiel 38 which foretold the end-time alliances that would face each other in a final global war at the end of our age. Ezekiel 38:1-6 lists the nations that will form the Gog-Magog alliance that will launch a secret attack vs the Western and Western-aligned nations when the time comes for this prophecy to be fulfilled. It is obvious that this prophecy is for our modern time as it declares in Ezekiel 38:16 that it will be fulfilled in the “latter days.” Abundant evidence that we are now living in this key prophetic time can be found in my article, Are We Living in the Biblical Latter Days? Iran is identified in Ezekiel 38:5 by its ancient name, “Persia,” and Russia, China and the other nations in the Gog-Magog alliance are identified by their ancient names as well.  A full analysis of what Ezekiel 38-39 prophesy about these alliances and a coming climactic World War III can be found in my comprehensive article, What Ezekiel 38-39 Reveal about a Future World War III.

I’d like to close this post with an observation about Ezekiel 38’s prophecy of end-time alliances that is easily overlooked. When one goes through the entire list of nations that will be in the Gog-Magog alliance, one important fact becomes clear. Not one of the nations descended from the patriarch, Abraham, is listed as being in the Gog-Magog alliance. This strongly infers that all the modern nations descended from Abraham will be in the rival alliance that is attacked by the Gog-Magog alliance. Let’s briefly consider the Abrahamic nations. Genesis 17:4 promised that Abraham would be the father of many nations. Abraham’s modern descendants include far more than the Jews, who constitute the tribe of Judah in the modern world. The rest of the tribes of Israel are identified in my books on their history, and many clues about their destinies in our “latter-day” period of time are found in Genesis 48-49 (described in detail in my books and see also my article, The USA in Biblical Prophecy). The rest of the tribes of Israel are found in Northern, Central and Western Europe, North America, Australia and New Zealand (this includes many NATO nations and the “Five Eyes” alliance). These are the nations of “Israel” that Ezekiel 38-39 foretells will be attacked by the Gog-Magog nations, and they descend from Abraham through Abraham’s wife, Sarah. Abraham fathered many other nations as well. The Arab nations are descended from Abraham via Ishmael, who was born to Abraham and Hagar. The Turks (Edom/Esau) were fathered by Abraham via Isaac’s wife, Rebekah. Many Eastern and Balkan European nations were fathered by Abraham via his wife, Keturah. Abraham also had a harem of concubines which he sent away to a land “east” of the Promised Land (Genesis 25:6). It is my belief that the sons of Abraham’s concubines settled in India and originated some of the castes of ancient India. Indeed, the historic ruling class, the Brahmans, bear Abraham’s name still today. Ancient languages often omitted or dropped vowels in written words, and when you add an “A” to the beginning of “Brahman,” you have “Abrahman,” a clear form of the name, Abraham. The fact that none of these ancient names of Abraham’s modern offspring appear in Ezekiel 38:2-6 argues strongly that no nation descended from Abraham will be in the Gog-Magog alliance at the end of our age. The creation of full formal ties between the Israelis and the Sunni Arabs of the UAE actually brings closer together two of the modern nations descended from Abraham. The identities of modern nations by their ancient biblical names is examined in detail in my books, audio messages and articles, all of which are available at my website.