IS AN AMERICAN-IRANIAN WAR IMMINENT? 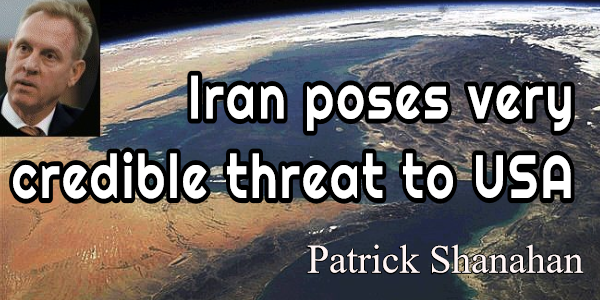 What began as an outbreak of hostilities between Hamas and Israel has quickly escalated into a larger and direct confrontation between the USA and Iran. What has happened behind the scenes that have caused this confrontation to grow into a possible war situation so quickly? The USA has been tight-lipped about specific details that have triggered this crisis, but I think that there is a possible answer that is not being discussed in any media articles.

First, let’s recapitulate what happened between Israel and Hamas. Hamas triggered the crisis, as usual, by firing more than 600 rockets at Israeli towns, cities and other targets inside Israel. Israel responded with approximately 260 air strikes vs Hamas targets inside Gaza. In this worse instance of violence in several years, four Israelis were killed and at least 16 Palestinians as well. Others were wounded on both sides (first link). The first link also reported that Israel’s Iron Dome air defense system intercepted approximately 150 of the rockets fired into Israel, which means about 1/4th of the Hamas rockets were intercepted by the Iron Dome system. This means the vast majority of Hamas rockets did not have an Iron Dome interceptor launched at them. Why not? It is my understanding that the Iron Dome system makes a very fast calculation of whether a rocket’s trajectory and speed will cause it to be a danger to Israeli lives or structures. If the system determines that it will fall harmlessly onto the desert or mere dirt, no iron Dome projectile is fired at it in order to “save ammunition.” Obviously, some Hamas rockets did get through the defensive system. The second link offers additional details about this exchange of fire. The third link gives us an inkling into how this Hamas attack drew in the USA  to confront Iran. It reports that a senior Hamas official who acts as the money man directing Iranian funds to Hamas was killed by an IDF strike. Iran’s role in Hamas and Gaza has been well-known for some time, but his being killed in a strike means Israel wants to sever Iran’s support for Hamas. In spite of Israel’s response to the Hamas rocket attack, some Israelis feel the response was too small. The mayor of Ashkelon called for Prime Minister Netanyahu to “let the IDF loose” to inflict really severe and painful damage to Hamas in order to compel Hamas to stop the rocket attacks (fourth link).

Very quickly, this Mideast crisis escalated into an American-Iranian confrontation. The fifth link states that the USA is sending an aircraft carrier battle group and a group of B-52 strategic bombers to the Mideast as US National Security Advisor John Bolton warned about “a number of troubling and escalatory indications and warnings.” The USA has recently tightened global oil sanctions vs. Iran so that no nation doing business with the USA is allowed to import Iranian oil. The USA has stated it wants Iran to become a “normal nation” instead of a sponsor of terrorism. These sanctions will put much pressure on the Iranian economy and Iran has periodically threatened to close the Strait of Hormuz between the Persian Gulf and the Indian Ocean to force the world to accept Iran’s agenda. The US has said it will not accept any such action as it would cripple the oil export businesses of American’s Persian Gulf allies. Iran has also threatened to back out of a nuclear treaty which resulted in President Obama giving Iran many billions in cash in exchange for some fuzzy assurances from Iran to delay its nuclear weapons program. The current situation has deteriorated rapidly. US Secretary Pompeo canceled an important meeting in Germany to visit the leaders of Iraq about the Iranian crisis. An Asian media source grimly observed there was “little doubt now that Iran and the USA are inching toward full-scale war…conflict now seems inevitable” (sixth link). It was also reported that Iran is shipping armed drones to Syria and that Iran is in the process of taking over the control of Syria’s seaport at Latakia. This will enable Iran to move heavy weapons by ship to Syria where they can be used against Israel. The US military has deployed B-52 bombers to the region but won’t say where they were being based (seventh link). A base in Saudi Arabia is possible, although my personal guess would be they will be based at the huge US military base at Diego Garcia in the Indian Ocean.  So far, neither side is backing down.

Now I would like to suggest another aspect of this developing confrontation that has ramifications far wider than just the Mideast region. Back in 2010, a report by the Council on Foreign Relations(CFR) documented from sources including Wikileaks that Iran and North Korea were cooperating in their nuclear weapons and ballistic missile programs (eighth link). The report also stated that China has been a cooperating nation to provide transit rights for ballistic missiles built in North Korea to be shipped to Iran. Obviously, any such missiles can threaten Israel and all Sunni nations in the Mideast. The CFR is often linked to the Trilateral Commission and the Bilderberger Group which bring the world’s globalist power-brokers and intelligentsia from both the private and public sectors together for secret meetings.  If the CFR knew about these North Korean-Iranian nuclear weapons/missile ties almost a decade ago, you can be sure the world’s leaders still know about it today. A media report just last year affirmed the close ties between North Korea include cooperation on missile-launching submarine designs for both nations and other key military programs as well as describing roles for Russia and Pakistan (ninth link). One of the topics in the summit meetings between President Trump and President Kim of North Korea almost surely included North Korea’s shipments of strategic weapons and /or ballistic missiles to Iran. Indeed, the question needs to be asked: Since North Korea is a very backward nation which cannot feed its people and can barely produce even minimal amounts of electricity, how did North Korea build huge nuclear warheads and ballistic missile program so rapidly? I think it may be evident that Iran and likely China has helped North Korea’s nuclear weaponry/missile program advance so rapidly. Indeed, much of the Iranian nuclear weapons program may actually be located in…North Korea, to keep it located far from Israel’s reach. The crisis between the USA and Iran is developed just as North Korea launched a new salvo of missile tests and Japan’s new media reports (tenth link) one of them may have been a short-range ballistic missile (which obviously could hit South Korea or Japan).

The above information indicates the crisis between Iran and the USA may also involve a simultaneous crisis between North Korea and the USA, and that nations all across the Mideast and Pacific Rim could be potentially drawn into the crisis. It may be that Iran’s instigation of the latest Hamas rocket attack against Israel from Gaza and the latest North Korean firing of missiles salvos instead of “denuclearizing the Korean Peninsula” (as North Korea pledged to do) have exhausted the patience of Israel, the USA, Sunni Mideast nations, Japan, etc. Based on the CFR report and the report from The Hill, it is clear that you cannot deal with the Iranian nuclear program unless you also address its presence in North Korea as well. While it is possible war may be averted (they usually are), this crisis has a different “feel” to it, and I do not believe it is another “drill.”

From a biblical perspective, these moves and counter-moves fit perfectly with the prophecy in Ezekiel 38-39 which accurately predicted the modern development of the God-Magog alliance (Russia, China, Iran, North Korea, etc.) and the Western alliance led by NATO and their global allies. The western alliance is led by the modern descendants of the supposedly “lost” ten tribes of Israels who were prophesied to grow into very major nations (Hosea 1:10) after their exile from the Promised Land in the 8th century BC. As is abundantly documented (from both secular evidence and biblical prophecies) in my books on the history of the ten tribes of Israel from their beginnings to the modern world, the USA and many European nations are the modern ten tribes of Israel whose modern characteristics were accurately prophesied in Genesis 49 and other biblical prophecies about their role in the latter days of our age just prior to the return of Jesus Christ [The books may be obtained at this website’s home page]. While Ezekiel 38-39 specifically addresses a great, age-ending world war between these two blocs, Matthew 24:6-7 prophesies many wars will occur during the latter days before the final climactic war foretold in Ezekiel 38-39 occurs. It would not surprise me at all if regional wars or proxy wars between these two rival blocs occurred prior to the age-ending World War III prophesied in Ezekiel 38. We should know before too long if the current American-Iranian face-down leads to such a war or not.

For more in-depth analysis of the biblical prophesies and narratives which are related to topics discussed above, please read my free articles, Are We living in the Biblical Latter Days?, What Ezekiel 38-39 Reveals about a Future World War III and The USA in Biblical Prophecy.