IS A REGIONAL WAR IMMINENT IN THE MIDDLE EAST? 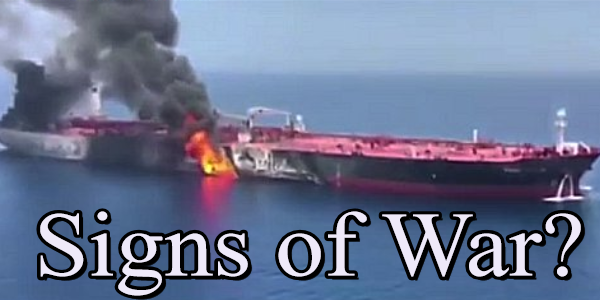 War is looking more likely than ever in the Middle East and it could start in at least three flashpoints. Attacks on two oil tankers in the Gulf of Oman have escalated tensions to a point where military action could start at any time. The two oil tankers were damaged either by torpedoes or mines. The Gulf of Oman is east of the Strait of Hormuz in a bay which widens out into the Indian Ocean. These attacks, combined with the attacks on several other tankers a few weeks ago, send a message (from Iran?) that ships are vulnerable to attack either side of the Strait of Hormuz, which makes oil shipments via the Persian Gulf riskier.

The first four links offer perspectives on these latest attacks from media sources in Asia, Europe, and the English-speaking nations. The photographs graphically show the extent of the damage suffered by one oil tanker. It seems evident that the attackers intended to sink the ship, based on the extensive damage to it. The first link mentions that these latest attacks raise fears of a major conflict breaking out in the region, and the second link mentions that this attack occurred as Japanese Prime Minister Abe was ending a trip to Iran to try and defuse the tensions, which may be significant as one of the oil tankers attacked was Japanese-owned. The third link, a site that follows military matters, reports that the US Navy came to the aid of the stricken tankers and that Iran has laid mines in the sea lanes where the oil tankers were damaged. It also adds that Iran has “quadrupled” its production of low-enriched uranium as part of its nuclear program. The fourth link reports that the second oil tanker hit was a Norwegian vessel, and states the obvious by noting that these major attacks on oil tankers are a “hugely significant act.” Indeed, they can easily be considered an act of war if it can be determined who attacked these tankers as well as the previous tankers attacked several weeks ago. The fourth link also reveals that there was enough physical evidence gathered at the attack sites to submit it to scientific analysis to determine who perpetrated this deed. US Secretary of State Pompeo blamed Iran for the attacks. If forensic examination of the evidence ties the attack to an Iranian source, do not be surprised if a military reprisal vs. Iran is launched. This series of event is clearly headed for a regional war unless it is defused quickly.

There are two other flashpoints in the Mideast that could either start a regional war or be quickly dragged into a conflict that begins in the Persian Gulf region. The fifth link reports that a missile fired by Iranian-backed Houthis in Yemen hit a Saudi Arabian airport and injured 26 people. The Houthis have also used drones to attack Saudi oil-pumping stations, and some Houthi drones have been shot down by Saudi forces. The Saudi-led coalition that is fighting the Iranian-backed Houthis stated that these attacks confirm that the Houthis have received “advanced weapons from Iran.” Iran denies involvement, but I doubt anyone believes them. The Houthis are an Iranian proxy force; who else but Iran could be arming them?

Additionally, the Israelis have discovered a massive tunnel complex that Hezbollah, another Iranian proxy force, has secretly dug underneath the Lebanese-Israeli border which opened into Israeli territory (sixth link) near the moshav of Zar’it in northern Israel. The tunnel is reported to be about a mile long and was as deep as a 22 story building is tall. This is a highly-sophisticated tunnel built by Hezbollah with materials and financing supplied by Iran. Obviously, this tunnel was intended to be used by hundreds of Hezbollah fighters who would have emerged inside Israeli territory during a future war. Since the tunnel was nearly completed and was equipped with electrical and communications support services, it begs the question of whether Hezbollah was timing an attack on Israel to occur soon after the tunnel was finished. It also begs the question of how many other similar tunnels have been built by Hezbollah. Hezbollah built the tunnel very deep, no doubt, to try to evade Israeli listening devices. This story has a personal connection for me as I was at the Israeli border with Lebanon not many miles distant from this tunnel location in August 2000. I visited the border with Yair Davidy, an Israeli author who also writes books about the modern locations of the ten tribes of Israel [Yair is a friend and ally in the effort to inform modern readers that the ten tribes of Israel can be located in the modern world largely in Europe and North America–our major conclusions are in agreement]. As a result of that visit to the militarized border between Israel and Lebanon, I can truthfully say that I have seen Hezbollah-controlled territory laying on the other side of the militarized border.

A Middle East war could break out in the Persian Gulf region, along the Israeli-Lebanese border or in the southern Red Sea/Houthi-Saudi conflict zone, or it could break out and involve all three of these zones. The sixth link reports that Hezbollah has 120,000 missiles in Lebanon aimed at Israeli targets. That is an immense number of missiles. Israel has a very sophisticated and layered air defense system, but with so many missiles, it is inevitable that some will get through Israeli defenses. Ironically, in any such war, the greater the damage inflicted by the Iranian-supplied missiles, the greater will be the retaliatory violence wrought by Israel against not only Hezbollah’s territory, but also against Syria and Iran–the nations that have armed and facilitated Hezbollah’s missile forces. If Israel is damaged heavily by Hezbollah’s missiles, expect Syria and Iran to suffer even greater damage from the Israeli military. To prevent Hezbollah from ever again threatening Israel, the Israelis may have to occupy southern Lebanon to disarm and dismantle all Hezbollah missile-firing locations.

This rising possibility of war in the Mideast has clear biblical ramifications. Ezekiel 38:2-6 identifies the modern nations in the Gog-Magog alliance that will eventually attack the modern nations of the ten tribes of Israel during the “latter days” (Ezekiel 38:8 and 16)– the very time in which we are living. In biblical prophetic terminology, “Judah” refers to the Israelis/Jews and “Israel” refers to the modern nations descended from the ten tribes of Israel, who migrated to new locations on earth and did not return to the former Promised Land. Indeed, few in the nations of the modern ten tribes of Israel realize that they have such a descent. Ezekiel 38:2-6 includes “Persia” as a member of the Russian/Chinese-led alliance and Persia designates the modern nation of Iran. Iran’s animus, vs the USA, the Israelis, and the western nations, is known to all. Iran has stated openly its goal of “wiping Israel off the map.” It is possible that Iran intends to foment a war in the Mideast that is intended to destroy Israel as a nation and extend Iranian/Shiite hegemony over the Arab/Sunni nations.  For much more in-depth information about the fact that we are living in the end-times age and that the fulfillment of the Ezekiel 38-39 may be only a few years ahead of us, please read my free articles,  Are We Living in the Biblical Latter Days? and What Ezekiel 38-39 Reveals about a Future World War III.  I also urge readers to obtain copies of my books on the history and modern locations of the ten tribes of Israel; these books can be ordered at the home page of my website.

If a major Mideast war takes place, I expect Iran to be heavily damaged by the end of the conflict. Many people in many nations would suffer from such a war.  While Ezekiel 38-39 is about a specific World War which will be fought at the very end of this age and which precipitates divine intervention, that prophecy does not at all preclude major regional wars from being fought before a final World War III occurs. The South China Sea, the Korean Peninsula, and the island of Taiwan are three other areas where regional wars could easily occur before the final great war of Ezekiel 38-39 is fought. Indeed, if a major Middle East war breaks out, either China or North Korea might be emboldened to launch an Asian regional war in the aforementioned Asian flashpoints to take advantage of a situation where America’s forces are stretched thin due to any Mideast War involving the USA and its allies vs Iran and its allies. While a Mideast War is not a certainty, it is growing more likely. If there are more attacks against oil tankers carrying Saudi or Emirati oil, I think military reprisals vs. Iran will begin. If they do begin, we cannot predict how widely the conflict will spread or how long it will last.