IRAN STILL PUSHING FOR DOMINANCE OVER THE MIDEAST 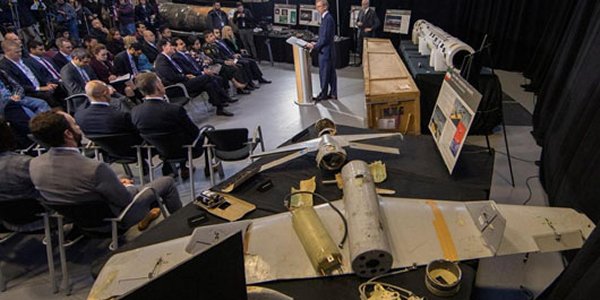 This post is to give readers new information about Iran’s ongoing efforts to impose its dominance over the Mideastern nations. Iran has developed a new strategy for putting its forces into position inside Syria to attack Israel, and more information about the history of its nuclear weapons program have been made public.

The US government displayed a wide variety of weaponry shipped by the Iranians to their proxy force in Yemen, the Houthi rebels. The cache of seized or intercepted weapons included missiles and rockets, anti-tank weaponry and types of infantry weaponry (first link). Some of the weapons had Iranian-language markings so there is no doubt who shipped them into the Yemeni civil war zone. The Iranians also were caught shipping weapons to the Taliban forces who are fighting American troops in Afghanistan. The second link is about the US Secretary of State, Mike Pompeo, warning that Iran’s test of medium-range ballistic missiles violates the UN’s resolution to curtail Iran’s nuclear weapons program as well as ballistic missile programs to deliver nuclear warheads. I think it is clear that Iran couldn’t care less about the world’s desire to keep Iran from obtaining nuclear missiles (more on that topic below). Iran’s test is not only to perfect its ballistic missiles but to also intimidate the Mideast’s nations to bend to Iran’s will.

The third link is from an Israeli media source which details a plan by Iran and its Syrian ally to move “thousands” or even “tens of thousands” of Iranians to Syria by giving them Syrian identification papers. It has long been reported that Israel has launched a series of air strikes over the years against Iranian military concentrations inside Syria to prevent Iran from enlarging its forces inside Syria to the point they can join Hezbollah and Syria in attacking Israel. The report indicates that many of these Iranians being resettled inside Syria are fighters from Iran’s Revolutionary Guard forces. The fourth link shows that this program has been going on for some time as it is a 2017 link which focuses on another aspect of this resettlement program. It reported that once-Sunni regions inside Syria were being repopulated with Shiite Muslims who are loyal to the Iranian and Syrian Shiite leadership. It adds that Shiites from as far away as Afghanistan were being resettled inside Syria in order to make Syria steadily-more Shiite in nature. As this trend continues, Iran is preparing Syria to be a jump-off point for an Iranian attack on Israel that would almost certainly be timed to coincide with Iranian-backed attacks by Hezbollah and Hamas.

Speaking of Hezbollah, authorities in Europe have uncovered a money-laundering operation inside Germany which has been used by an alliance of Hezbollah and drug cartels to launder drug money in order to buy weapons for Hezbollah (fifth link). Amazingly, Germany has reportedly given Hezbollah the right to have its agents operate openly inside Germany. Obviously, Iran is using every means possible to fund an army large enough to attack and invade Israel. Iran has stated in the past that they want “to wipe Israel off the map.” Iran was not kidding. They intend to pursue every means possible to accomplish that goal. Israel is equally determined to make sure such a thing never happens. One does wonder how long Israel will hold off launching a pre-emptive strike against Iran and its proxy forces to prevent Iran from gathering its forces for a massive first strike.

The sixth link documents that as early as the late 1990s, Iran had been working on a nuclear weapons program to initially develop five nuclear devices. Originally, Iran wanted to have them developed by 2003, but a variety of international efforts have slowed down Iran’s nuclear program. We know about the Stuxnet virus which was planted inside Iran’s nuclear weapons program computers years ago which set Iran’s program back for a long time. Some key Iranian scientists have reportedly been assassinated over the years. This link reveals these and other conclusions which can be drawn from a partial release of the treasure trove of Iranian nuclear-related documents that were seized by Israeli intelligence operatives in a massive intelligence coup. I would not be surprised if the seized secret Iranian files have revealed to the Israelis the locations of previously-unknown nuclear research facilities inside Iran as well as the names of Iranian spies and operatives all over the world.

Clearly, the national goals of Iran and Israel are mutually exclusive. Biblical prophecy reveals that Iran will surely try to annihilate Israel in the future, but that its invasion will ultimately fail. Zechariah 12 and 14 prophesy that God will protect “Judah and Jerusalem” from a great invasion in the latter days just prior to the advent of the Messianic Age. Issues and controversies about Jerusalem and its status have, indeed, become the “cup of trembling” and a “burdensome stone” to the region and world that Zechariah 12:2-3 prophesied. These prophecies also affirm that Judah (the Jews/Israelis) will be in control of Jerusalem in the latter days at the end of this age. These prophecies have literally come to pass.

Zechariah 14 indicts that in a yet-future invasion, the city of Jerusalem will be taken by an invading force just prior to divine intervention which slaughters the invaders and makes Jerusalem a world capital. We Christians believe that Jesus Christ will be that Messiah when he returns as the “conquering Messiah.”  Zechariah 14:14’s language reveals the war is not over when divine intervention occurs. The city of Jerusalem will be just one locus of fighting in the final World War III which will occur at the end of our age. Revelation 16:12-21 also prophesies that another huge battle will be raging in the Har Megiddo region in the Valley of Jezreel (“Armageddon”). These battles in Jerusalem and Megiddo will be just one aspect of a great World War III which will erupt on the earth at the very end of this age. Notice Revelation 16:12-14 prophesies that a great invasion will be launched westward by “the kings of the east” from the River Euphrates. The Shiite central government of Iraq is largely a puppet of Shiite Iran already, and the Euphrates River flows through Iraq. It would be totally logical in today’s geopolitical situation that Iran would launch an invasion of Israel (and likely the Sunni Arab allies) from a staging area along the Euphrates River. While Revelation 16 reveals from where this invasion will begin, Zechariah 14 reveals how the invasion will be defeated and ended.

Iran is one of the members of an age-ending Gog-Magog alliance listed in Ezekiel 38:2-6 (it is called by its ancient name–“Persia”). Iran will be part of the eastern alliance led by Russia and China who will be attacking the modern nations of the house of Israel at the same time Iran is attacking the Israelis. Just as World Wars I and II had many theaters of fighting, so will World War III. Zechariah 14 describes the fighting in just one of those global theaters of combat. While the Bible foretells a great World War III will erupt at the end of this age and that it will include an invasion of Israel and the Mideast launched from the Iran-Iraq region, these prophesies do not preclude one or more regional wars in the Mideast and other areas of the world before the final great conflict erupts. Indeed, it is my opinion such preliminary wars are likely.

For more extensive information about the topics discussed above, please read the following free articles on my website, stevenmcollins.com. The articles are: Are We Living in the Biblical Latter Days?, Four Reasons the Jews are Judah and What Ezekiel 38-39 Reveals about a Future World War III.