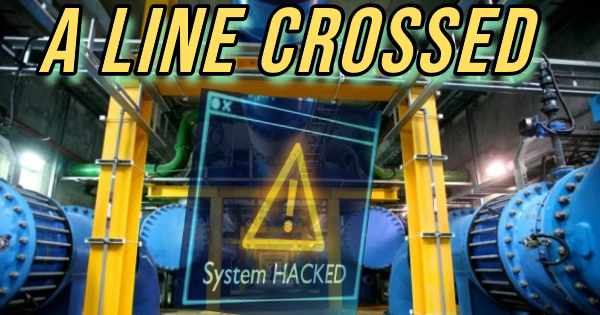 As I’m sure readers realize, Iran has long had a state policy of “wiping Israel off the map.” Iran’s belligerence against Israel is implacable. Iran just took a step which the first link describes as “crossing a red line” and a “major escalation” in Iran’s plan to destroy Israel. Iran launched a cyber-attack against a number of Israel’s water-system infrastructures, but the Israelis were able to use countermeasures to fend off the attack with little damage.

The second link reports that the Iranian cyber attack was “widespread,” and that it was routed via servers in the USA. This fact confirms that in the world of cyber-attacks and cyber-defenses, the true point of origin for cyber-attacks can sometimes be camouflaged by utilizing (or stealing) access via third-party servers in other nations. The third link adds that Iran tries to launch cyber-attacks vs Israel “on a daily basis,” but that Israel regularly blocks such attacks. The link also adds that the attacks go both ways. It asserts that Israel and the USA have used cyber-attacks against Iran’s nuclear facilities to try to sabotage them digitally instead of with actual bombs. Iran has also sent many of its forces into Syria to mass inside Syria and South Lebanon (controlled by Hezbollah) to prepare the way for an actual military attack vs. Israel. Such an attack could be a missile attack vs. Israeli military and civilian targets, but it could also include an attempted invasion to “destroy Israel.” Israel has launched many attacks against Iranian and Iranian-controlled military targets inside Syria to ward off any such attack.

The above information indicates that there is already a low-level war going on between Iran and Israel. It is one thing to target a rival’s military targets, but it does cross a red line when attacks are made against civilians. Iran’s cyber-attack vs. Israeli water facilities is an attack vs. all of Israel’s civilians as well as its military. Water supplies are critical in the arid Mideast, and Iran’s effort to damage Israel’s water supply is a very risky step. Indeed, such an attack it is just short of open war. If Iran ever starts launching the approximately 100,000 missiles and rockets into Israel, expect Israel to immediately retaliate with very deadly force. I would expect Israel’s retaliation to not only shut down Hezbollah’s ability to wage war from South Lebanon but to include targets in Iran itself. Iran better, be careful with their missile guidance systems though. If they fire missiles into Israel and some of their missiles hit and damage the Dome of the Rock or the Al Aqsa mosque in Jerusalem, the rest of the Islamic world will never forgive Iran. Indeed, the Sunni Islamic forces may declare a “jihad” vs the Shiites if such a thing happens.

Any attempt by Iran, Syria, and Hezbollah to invade Israel from the north with ground forces would surely be met with instant and very lethal responses. When I was in Israel in August 2000, I stood, literally, on the last few feet of Israeli soil at the Israeli-Lebanese military border at the foot of a very tall metal fence. The border had a tall double row of fences, lighted towers, and a no-man’s land between the tall fences that was almost surely mined; how the border has been strengthened today I do not know. Many Israeli civilians live in northern Israel south of Lebanon and the Golan Heights. Any mass attack vs. Israeli targets would cause many Israeli casualties very quickly, so Israel must have a plan to counter the attacks with crushing defensive military actions of their own. Such actions would be offensive in nature as well as utilizing the very sophisticated defensive systems Israel has vs. missile attacks (Iron Dome, David’s Sling, etc.). When I was in Israel, I stayed the night at a kibbutz in Northern Israel and I was awed by the sight of the Golan Heights looming overhead just a short distance away when I looked up in the morning light. Its strategic importance is obvious. Israel can never give it back to Syria, which used to rain rockets and artillery shells down on Israeli cities from that strategic height.

Israel has no intention of being “wiped off the map.” In making an open effort to do such a thing, Iran is playing with fire. The Bible also has prophecies affirming that the Israeli nation will not be destroyed. Zephaniah 2:1-10 accurately foretold that the Jews would have a nation of their own again in the latter days and that their land would include the Mediterranean coastal strip and the city of Ashkelon. Both of these prophecies about the geography of the Israeli nation precisely came to pass when Israel was founded in 1948. Verses 8-10 proclaim God’s intention to be “terrible” (KJV) to the nations which challenge or attack Israel’s borders. Zechariah 12:1-9 prophecy that God will destroy the nations that dare to attack Judah (the Israelis) and the city of Jerusalem. Zechariah 14:1-2 foretells the city of Jerusalem will be invaded at the end of our current age, and that it will partially be taken before a terrible death strikes the invaders (verses 3-14). Their flesh will melt off their faces and bodies before they have time to fall over (verse 12). This kind of gruesome death was depicted by Hollywood in the Raiders of the Lost Ark movie. This kind of death can come from the direct hand of God or it can be fulfilled by tactical and local-area nuclear weapons hitting the invading troops. For those readers who have not yet read my articles, Are We Living in the Biblical Latter Days? and What Ezekiel 38-39 Reveal about a Future World War III, I urge them to do so.

One last related item is worthy of mention (fourth link). The Iranian navy held an exercise recently to practice using their ship-to-ship missiles vs. maritime targets. The Iranian Navy hit one of their own naval ships with an errant Iranian missile. This makes the Iranian Navy look like a naval version of the old “keystone cops.” If they can’t even tell the difference in their aiming systems between one of their own naval ships and a towed target, it doesn’t do much to enhance respect for Iran’s ability to make war. That their missile could be aimed or fired in a way that it could go so badly off course, it does make us wonder how accurate the Iranian missiles are which Iran has placed in South Lebanon and in Syria. If those Iranian missiles are fired at Israel but also go haywire and hit the Dome of the Rock and Aqsa Mosque and targets in Nablus and Ramallah, there will be “hell to pay” for sure.

Even in these times when the global coronavirus pandemic attracts almost all the news coverage, keep your eye on the Mideast. If some of Iran’s missiles and rockets in South Lebanon and Syria are ever launched against Israel even by accident, it could start a large regional war very suddenly. That naval exercise where the Iranians hit their own ship with a missile shows their rocket forces may not be all that professional.