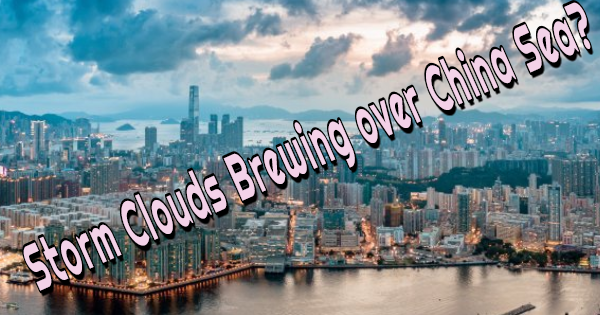 While the world may not be paying much attention to events in such places as Hong Kong, Taiwan, and Vietnam, recent events in those nations show there is a heightened risk of a war erupting in that region of the world. I’m sure most readers are familiar with the near rebellion that broke out in Hong Kong when its citizenry rose up in anger over an extradition law about to be imposed by the Communist Chinese administrator of the former British crown colony. Protesters estimated in the hundreds of thousands or even millions confronted police and invaded and heavily damaged Hong Kong’s governmental administration facilities (first link). What really grabbed my attention was that protesters tore down China’s flag and raised the old British crown colony flag. The symbolism of this action cannot be overstated. There is clearly a great desire among the, Hong Kong people to be governed by the British government instead of the Chinese government. This act had to be seen in Beijing as an act of outright rebellion. Indeed, this act of flying the Union Jack flag in Hong Kong has led to a “war of words” between China and the United Kingdom. Both nations have warned the other about their actions and the British government warned the Chinese ambassador of “serious consequences” if China refuses to allow the limited autonomy and freedoms granted to Hong Kong’s citizens when the British relinquished control of Hong Kong in 1999 after a very long reign over that city (second link). That limited autonomy is often described as “One China, Two Systems” Perhaps the British warning about “serious consequences” against China could hint that economic sanctions may be imposed on China for its actions.

Taiwan also has become involved in the massive Hong Kong protests. The President of Taiwan is being pressured to pass legislation that would allow Taiwan to give sanctuary to the Hong Kong protesters whom China is hunting down and wanting to arrest (third link). This further exacerbates the tensions between China and Taiwan. China wants to assume control of Taiwan, and Taiwan’s willingness to shelter Hong Kong’s rebels will surely anger China. Simultaneous to the uproar in Hong Kong, China has vented its anger at Vietnam’s government because Vietnam allowed Taiwanese-owned facilities to fly Taiwan’s flag in Vietnam to indicate their facilities are not Chinese-owned. Taiwanese firms in Vietnam feared their facilities would be picketed or targeted by anti-Chinese protesters (fourth link). Additionally, the United States is selling up to 66 advanced F-16 fighters to Taiwan and deliveries may begin in 2020 (fifth link). Taiwan badly needs these fighters to help deter an attack of Communist China against Taiwan. Indeed, providing Taiwan with the ability to defend itself against China might actually help deter war in the region. If Taiwan is too weak, it may embolden China to invade Taiwan, which would almost surely bring the USA and other nations into the war on the side of Taiwan. Taiwan has every right to defend itself against Chinese aggression, as do the other nations in Southeast Asia.

The above tensions are occurring even as both China and nations threatened by China are conducting rival major naval exercises in the South China Sea. China is asserting control over almost the entire South China Sea, a claim that cannot be justified in any international maritime law. Other nations vigorously oppose China’s claim over that busy maritime body of water. China is continuing to make such an outlandish claim anyway. Chinese naval warships conducted a very provocative naval exercise recently–sailing a Chinese carrier and its escort vessels near the US territory of Guam, around the Philippines and then through the Taiwan Strait. This was obviously a warning to the USA, the Philippines, and other Southeast Asian nations and to Taiwan. The USA, Japan, and India countered by staging their own joint naval exercise which also featured a lot of military-firepower. The USA, Japan, and India each provided an aircraft carrier to the exercise (the US carrier was the USS Ronald Reagan) as well as their accompanying escort ships. These respective military exercises are described in the sixth link and seventh link. Obviously, this exercise warns China that its claims to control of the South China Sea are not recognized by other nations and will be resisted militarily if China ever tries to seize control of that region. China has already built a number of artificial islands in the South China Sea on which it has placed military weaponry and airfields to handle Chinese warplanes.

The above actions are all contributing to an atmosphere of steadily-rising tensions in the South China Sea and Southeast Asia. As I have stressed in previous posts, the biblical prophecy of Ezekiel 38-39 is about the final, age-ending World War III that will be fought between two sets of rival global alliances. One is the Gog-Magog alliance of Russia, China, Iran, etc. The other is the alliance of the USA and its NATO allies as well as Japan, India and other allied nations in Asia.  The Ezekiel 38-39 prophecy does not preclude regional wars between these rival alliances or their proxy forces in the years prior to the final prophesied World War III. Matthew 24:7’s prophecy about “wars and rumors of wars” characterizing the latter days that would precede Jesus Christ’s prophesied return indicates that there will be a crescendo of rising conflicts in the latter days that will culminate in the Ezekiel 38-39 war. This prophecy certainly allows for regional wars between the two major end-time blocs to occur.

For those desiring in-depth information about how accurately Ezekiel 38-39 has foretold the composition of today’s modern alliances, please read my free articles, What Ezekiel 38-39 Reveal about a Future World War III and Are We Living in the Biblical Latter Days?

One last thought: I sure would like to have been the proverbial “mouse in the corner” to see the reaction of the Chinese leadership when they saw media reports of Hong Kong protesters raising the British flag in Hong Kong’s official governmental chambers.