EGYPT AND ETHIOPIA NEAR OPEN WAR OVER NILE WATER RIGHTS 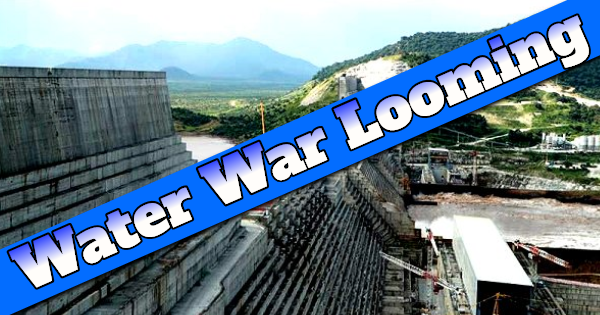 As the world is preoccupied with the coronavirus pandemic, the overlooked chances of an open war between Egypt and Ethiopia are growing as Ethiopia’s needs for electricity is in conflict with Egypt’s need for water from the Nile River. For years, Ethiopia has been building a huge dam which will create massive amounts of electricity and hold back a great volume of water in a reservoir. However, the dam is being built on the main tributary to the Nile River, on which Egypt depends for water to feed its people. Also for years, negotiations between Egypt and Ethiopia have been taking place to try to reach an agreement on how the needs of each nation can be satisfied as the dam nears its operational date. Sudan, also dependent on the Nile River for water, has been a third party in these talks.

The first link reviews the history of the negotiations, and what has brought them to the point of stalemate. Ethiopia feels it has sovereign rights to build whatever it wants on its own territory but Egypt and Sudan assert their water rights to the Nile River to feed and support their populations. Egypt wants an agreement that guarantees a minimum flow of water downstream in drought years so Egyptians can feed their nation. That hardly seems unreasonable, but no agreement has been reached despite the fact that the USA, the EU, the African Union and the World Bank have all made attempts to broker an agreement. The second link adds that there are eleven nations in Africa affected by what happens on the Nile River, and that a, peaceful agreement would benefit everyone in the region. It adds China has also tried to broker a settlement, and that a considerable amount of Chinese money has financed the dam project in Ethiopia. It also briefly mentions Egypt’s reservoir of water held back by the Aswan High Dam, but it offers no details on how long that reservoir of water could supply Egypt’s water needs in the event of a prolonged drought without a steady supply of water from the Blue Nile in Ethiopia. The first link noted that the Blue Nile, which flows through Ethiopia and which will be backed up by the new dam, supplies 85% of the water flowing downstream to Egypt and Sudan. Given the hot, dry climate of the region, the evaporation rate from the Nile River, its tributaries, and from all reservoirs in the region, must be immense. For this reason, a steady and reliable supply of water is needed by all nations along the Nile River and its tributaries.

The latest update, in the third link, sounds grim. It states the latest efforts to resolve the dispute peacefully have “failed,” and it examines the “prospects for the inevitability of war between Egypt and Ethiopia.” I do not know, statistically, how long of a drought is necessary before the filling of the reservoir at the Ethiopian dam could threaten Egypt’s water needs, but if Egypt is ever pushed to the brink where it cannot rely on a dependable amount of water reaching it via the Nile River from upstream, then Egypt would have to go to war to make sure the water flows again. Given Egypt’s complete dependence on the Nile River for its water needs, Egypt has to act well in advance of a time where it would run out of sufficient water. If war does come, Egypt could attack the dam with bombers and/or paratroopers to breach it so Ethiopia cannot divert the Blue Nile’s water to fill its reservoir. I do not know if Egyptian bombers have sufficient range to reach the dam from an Egyptian airfield or whether they would need to stage operations via Sudan or Saudi Arabia. Egypt has one major card to play to compel other nations to take its side in any war with Ethiopia. Egypt controls the Suez Canal, a vital maritime route for international commerce between all nations and continents. If any nation sides with Ethiopia against Egypt, Egypt can forbid the ships of any such nation from using the Suez Canal. On the other hand, Ethiopia is located at the southern approach to the Red Sea which controls access to the southern end of the Suez Canal. Ethiopian artillery and rockets could threaten any ship which is seeking to approach the Suez Canal from the south. Access to the Suez Canal could quickly cause an Egyptian-Ethiopian war to escalate and affect the global economy at a time when it is struggling to cope with the negative impacts of the coronavirus pandemic.

There is another complicating factor. The small nation of Djibouti, also located at the southern end of the Red Sea, hosts military bases and/or forces of several major nations, including China, the USA, France, Italy, and Japan. The fourth link details recent upgrading of China’s pier facilities in Djibouti to accommodate larger Chinese warships and the fifth link gives the historic development of how Djibouti came to host military bases for so many foreign nations at its strategic location. Ethiopia has been taking a very hard line with Egypt and Sudan in its negotiations. It does beg the question: Does Ethiopia have a great power backer that has offered assurances of protection if a war breaks out? If so, that nation is almost surely China, which has a military presence at near-by Djibouti and which has a major investment in the Ethiopian dam. With so many major nations facing each other militarily at Djibouti and with access to the Suez Canal hanging in the balance, the world economy will be threatened if an Egyptian-Ethiopian war breaks out. Such a war could quickly escalate into a great power confrontation.

Because so much damage could come from an Egyptian-Ethiopian war, it makes complete sense that a negotiated agreement should be possible which allows Ethiopia to fill the reservoir behind its new dam at a rate which still guarantees a minimum, the needed amount of water for Egypt and Sudan. However, logic does not always carry the day. The risk of such a war occurring is growing. There is a clear “breakpoint” that could start such a war. If Egypt clearly believes Ethiopia is threatening Egypt’s water and food supplies, Egypt will go to war.

Matthew 24:4-8 prophesies that “wars and rumors of wars” will characterize the latter days of our age when a climactic time called “the beginning of the end” is reached. This prophesied time will also be characterized by “pestilences” and “famines,” and we have a global pandemic now affecting the entire planet as well as massive locust swarms that have endangered food supplies in East Africa and South Asia. Are we now entering the prophetic time called the “beginning of the end” prophesied in Matthew 24:4-8 to mark the arrival of the final sequence of chaotic prophetic events that will climax our age? If any reader needs proof that we are living in the biblical prophetic time called the latter days, please read my article entitled, Are We Living in the Biblical Latter Days? Let us hope the Egyptian-Ethiopian confrontation will be resolved without a war; however, the time for a negotiated settlement is fast running out.