DOES JAPAN ALREADY HAVE NUCLEAR WEAPONS? 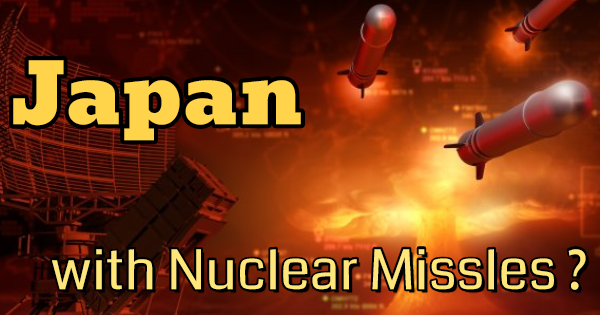 No doubt, readers are well-aware of the North Korean nuclear weapons program, and the growing militarism of China in both their conventional and nuclear weapons efforts. Japan sees these hostile neighbors already having nuclear weaponry and it has to feel a growing sense of anxiety about these existential threats to Japan. Indeed, North Korea has already fired nuclear-capable rockets over Japan’s mainland. Japan is currently protected under the American nuclear umbrella and the presence of substantial American forces in Japan, but it has no guarantee it will always have this protection.  President Trump’s robust rebuilding of the American military has to give Japan a sense of security as does the apparently very close personal relationship between Japanese Prime Minister Abe and President Trump. However, Japan’s security situation could change quickly for the worse if a leftist Democrat wins the White House in the 2020 US elections. Leftists are notoriously anti-military and cannot be trusted to defend America’s own national interest, much less the interests of Japan or any other ally. This post will examine the possibility that Japan already has nuclear weapons, but that it possesses them with plausible deniability.

The North Korean threat has risen with reports that that nation now has miniaturized nuclear warheads to the point that they can be placed on North Korea’s rockets (first link and second link). Given the short distance from the Korean Peninsula to Japan, North Korea could fire nuclear warheads at Japan without any need for long-range ICBMs. If Japan decides that the existential threat to Japan posed by Chinese and North Korean nukes is so great that it must build its own nuclear weapons, how soon could it have them? The third link examines that very question by posing it to an international panel of experts. The consensus is that Japan could have nuclear weapons within several months to a year if it started from scratch–more than one expert cited a six-month estimate for such a project. The first opinion cited in the link asserts that Japan has nine tons of plutonium stored in Japan and 35 tons of plutonium stored off-shore in France and the United Kingdom. Keep that statistic in mind as this post will come back to that data later. The possibility that Japan already has nukes can also be found in the third link.

The fourth link offers a discussion of why Japan doesn’t already have nuclear weapons, given Japan’s undoubted ability to construct them. The lingering after-effects of World War II is a big reason, but that reason is fading into the background as current realities have radically shifted from the World War II years. China and the USA were allies against Japan in World War II, but now Japan and the USA are close allies vs. China. Japan’s pacifist Constitution is an obstacle as well, but given the obvious and growing nuclear threats from China and North Korea, any Japanese nukes could now be defined as “defensive” weaponry simply due to their deterrent capability. Prime Minister Abe is also within striking distance of an alliance in the Japanese Diet that would rewrite the Constitution to allow Japan to develop any weapons it feels it needs. The link, correctly, in my opinion, expresses a belief that if Japan obtains nuclear weapons, such nations as South Korea and Taiwan will both need and want them too. The fifth link analyzes why China greatly fears a Japanese nuclear arsenal, and it also asserts that Japan has nine tons of plutonium in Japan and 35 tons of plutonium stored in France and the United Kingdom.

Japan’s need for its own nuclear weapons arsenal was just increased by an odd development. South Korea terminated its intelligence-sharing agreement with Japan (sixth link and seventh link). South Korea’s leader seems to have developed a very cozy relationship with North Korea’s dictator prior to South Korea distancing itself from Japan as an ally. Let’s hope that South Korea’s current government is simply misguided or is motivated by domestic political considerations, but South Korea distancing itself from its traditional tripartite alliance with the USA and Japan is worrisome not just in Japan but in the USA and the entire Indo-Pacific region. With South Korea acting less like an ally, Japan needs, even more, to look to its own defenses and that means …nuclear weapons.

Let’s look at North Korea a little closer to consider the secret partner in its nuclear program. North Korea is an impoverished nation that is unable to feed itself and it can barely produce meaningful amounts of electricity. Look at a global night-time map of the world and see how little electric light emanates from North Korea. North Korea’s nuclear program would consume a tremendous amount of electricity and need many other resources. North Korea lacks the indigenous high-tech industries needed to build nukes. It needs help to produce any nuclear weapons. I would suggest to you that its secret partner is Iran, which eagerly wants nukes and nuclear-capable missiles but is laboring under intense international sanctions and is within range of Israeli military forces that can bomb any Iranian nuclear facility when the need becomes sufficiently threatening to Israel. The tenth link reveals the extent of North Korean-Iranian nuclear and missile technology cooperation. It does appear that the nuclear program inside North Korea could be a nuclear weapons-sharing effort with Iran. This all places Japan under an even greater sense of urgency to build its own nukes. I have no doubt Japan is aware of the North Korean-Iranian cooperation.

Now, let’s go back to considering those nine tons of plutonium held in Japan and the 35 tons of Japanese plutonium “stored” in France and the United Kingdom. What if there is a Japanese-French-British nuclear program going on clandestinely in France and the United Kingdom? Both France and the UK are established nuclear powers, and they could easily build huge numbers of nuclear weapons with those 35 tons of Japanese plutonium. Japan may already have a significant inventory of nuclear weapons…which are being stored on French and British soil until Japan feels it is politically acceptable to acknowledge them and bring them to Japan to be deployed vs. Japan’s potential enemies. Why else would Japan ship most of its plutonium to two other nuclear-armed NATO nations? This may also mean that the British and French have more nuclear weapons than the world realizes, as those two nations may be allocated a certain number of any nukes built from Japanese plutonium. Japan could quickly buy missiles to deliver its nuclear warheads and it could also use its warplanes to deliver nuclear weaponry. I think China would find it most unnerving to think that Japan may soon have nuclear weapons capable of hitting the Three Gorges Dam and other key Chinese targets. Also, if Japan builds nukes, how long will it be until nukes are in the military arsenals of South Korea, Taiwan, Singapore, Australia and other nations threatened by China? Indeed, Japan has so much plutonium it could easily supply the nuclear needs of all other Indo-Pacific nations threatened by China. One more thought on this possibility. The building of a nuclear arsenal for Japan on French and British soil would allow Japan plausible deniability about being a nuclear power as long as none of them are currently located within Japan’s homeland.

Some readers may be unnerved by the thought of Japan having nuclear weapons. I am not in that camp, for two reasons. The first reason is the traditional values system built deeply into Japan’s culture.  A debt of honor owed to another must be acknowledged and acted upon in Japan’s culture. When Japan was defeated in World War II, it would have been turned into a permanent slave colony if it had been occupied by Russia or China. Japan had the great fortune to have General Douglas MacArthur in charge of the occupation of Japan. He understood Japanese culture so well that he fearlessly journeyed almost alone to see Japanese Emperor Hirohito; knowing the Emperor’s command to not harm him was the only protection he needed. He knew the Japanese armed forces and people would do anything asked of them by their Emperor so he honored the position of the Emperor and made Hirohito a de-facto American ally in the rebuilding of Japan. I think the Japanese people were amazed that the American occupiers allowed the Japanese Emperor to stay in his revered position, and that America quickly began to rebuild Japan and mold it into a prosperous ally instead of crushing it for generations. For the very honorable and merciful treatment received by Japan from America at the end of World War II, Japan owes a debt of gratitude to America it can never repay. Japanese respect for so great a debt of honor is a powerful reason I have no problem at all in trusting Japan as an ally of the USA.

The second reason is that the Bible has a prophecy that Japan will not be an enemy of the USA in the great age-ending war foretold in both Ezekiel 38-39 and in the “Armageddon” prophecy of Revelation 16:12-17 and 19:11-20:4. The book of Revelation does not mention Japan’s role in the great end-time war, but Ezekiel’s prophecy does. This post is already long enough, so I will refer readers to a set of my articles that examines not only Japan’s role in latter-day prophecy but the roles of all major nations in the great age-ending World War III mentioned in several biblical prophecies. These free articles are The United States of America in Biblical Prophecy, Japan’s Role in Biblical Prophecy and What Ezekiel 38-39 Reveals about a Future World War III. Obviously, Japan is not called by its modern name in biblical prophecy; neither is the USA. One has to understand which ancient peoples are linked to the identities of modern nations in order to understand biblical prophecy and to also understand how incredibly accurate it truly is. My books, obtainable at my website’s homepage, reveal the biblical identities of many nations now located in the western world.