DOES AMERICAN-HEZBOLLAH FIGHT SIGNAL IRAQ’S SLIDE INTO AN IRANIAN ORBIT? 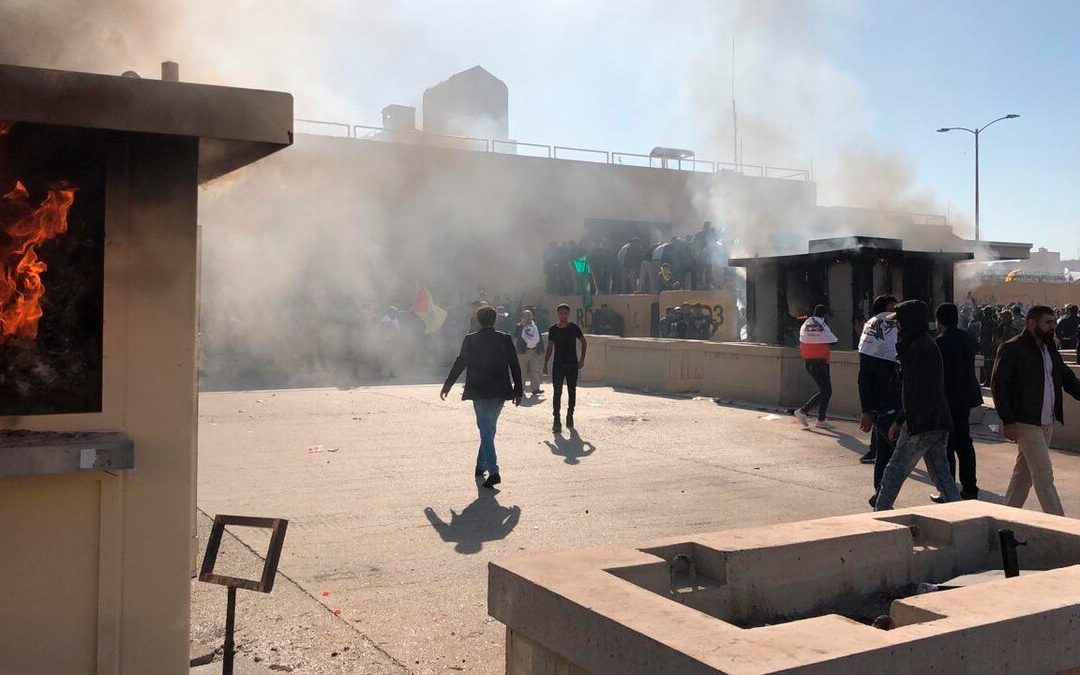 This entire confrontation began when Hezbollah-controlled forces fired approximately 30 rockets at a US base in northern Iraq. One American was killed, and several Americans and Iraqis were wounded. Since this attack was in northern Iraq where the Kurds are dominant, the “Iraqis” wounded in the attack may have been Kurds aligned with US troops. The first link at least mentions that it was Hezbollah-controlled forces who started this entire exchange. Since Hezbollah is controlled by Iran, it is almost certain that Iran ordered that strike vs. US forces. The USA retaliated by having air force warplanes attack five bases where Hezbollah and Iranian-backed militias are located (first and second link). Approximately 25 Hezbollah-aligned fighters were killed, and an unknown number wounded. I do not think that Iran and Hezbollah expected such a robust American counterattack.

To whip up their followers, Hezbollah-controlled militias and/or paramilitary groups attacked the US embassy in Baghdad (third link), doing considerable damage (see photos in fourth link). It needs to be realized that the American embassy in Baghdad is a huge, fortress-like complex in what used to be called the Green Zone, a safe area for coalition forces fighting in Iraq. It was built to withstand a considerable attack. Outer regions were taken over by the attackers and burned, but they were unable to penetrate the embassy where Americans and others were located. It is entirely possible that the attackers were hoping to replicate the Iranian seizure of the US embassy in Tehran during the hapless administration of President Carter. Under Carter, all the American diplomats and their staff were kidnapped by the Iranians (an act of war) and held captive for over a year, but Carter did nothing meaningful in response. They were freed just as President Reagan took office as the Iranians knew Reagan had a backbone and would initiate harsh attacks vs. Iran until the hostages were released.

While the attack vs. the US embassy was in progress, the US sent helicopter gunships to drop flares directly over the attackers, and the defenders inside the complex fired tear-gas and flash-bang stun grenades at the attackers. The clear message was that US helicopter gunships were not far away and that they would return with live fire upon the attackers if they persisted. US President Trump made it clear there would be “no more Benghazis” (fifth link), a reference to a time when President Obama and Secretary of State Clinton abandoned American diplomats and consular staff under attack in Libya in 2012. In spite of repeated calls for help, Obama and Clinton refused to send available military assistance to the besieged Americans (this event is retold in the movie, 13 Hours at Benghazi). Some reports have stated that President Trump spoke with the Iraqi president about this attack. We do not know the specifics of what was said, but I think Trump made it clear that either the Iraqi authorities remove the attackers quickly or the US military would be ordered in with sufficient force to eliminate the attackers. Whatever was said, the attackers stopped their attack and retreated. However, the situation remains tense (sixth link).

There are important other factors in this attack. The seventh link makes the case that this attack could not have occurred at all unless the Iraqi government’s forces chose to turn a blind eye to the attack and refused to give the US embassy the protection that all governments are supposed to provide to foreign embassies. I think the Iraqi government now understands that if there is a new attack upon the US embassy, there will no phone call or warning shots–the US military will be coming in quickly with weapons “hot.” Also, the eighth link asserts that a person President Obama invited to the White House was one of the leaders of the attack! I think that speaks volumes about President Obama.

Does any of this have possible biblical ramifications? I think the answer is yes. Revelation 16 and 19 offer details about a great age-ending war that will trigger the return of Jesus Christ. These prophecies parallel Ezekiel 38-39 which offers details about a great age-ending war that will trigger divine intervention in mankind’s affairs. Ezekiel 38 prophesies that Russia, China and Iran will be allies in a Gog-Magog alliance that will attack the western world in that age-ending war. Revelation 16:12 adds the detail that a massive Asian army will attack westward from a jumping-off point in the Euphrates River region. In other words, they will attack from a launch point within modern Iraq. This strongly indicates that Iraq will be solidly aligned with the Gog-Magog alliance in the latter days when this climactic war begins. This means Iraq will be allied with Iran, not the USA, when this age comes to an end. Maybe it indicates we are drawing closer to the end of this age that Iraq is in the process of being drawn into the Iranian orbit even now. This also means that while the US military won two Persian Gulf Wars, foolish diplomats and politicians “lost the peace.” Since Iraq is primarily a Shiite Muslim nation like Iran, it is logical that Iraq would be aligned with Iran in the end.

However, Revelation 16 says nothing about “Iraq” or Iraq’s borders at the end of this age. Iraq is an unlikely union of Shiite and Sunni Muslims who are not at all friendly with each other. The Western Sunnis in Iraq are sympathetic with the Sunni alliance headed by Saudi Arabia. In the north of Iraq, the Kurds already have an autonomous region of their own and they may not be a part of Iraq at the end of this age. Many things (including borders) can change between now and the final World War III foretold by the Bible in many prophecies. But for the Gog-Magog alliance’s forces to mass in the region of modern Iraq clearly means the central government of Iraq in the Shiite region centered on the Euphrates River will be aligned with Iran. That these forces will attack westward means that they will attack directly toward the Israeli nation, which Iran is pledged to “wipe of the map.” They will not succeed. Revelation 16:16 calls the final battle “Armageddon” in the King James Version, which simply mean “Har Megiddo” (hill of Megiddo) in Hebrew. This designates the Jezreel Valley in central Israel as one primary battle site in this final war. Zechariah 14 also offers details about this final war and how God will rescue the Israelis by defending Jerusalem when it is at the point of falling.  Ezekiel 39:2 prophesies that the attacking Gog-Magog army will have 5/6ths of its soldiers killed in this final war. It also needs to be remembered that while Ezekiel 38-39, Revelation 16 and other prophecies offer details about the climactic World War III that will end our age, they do not preclude the possibility that regional wars between the power blocs or their proxies will erupt prior to the final conflagration. Each new battle in the Mideast brings the region closer to open warfare.

For convincing evidence that we are, indeed, living in the biblical latter days when these prophecies will be fulfilled, I invite you to read my article, Are We Living in the Biblical Latter Days? For a detailed examination of the many biblical prophecies about the great war at the end of this age, please read my article, What Ezekiel 38-39 Reveal about a Future World War III (Hint: It examines many more biblical prophecies than just Ezekiel 38-39).