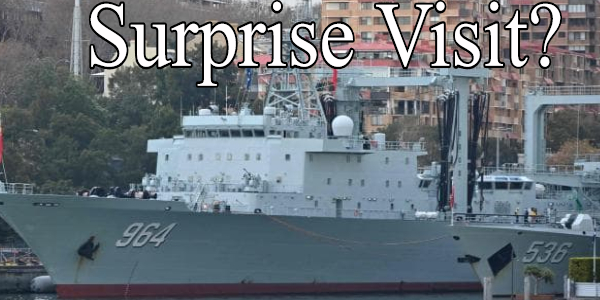 Something really shocking just happened in Australia, and I wanted readers to know about it. Three large, new warships of the Chinese navy sailed into Sydney harbor for a visit. The problem was no one knew they were coming except the local Chinese community. Can you imagine what it would be like if three Chinese warships sailed into San Diego Harbor or into Puget Sound and no one knew they were coming? To begin with, I think the USA has some serious defensive radars and detection systems which would alert everyone to the approach of such warships on the USA’s West Coast, but the arrival of the Chinese warships in Sydney’s harbor was a major surprise to everyone there. How could this happen? This event raises many very serious questions.

Recently re-elected Australian Prime Minister, Scott Morrison, tried to make the best of a very bad situation. He tried to reassure the nation that the arrival of these modern Chinese warships really, really was expected. A lot of people don’t believe him, as is clear from reading the news reports in the first three links. The first link states people were “shocked” to see the Chinese warships enter the harbor without any prior notice and that their arrival was a “huge surprise.” It also states the Chinese Navy was “sending a message to Australia” via the sudden arrival of three warships. That is surely a true statement, and let’s consider what kind of messages were sent to the Australian nation.

First let’s consider the Prime Minister’s very belated assertion that the visit really was expected. If so, why didn’t he or anyone else in the government tell the Australian public or media in advance? Why wasn’t the governor of the affected province advised of their expected arrival? When warships enter the harbor of another nation in an expected visit, there are usually flags on display, the media and public are alerted, fire-fighting harbor boats often greet such vessels with water sprayed high into the air from their hoses as a form of salute, and many dignitaries are on hand to receive the vessels. Government officials from the host nation are on hand in abundance to greet them. Apparently, none of this happened when the Chinese warships steamed into Sydney’s harbor. This argues very strongly that the visit was not expected by the Australian government, and that Prime Minister Morrison was in full “damage control mode” when he belatedly said they actually were expected. Right…and so why did he keep their arrival a state secret that was not shared with the public in advance? Something doesn’t pass the smell test here. If it had been expected, the Australian government would have put on a proper diplomatic reception and prior notifications to all.

The second link adds more vital information. It reports that as the most powerful flotilla of Communist Chinese warships entered Sydney’s harbor, Prime Minister Morrison wasn’t even planning to be in the nation of Australia. He was scheduled to visit the Solomon Islands…to rally support against Chinese encroachment in the region. Does it make any logical sense to you that the Australian Prime Minister would boycott and slight this important Chinese visit by being absent if he really did know they were coming? Again, this doesn’t ring true to me. It reports the Australian public was “shocked” and “jittery” at the sight of unexpected Chinese warships steaming into their harbor. The second link also has an embedded link detailing the fact that Australian pilots were attacked by lasers in a recent confrontation with Chinese warships in the South China Sea. It begs the question: Were these three warships the same Chinese warships that had a confrontation with the Australian navy just prior to their arrival in Sydney? Another question is begged: Since they were not expected by anyone in the harbor, what route did they take to reach Sydney? Did they travel via the principle maritime routes through Indonesian waterways and the Coral Sea or did they go through the Southern Indian Ocean and near to the Antarctic Ocean to reach Sydney in so unexpected a fashion? The latter route seems to be the correct answer because their approach to Sydney would have easily been seen if they had come through the heavily-traveled maritime waters of the Indonesian region and the Coral Sea. If this is true, China also sent a message to Australia (and the rest of the world) that it is developing a true “blue water” naval force. Did these Chinese warships observe radio silence during their entire approach to Australian waters to keep their presence a secret (as did the Japanese fleet that attacked Pearl Harbor in 1941)? If so, China also sent Australia a message that “we could have easily attacked you if we had wanted to do so; you are very vulnerable to military attack from China.” The third link reports Morrison said the Chinese warships were on a “reciprocal visit” to Australia on their way back to China from the Mideast. Please check your globe. You will see that Sydney, Australia is nowhere near any route from the Middle East to Chinese home ports. These Chinese warships went far out of their normal route back to China to appear unexpectedly in Sydney’s harbor!

The fourth link contains a video-clip from a local Australian TV channel about the unexpected visit. It includes the rather lame effort by Morrison to say, however belatedly, that the Australian government expected the arrival of these warships. Hmm. If the visit was expected, why was there a profound lack of any Australian vessels to greet these warships during their approach to the harbor and why was Morrison scheduled to be away from Australia during the visit (a point made by the TV station segment). Why was the national and local media not told of their arrival? Why was the Australian public told nothing about their arrival?

Indeed, if large Chinese warships had entered Sydney’s harbor with hostile intent, they could have launched a surprise attack by firing cruise missiles at all high-value military and civilian targets in Sydney, sent attack helicopters to strafe other targets and people at will and landed hundreds of Chinese soldiers to occupy the city center within a matter of minutes. China has sent a message to Australia that it is very vulnerable to a Chinese attack. Indeed, it sent it in a most brazen manner, and it may backfire against the Chinese. Australia will have to determine how their military didn’t detect the approach of the Chinese warships. Are Australian defenses really that bad? Or were the Chinese vessels employing a new stealth capacity that evaded detection until they were within visual range? Some hard questions need to be asked. Australia clearly needs to beef up its military defenses. Also, every nation in the Indo-Pacific region just witnessed what happened, and this act will put all such nations on a higher defensive alert status to detect and monitor Chinese warships with far more scrutiny than before this incident.

Oh yes. There was one more “message” that the Chinese sent to Australia. The media reports noted that many Chinese nationals in Sydney knew the Chinese warships were coming as they were there to greet the ships in the harbor. How did they know about the visit in advance when no Australian government or media source had told them about it? This reveals that China has an intelligence network inside Australia that can rally and organize Chinese nationals inside the nation in a way that was previously unknown to Australasian authorities. This means Chinese nationals in all nations will also need greater scrutiny not just in Australia but everywhere they are present in other nations. Surely the same kind of sub rosa intelligence network exists in every nation with Chinese nationals present–not just in Australia.

For knowledgeable students of biblical prophecy, this incident has much meaning. Ezekiel 38-39 forewarn us that an attack by China against Australia is not only possible but certain. The attack will also be against the USA, Canada, New Zealand, the United Kingdom and their NATO and Pacific allies as well. Ezekiel 38-39 prophesy that the nations of a Gog-Magog alliance (Russia, China, Iran and their allies) will launch a surprise attack against the western world’s nations to begin an age-ending World War III. The target of the Gog-Magog alliance’s attack is identified in Ezekiel 38-39 as the people and lands of “Israel” or the “house of Israel” (Ezekiel 39:22-23, 25 and 29). Modern Christians, whose knowledge of the Bible is very thin, indeed, assume this means this alliance will attack just the Jewish state in the Mideast…while apparently the rest of us will watch it all on cable-TV news channels. In fact, the Israelis are not even discussed in Ezekiel 38-39. If they were, this prophecy would have used the term “Judah,” which is the biblical term for the Jews/Israelis. The term “Israel” or “house of Israel”  refers to the latter-day descendants of the ten tribes of Israel, which, as readers of my books realize, refers to the modern NATO nations and their global allies. The term “Israel” is most specifically placed on the Israelite tribes of Ephraim and Manasseh which descended from the biblical person, Joseph.  Jacob, Joseph’s father, was renamed “Israel” by God and he said that his new name of “Israel” would be placed particularly on the tribes of Ephraim and Manasseh (Genesis 48:14-16). Genesis 49:16-20 reveal these two tribes would be brother nations who would become a “multitude” in the latter days (Genesis 49;10), and that Ephraim would become a multitude or group of nations while Manasseh would be a single great nation. That they would be “brother” nations in the world means they will have the same culture and language. The name “Isaac” was also to be placed on these two tribes (Genesis 48:16), and history records that that prophecy has been kept to this day. The Israelites, after their exile into Asia, were known as the “Sac-ae” by the Greeks and as the “Sak-a” by the Persians. The Romans later called these same people the “Saxons.” It is known to all who the Anglo-Saxon nations are in the world today.

The arrival of large Chinese warships in Sydney’s harbor is a harbinger of what will come to many cities and nations when Ezekiel  38-39 is fulfilled. It serves as a warning to many nations that they better get serious about their military preparations to defend against a combined Russian-Chinese-Iranian attack in the years ahead of us. For those desiring more in-depth information about the topics discussed above, please read my free articles, What Ezekiel 38-39 Reveal about a Future World War III,  Are We Living in the Biblical Latter Days? and The USA in Biblical Prophecy. Those who think the USA is not mentioned in biblical prophecies have some serious misunderstandings about the Bible’s prophecies and their terminologies. Those wishing to see the abundant historical proof that the ten tribes of Israel can be identified in the modern world are invited to obtain copies of my books on this subject at the home page of this website.