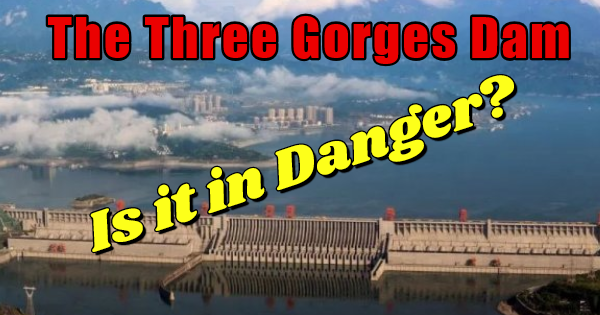 Far from the general awareness of the world’s masses, a major crisis is occurring inside China which threatens some of its major cities, a massive portion of its infrastructure, and a large part of China’s food production capability. China has been plagued with what some refer to as “biblical” levels of rainstorms that have swollen the Yangtze River (and many other rivers) to flood stages not seen in many years (or decades). What is particularly dangerous is that this massive amount of water is piling up in the huge reservoir held back by China’s Three Gorges Dam. There are now reports that the Three Gorges Dam is “deforming” (to cite the least-threatening reported terminology) or “buckling” (to use the most-threatening reported terminology) under the strain.

Chinese authorities have sought to play down the dangers, but they do admit this massive dam is now “deforming” under the strain of holding so much water back in its reservoir. Link one, link two, link three and link four offer varying perspectives on the extent of actual or potential damage to the Three Gorges Dam if the rainstorms continue. Some are now even daring to warn that China’s huge dam is in danger of collapsing. Two of the huge cities that are in danger of being inundated if the dam collapses are Wuhan and Shanghai. Yes, this is the same “Wuhan” where the current virus pandemic began and from where it spread via air travel and global commerce to the entire world. Indeed, I think I can suggest that if Wuhan, after being the source of so much global suffering and death due to the pandemic, is itself inundated by gargantuan floods from the dam’s failure, many people in the world might regard it as poetic justice.

Some of the links include satellite photos of the dam as it appears now and as it appeared before the monsoon storms. A comparison of these photos clearly show portions of the Three Gorges Dam are deforming due to the unprecedented amount of water being held in its reservoir. Chinese sources are saying that there is no danger and that the dam cannot fail. Would Communist Chinese authorities lie? I think we all know the answer to that question by now. Indeed, the second link (a video news clip) reports that a scientific examination of the dam found design flaws in it that could cause its collapse. By the time the flaws were found, it was too late to correct them. It also cites one expert who warned the Three Gorges Dam was “in danger of collapse,” and that the reservoir behind the dam was now already six feet above its recommended safety level with more rains expected. It also reports that a breach of the dam would endanger 400,000,000 people downstream. China is doing all it can to make sure the dam survives, but how much more strain can it handle when its structure is already beginning to visibly deform?

Perhaps some readers may think: “Why does this affect me? How could a dam collapsing in China affect my life? It could actually affect your life more than you realize. Consider how many products bear the label “Made in China.” Many of the factories that make all kinds of consumer products, electronics, automobiles, etc. for the global market are located in Wuhan and the region downstream from the dam. Many of those factories could be destroyed or damaged for a long period of time if the dam bursts. Indeed, many products, even if not fully made in the Wuhan region, have components manufactured in the flood-endangered region that, if shut down, will  shut down assembly lines in other nations if supply-chain items can no longer be made in Chinese factories that would be wiped out if the dam bursts. Indeed, a post at this website (fifth link) months ago warned that many of the pharmaceuticals used in America and western nations are made or formulated in China. How many common medicines used by millions of people throughout the world will suddenly be in very short supply if Chinese factories making those medicines are shut down by a mega-flood if the Three Gorges Dam fails? Given the almost universal use of prescription or over-the-counter drugs by virtually everyone in the civilized world, it is a safe bet that most of the people reading this post are taking medicines made in China…in factories located downstream from the Three Gorges Dam. You can see now how people all over the world will be quickly affected in a negative way if this huge Chinese dam bursts.

The weakening Three Gorges Dam also has geopolitical ramifications. In various posts over the years, I have pointed out that the Three Gorges Dam would be an obvious high-value target for any nation with whom China goes to war. In a large regional or global war, this mighty dam would have almost no chance of survival. The damage to China from its collapse (either by natural causes or military attacks) would be catastrophic. Breaching the dam would cause almost incalculable damage to China’s commercial, industrial, electrical, agricultural, and military sectors. I’m sure that the military planners of various nations have already calculated how many Chinese military bases and production facilities could be destroyed or disabled by the failure of this one dam. Indeed, if this dam was breached and a freshwater tsunami/flood traveled all the way from the dam down the Yangtze basin to the Pacific Ocean, could China even continue a war given the havoc that would ensue if the dam was destroyed? I suspect the destruction of that dam would be the Number One goal of many nations’ military forces if China goes to war against anyone.

It is already known war planners in one nation have studied how China could be devastated in a war by the destruction of this one dam. The sixth link cites a Taiwanese planner who asserts that it would only take two missiles to breach the Three Gorges Dam. Obviously, extensive studies have been done in many nations’ war departments to determine what portions of the Three Gorges Dam are most vulnerable to causing a breach if hit by missiles or bombs. In a real war, many missiles and bombs would be dedicated to destroying this great Chinese dam. I’m not a military planner and I’m certainly no engineer, but the fact that the Three Gorges Dam is already beginning to “deform” structurally just from natural forces indicates that this dam may be easier to breach than most people thought possible. War planners will already be doing exhaustive studies to examine the satellite photos of the dam’s deformation and calculate where the most vulnerable part of the dam is now located so all missiles would target that area. While the Three Gorges Dam is China’s primary dam, China also has other large dams that supply water, electric power, etc. to Chinese industries of all kinds. You can be sure every Chinese dam of any meaningful size has already been carefully evaluated by rival military experts to determine each dam’s weakest point and the value of downstream damage that would be done if a series of dams were destroyed all over China. Dams whose destruction would knock out the most Chinese military bases, airfields, military production factories, etc. would likely be the first dams attacked in any major war. If China loses a regional war because the destruction of many of its dams cause much of China’s productive land and industry to be destroyed or damaged (and millions of its people killed), China will be furious and thirsting for revenge. World War III will be inevitable when China recovers enough to wage such a war. Taiwan apparently already thinks two missiles can breach the Three Gorges Dam. If China invades Taiwan, a lot more than two missiles will be fired at the Three Gorges Dam.

We live in “perilous times” as the Apostle Paul warned would be the case in the latter days of our age (II Timothy 3:1). What most people do not realize is World War III is, a certainty. In the Bible, a very-detailed prophecy in Ezekiel 38-39 has already foretold the alliances that will fight in this age-ending global war as well as how it will start, the casualties that will be suffered and who will win that final war of our age. If knowing the answers to those questions interests you, I invite you to read my in-depth article, What Ezekiel 38-39 Reveals about a Future World War III. This article also analyzes Ezekiel 38-39 in light of the content of many other parallel biblical prophecies about the latter days and the final war of our age. Other valuable related articles to read include: Are We Living in the Latter Days? The USA in Bible Prophecy, and Japan’s Role in Prophecy.