CHINA’S PLAN TO GRAB A MAJOR BASE NEAR AUSTRALIA THWARTED 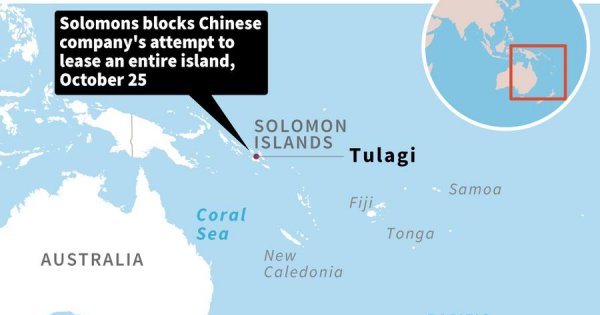 A few days ago, I wrote a piece entitled, China Seeks to Seize Control of Strategic Pacific Island, which warned that China was using a back-door way of acquiring rights to an entire island (Tulagi) in the Solomon Islands that had a deep water port–ideal for a Chinese naval base. That base would have threatened all naval and air ties between the USA and its allies in Australia and New Zealand. China saw the strategic importance of that island and followed the very same strategy used by Imperial Japan in World War II to jeopardize the ability of the USA to reinforce Australia and New Zealand during any future war.

Thankfully, this attempt by China has been thwarted. China had signed a “strategic cooperation agreement” with a regional government in the Solomon Islands, but the national government of the Solomon Islands vetoed the deal (first link). The title of that preliminary document, a “strategic cooperation agreement (emphasis added),” strongly hints that China would have turned Tulagi into a Chinese military naval and air base in a short time even as it quickly militarized the artificial islands it created in the South China Sea. The second link and third link offer additional discussions found in major world media regarding this thwarting of China’s power grab.

While the entire western world can be relieved that this power grab by China was thwarted, it begs the question of how such a “close call” could have occurred at all. Obviously, the possibility that China used bribes or other inducements to convince the regional authorities in the Solomon Islands to sign an agreement that would have been a major betrayal of the western world needs to be investigated. I’m sure this close call will motivate western governments to ensure it does not happen again in other Pacific Island chains. It is also possible the regional authorities were just naive and inexperienced, making them a prime target for Chinese manipulation. I’ll offer my opinion concerning how this Chinese plot was intended to unfold. Having served in governments as a staff member in city and regional governments in my younger days, I realize governing bodies (whether they are city councils, boards, commissions, etc,) have what is often termed a “consent agenda” as a routine order of their business meetings. This consent agenda is a listing of items that are uncontroversial or routine matters and need not take up the time of the governing body. Such items include scheduled license and permit renewals, minor change orders to on-going contracts, code variances, minor personnel matters, etc. These items are supposed to be vetted by someone in authority who can evaluate and determine whether items really are insignificant enough to be on a consent agenda. It is possible the various regional governments of the Solomon Islands routinely transmit “consent agenda” items to the national government of the Solomon Islands for routine approval during federal official meetings. I think China deliberately tried to create a far-reaching agreement with a regional government in the Solomon Islands in the hopes that it would be “buried” in a consent agenda and approved without any notice or proper vetting by the national government. Thankfully, someone “blew the whistle” about how important this matter really was and China’s power-grab was stopped.

Given China’s brazen effort to effectively “steal” control of a strategic island base that would have directly threatened Australia and New Zealand, I hope western governments all over the region closely inspect the internal administrative processes of all Pacific governments to make sure they do not “accidentally” yield China control over strategic pieces of their own territories. This abortive power grab by China makes it abundantly clear China is planning various steps to spread its political/military control over strategic portions of the Indo-Pacific region. China has no intention of “fighting fair” in any future war; it intends to fight to win by whatever means possible.

Will there be a future World War III? The march of history and the increasingly bellicose nature of China’s policies should cause everyone to see the answer to that question is “yes.” Even as Hitler’s Germany built a large military in the 1930s so it could go to war against many nations, China’s actions are eerily similar to that of Nazi Germany in the 1930s. China is building a huge military force because it intends to use it someday when it feels the time is right to unleash a new war. Also, biblical prophecies affirm that a global World War III is going to happen; however, those prophecies do not give us any specific date for it to begin. Ezekiel 38-39 foretold, in very specific detail, the military alliances that now exist in the modern world. That prophecy also foretells how the final global war of our age will start, who will attack whom, the motive for the war, a casualty projection of the attacking alliance and the outcome of that war. Russia, China, and Iran were foretold to be in one alliance, and the western world and its global allies were foretold to be in the other alliance. The prophecy is amazingly clear in its specificity when one historically connects the names of the ancient peoples with their modern descendant nations. Ezekiel 38-39 foretells this global war will conclude our current age in a time called “the latter days” (Ezekiel 38:8 and 16). There is abundant proof that the Bible’s many prophecies about the latter days are being fulfilled in our time, and this evidence is presented in my article, Are We Living in the Biblical Latter Days? Several biblical prophecies also address the details of the final World War III which will erupt on our planet just before divine intervention in mankind’s affairs. You can read what these biblical prophecies have foretold in my article, What Ezekiel 38-39 Reveal about a Future World War III. That the Bible’s prophecies are uncannily accurate both concerning latter-day prophecies and the alignment of the modern world’s major alliances ought to cause us to give heed to what it foretells will befall our planet sometime in our foreseeable future.