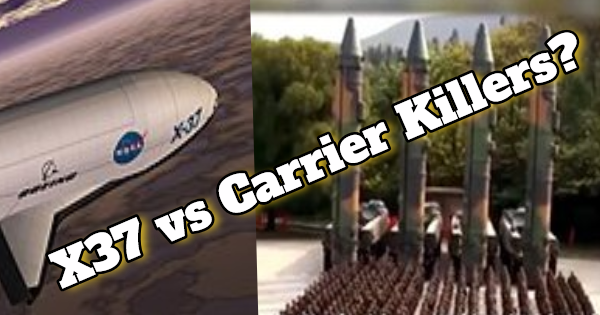 Readers are, no doubt, very familiar with the rising tensions between China on one side and the USA and its allies on the other side. Trade war issues and potential military conflict are at the top of the list of tensions between these power blocs. While I have often written about the geopolitical trends which are pushing China and the USA and its allies toward a war which could start in the South China Sea or Korean Peninsula and spread to a wider theater of operations, this post is intended to focus on two new weapons systems–one possessed by each side.

Let’s look at the new Chinese weapons system first. China has had ballistic missile systems that can be targeted at US carriers for years, but it has announced that it has developed a new ballistic missile that is specifically called “a carrier killer.” Obviously, this ballistic missile has been developed to sink US aircraft carriers (or carriers in the fleets of India, Japan, France, etc.). China tested this new missile, called the DF-21D, on a flight path that included the contested South China Sea. This is a bellicose message from China that this missile could be used against carriers in that body of international water through which a high percentage of global shipping passes annually. The first link states the missile could “cripple” a carrier. Let’s be honest. It could sink a carrier depending on where it hits it. The second link includes a photograph of a package of ten of these new Chinese missiles and makes a classic understatement: that ten of these missiles could cause “serious damage” to a carrier. Again, let’s be candid. I doubt that any carrier could survive being hit by even half that number of ballistic missiles. Also, the authors of these links are assuming China would only use conventional warheads on these missiles. I’m sure that they are nuclear-capable, and in an all-out war, the warheads would include nuclear payloads. Obviously, it is critically important that the US Navy has defensive weapons in place which can defend carriers (and all surface ships) against these missiles.

It has long been my view that in a regional or all-out war if China fires at/hits US carriers, the USA will launch ballistic missiles at the Three Gorges Dam in China. Its massive reservoir holds back so much freshwater that if the dam was breached by missile impacts, it would send an unbelievably damaging fresh-water tsunami all the way from the dam to the Pacific Ocean. This would cause untold numbers of deaths and destruction to both civilian and military targets. Entire cities may be drowned and vast tracts of farmland would be unusable. In an all-out war, the US (or its allies) would also have nuclear warheads on their missiles aimed at this dam and the water in its reservoirs would become a radioactive tsunami sweeping through Southeast China. A vast region of China could become uninhabitable and incapable of growing safe crops to eat for decades. When diplomats and top military officials meet behind closed doors, I’m sure these realities are discussed as a way to deter any such war from occurring.

The third link asserts China’s new missile is maneuverable and that it can fly “thousands of miles.” This would also put US bases in Guam, Japan, and other locations within range of these missiles. The US Navy counters with a claim that it has over three dozen surface ships that have defensive missiles which can intercept the Chinese ballistic missiles. Of course, in a war situation, each side would be trying to “jam” the enemy’s weapons systems so their electronic brains cannot function correctly. That the US fleet includes cruisers and destroyers that carry such interceptor missiles, it creates a situation where Chinese cruise missiles fired from airplanes or submarines could begin a surprise attack by seeking to sink first the carrier’s escort vessels to strip the carrier of its protective screening vessels and then attack the carrier after its escort vessels were sunk. I do hope our US Navy planners have put interceptor missiles on carriers so they can also defend themselves. That’s an obvious need, but war planners often don’t consider the future’s threats and needs when keels are laid down for new carriers.

Now let’s consider the new US weapons system, about which the USA is revealing very little. It is the X-37B space plane, which looks like a downsized version of America’s Space Shuttles. With no manned crew, there is no need for crew compartments, food and water, air and the many supplies needed for a human crew. It can stay aloft for many months and its space missions so far indicate that it may be able to stay in orbit for years at a time. There is much speculation about what its true mission is or what its real capabilities are, but the US Defense Department isn’t revealing its secrets (a wise policy). The fourth link and fifth link detail the speculative options that military observers have put forth for its mission(s). It may be a satellite-killer, a satellite-replacement vessel or a reconnaissance space-plane. I would like to suggest a more forceful mission. The X-37B was developed as an entirely military project, so its purpose is entirely military. I have little doubt it was built with both offensive and defensive capabilities in mind. The sixth link reveals that the X-37B is not confined to any fixed orbit; it can move to a different orbital path as directed, making it harder to target. Since this space plane is at the edge of the earth’s atmosphere or in a low-space orbit, it would be ideal as a ballistic missile killer. If it has a laser or other kind of weapons on board to hit ballistic missiles while they are near the X-37B’s altitude, the X-37B could destroy or deflect ballistic missiles fired at the US or allied targets. Indeed, if it simply has a high-powered, focused microwave generator in its bay, it could aim a microwave beam at any missile or satellite and “fry” its electronics.

I thought of another possible use for the X-37B. When we think of missiles or warheads, we think of them having large rocket boosters to propel them to high speeds to attack their targets. That is a necessity because they are fired from the earth’s surface. I admit that I am not a physicist or mathematician to know if the following possibility is feasible or not. Some “rocket scientists” among my readers may be able to calculate the answers. If a warhead is fired from the X-37B and aimed at a specific ground target, to what speed would the earth’s atmosphere accelerate the warhead from the initial altitude of the X-37B? Would a warhead accelerate to supersonic or hypersonic speed? It would also be small enough to make it hard to detect. If aimed at targets on earth, warheads released from the X-37B could destroy a wide range of hard targets on the earth’s surface. It also would be wise to make them functional without a reliance on the GPS system which could be knocked out in the early phase of any regional or world war. Warheads released from an X-37B could have optical guidance systems. At its orbital height, anywhere on earth can be targeted. A warhead’s optical guidance system could easily be fitted with a “zoom” function to keep the target in the sights of the falling warhead as it falls to ensure it hit its target. Calculations about any such system would need to know the mass of the warheads, the initial speed at which they were fired, etc.

The X-37B was developed with DARPA-Pentagon guidance so it was funded with limitless “black-ops” money so I’m sure it has the latest cutting-edge, military technology on it. The seventh link is a Wikipedia description of what is known about the X-37B program. There is an interesting comment toward the end of the article. It tells readers to “See Also” a series of related links, including one entitled “hypersonic missile delivery and satellite-launch project.” My previous paragraph proposed a possible hypersonic warhead delivery system for the X-37B. Wikipedia has a link discussing that same capability in its article about the X-37B. Hmm. It also should be remembered that President Trump has proposed a new “Space Command” as one of the permanent branches of the US military. Why would this be proposed unless the USA now has sufficient offensive and defensive space capabilities to merit such an operational force?

One final thought: In announcing the capabilities of its new ballistic missile, China is acting like a nation seeking to establish a credible deterrent position. In not saying much of anything about the X-37B, the USA is acting like a nation which already has an established deterrent capability so it does not need to “tip its hand” about any of its new weapons systems coming on-line.

Not many people on the earth realize that the Bible contains an approximately 2,500-year-old prophecy that accurately predicted the modern global alliances and it also foretells not only that there will be a climactic World War III, but it also reveals how the war will start, why it will begin, some tactical information about how it will be fought and how World War III will end. The casualty figures for one alliance is included in the prophecy, and it will shock you how high the death toll will be. To examine this prophecy (and others that parallel it) in-depth, please read my free articles, Are We Living in the Biblical Latter Days?, What Ezekiel 38-39 Reveals about a Future World War III, The USA in Bible Prophecy and Japan’s Role in Biblical Prophecy. If you review these articles, you will see the inevitable conclusion that those who think the Bible is an irrelevant book could hardly be more wrong.