CHINA’S NAVY EXPANDS, SO WHO IS TRYING TO REDUCE THE US NAVY? 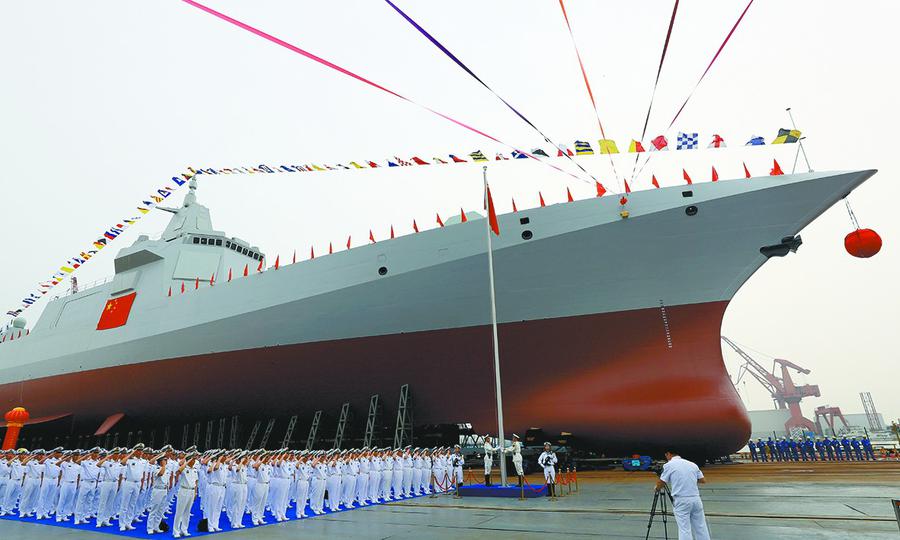 There have been many media articles for years documenting the rapid growth of the Chinese military’s new high-tech weaponry. This includes a rapid increase in the number of Chinese warships of all types (aircraft carriers, surface warships, submarines, etc.).  The Chinese navy has little experience in operating carriers or conducting large-scale oceanic naval operations so it will take them time to acquire the skills the US Navy has long had in such naval operations; however, China’s expansion of its navy is impressive and is clearly aimed at engaging and defeating the US Navy in combat.

The first link describes a new class of surface warship that China is building. While it is called a destroyer, its 10,000 ton size qualifies it to be called a cruiser and it features 112 missile-firing cells which can fire a variety of missiles dedicated to different missions. The first such ship is entering service with the Chinese navy, but more will be added in future years. China continues to build many submarines and is adding aircraft carriers as well.

The US Navy is formidable, and has the world’s largest number of aircraft carriers…by far. However, both Russia and China have built supersonic cruise missiles and new classes of ballistic missiles designed to sink US carriers, and it is not known how many upgrades have been made to US carriers to defeat those threats. Clearly, the US Navy has to build modern warships to match not only the growing Chinese fleet, but the Russian Navy as well. President Trump favors a plan to increase the US Navy to consist of 355 ships, but another study asserts the US will need a 400-ship navy to be able to fight a two-ocean war in the future (second link). That seems logical to me, and I recall that during the Reagan administration, President Reagan wanted a 600 ship navy when the Cold War was still in existence.

So, who could want to reduce the US Navy so it will be more vulnerable to its rivals in a future war? Amazingly, there are forces within the USA and the Pentagon who want to weaken the US Navy. There are plans circulating within the US government to actually reduce the size of the US Navy. One plan would decommission 12 warships and de-fund another 12 ships scheduled to be built (third link), while another plan would steadily reduce the number of Ticonderoga-class cruisers in the naval budgets for the next few years (fourth link). These plans to remove vital warships from the active-duty fleet seem asinine to me, and the very existence of such plans indicate that there are forces within the US government and military that are fighting President Trump’s plan to strengthen the US Navy. The importance of the Ticonderoga-class cruisers, which are essential to protecting US carriers, are detailed in the fifth link. It gets worse. The sixth link reports that the Navy has a plan to decommission four new Littoral Combat ships, 3 dock-landing ships and 4 cruisers a well as slashing the construction of new destroyers. I do think the question has to be asked: given the rapid increase in China’s warships, who is proposing to decrease the size of the US Navy and why are they proposing such self-defeating plans? Whose side are they on and who are these unnamed gnomes (Deep State operatives?) who are trying to weaken the US Navy? Another piece of bad news is that the new US super-carrier, the USS Gerald Ford, is still having problems becoming operational (seventh link).

There are some pieces of good news. One submarine support ship has been upgraded and will soon be activated back into the active-duty fleet (eighth link). There are also forces attempting to put back on track the plan to increase the US Navy to 355 warships and the ninth link describes this plan as well as some of the budgetary obstacles to making it happen. The tenth link outlines an ongoing plan to upgrade the electronics of the Arleigh-Burke class destroyers.

I find it discouraging that there are forces inside the US government that are trying to weaken the US Navy when the fleet clearly needs to be increased and upgraded to be able to defeat the increased and improving Chinese navy as well as the Russian navy in any future war. Losing a global war is not an option, so the money has to be found to protect the USA and deter a major war. That is a priority that must supersede all other priorities. However, with so many competing spending plans before the Congress, how will the money be found to increase the US navy’s size? One problem the USA faces is that while the US dockyards and ship-building firms must pay a union-scale or prevailing wage to their workers, the Chinese have no such limitation. If Chinese workers refuse to work or go on strike, they could be shot or sent to re-education camps…or worse. The fact is China can build a lot more ships for an equal amount of money than can the US Navy. One solution is to reactivate warships in the US Reserve Fleet that have hulls with many years of service time left in them but which were removed from the active duty fleet due to budgetary considerations or presidents who wanted to cut the military to fund social programs. President Clinton cut a large number of fully-functional warships from the US fleet during his presidency, and other more-recent presidents have done the same thing. It is far easier, quicker and cheaper to put capable reserve warships back into service that already have been built than to start building new warships from the keel up. This option should be pursued vigorously.

There is another problem in expanding the fleet that these links do not discuss. If you increase the number of warships, where do you get the many new trained sailors to serve in them? One has to either spend a lot of money recruiting them with high signing bonuses (which bloats the military budget) or reinstitute the draft to obtain the necessary number of sailors. The former proposal costs too much money but is more popular in Congress. The latter proposal makes far more financial sense, but would be hard to implement through Congress.

I’d like to point out one weakness in the US fleet which I think needs to be addressed as soon as possible. While the US Navy has cruisers and destroyers, they are mainly armed and purposed with defensive weaponry to protect the US carriers. The US Navy has few, if any, warships whose primary purpose is to carry the war to an enemy with offensive weaponry. The US Navy needs warships that are equipped, like the new Chinese cruiser/destroyer, with a large number of missile-launching tubes dedicated to launching large numbers of long-range cruise missiles with more powerful warheads than the USA now has. The US Navy has ships that fire Tomahawk cruise missiles, but they are a relatively obsolescent weapon system with a shorter range, slow speed and small warheads. In one raid, President Trump had US warships fire dozens of them at a Syrian air base, and the Tomahawks did little damage as that base was operational again in a short time. We need significant numbers of warships that carry offensive supersonic and hypersonic cruise missiles which are tasked to conduct offensive operations vs. enemy targets and operate apart from US aircraft carriers. I doubt it would be that hard to reactivate warships from the reserve fleet and retrofit them with such new weaponry to perform that function.

I do hope that the military force of the USA is fully upgraded and increased to fight two major wars at once. Given that the Chinese and Russian militaries are being increased to fight and defeat the US military, the need to strengthen the US military should be obvious. The Bible also has detailed prophecies that warn the USA and its NATO and global allies will be hit, in some future year, by a surprise attack against their forces by the combined militaries of Russia, China, Iran and their other allies (such as North Korea). These prophecies will be fulfilled in a time called “the latter days” in the Bible, and it is not difficult to see that these prophecies are describing our modern times. For abundant evidence confirming that assertion, please read my article, Are We Living in the Biblical Latter Days? The Russian-Chinese led alliance versus the western world is described in detail in Ezekiel 38-39, and many other biblical prophecies reveal more details about how this age-ending global war will begin, unfold and end. All of these prophecies are examined in my article, What Ezekiel 38-39 Reveal about a Future World War III. If you read these two articles, you will see how uncannily accurate these ancient biblical prophecies really are. That prophecies written millennia ago are coming to pass in detail in modern geopolitical events can only mean that they were inspired by a Creator God who has the power to make sure they are fulfilled on his timetable.

Based on how rapidly biblical prophecies are being fulfilled, there may not be a lot of time to prepare for that prophesied attack vs. the western world. I don’t “set dates,” but I think American and allied war-planners need a sense of urgency about preparing their military forces to meet an all-out, global, Pearl Harbor-like surprise attack from Russia, China and their allies. So far, I don’t see that needed sense of urgency present anywhere in the western world. What I see is too much complacency, and complacency will encourage and hasten that future attack, not deter it.