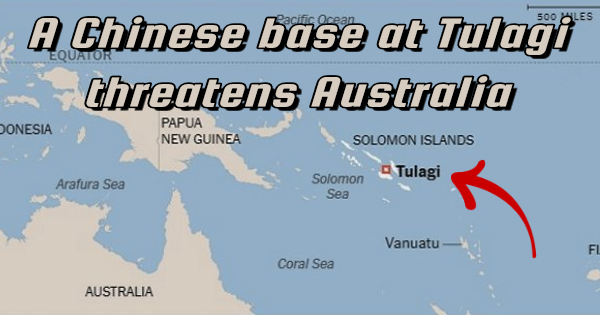 While the world’s mainstream media is obsessed with several other stories, China is quietly seeking to expand its power base throughout the Pacific region. China has, as readers surely know, been rapidly expanding its military forces to be able to compete with the military of the USA and its allies for dominance of the entire Indo-Pacific region. China has built its own aircraft carriers and has built several artificial islands in the South China Sea and quickly militarized them. It has built a huge seaport and airport at Gwadar, Pakistan to control access to the Persian Gulf and to outflank India from the west. It has sold Cambodia two new Chinese submarines (first link) and is building a port to service them in Cambodia (this port will also then be able to service Chinese subs and perhaps surface warships as well).

It has recently been discovered that China has been attempting to seize control of an entire island in the Solomon Islands chain. It is Tulagi Island, which is just across a small body of water from Guadalcanal (second link), on which US forces fought a fierce battle in World War II to stop the forces of Imperial Japan from building an airbase which could interdict merchant shipping between the USA and Australia. If Japan had succeeded at that effort, it would have seriously jeopardized the security of Australia and New Zealand in World War II. China clearly has the same goal as Japan had in World War II. The remaining links offer varying perspectives on China’s attempt to obtain full rights to control the island of Tulagi, which has a deep-water port that can service and base China’s surface warships. Given that China quickly put airfields, military dock facilities, missiles, etc. on its artificial islands in the South China Sea, one can assume that China will do the same thing with the island of Tulagi if it gains control of it. The third link discusses the obvious threat this would pose to Australia and New Zealand. The fourth link points out that the agreement signed by China regarding Tulagi was negotiated with a regional island government, not the central government of the Solomon Islands nation. This means the agreement is not final unless the Solomon Islands’ national government approves this deal. No doubt great pressure will be placed on the Solomon Islands government to not approve this deal.

The fifth link and sixth link add additional perspectives on this Chinese effort to seize control of Tulagi, a strategic island to the northeast of Australia. The links also discuss the fact that the Solomon Islands withdrew its recognition of Taiwan as an independent nation and switched its diplomatic recognition to Communist China alone. China’s long-term plan is to absorb Taiwan into Communist China, either by diplomatic osmosis or outright military force. As the number of nations recognizing Taiwan is reduced, it strengthens China’s leverage against Taiwan. China is surely hoping for a leftist/globalist president to be elected in the USA so China could invade Taiwan without fear of starting a war with the USA.

People tend to forget that China, is a huge and powerful nation, which is governed completely by the Communist party. All commercial and financial entities in China must coordinate their efforts with the central government of China and the PLA (People’s Liberation Army). One can be assured that all overseas efforts by Chinese companies, including those participating in China’s Belt and Road trade network, are subsidiaries of the overall effort of China to pursue world domination. Make no mistake about it; China is determined to so build-up, its military power so that it can challenge and defeat the USA (and everyone else) in a war. The effort by China to surreptitiously take over a strategic island in the South Pacific’s Solomon Island chain is a cog in its overall plan to defeat the USA and its allies. A large Chinese base at Tulagi would allow China the ability to harass and destroy surface ships and airplanes traveling between the USA and Australia in any future war. This act should compel Australia and New Zealand to beef up their military forces as this move by China makes it clear China intends to isolate and encircle their nations. It should also be a warning to the USA that its diplomatic and intelligence personnel need to pay much closer attention to China’s efforts to establish military bases far from its own shores deep into the Pacific Ocean.

I would love to offer readers some hope that a future World War III can be averted, but I cannot do so. Indeed, the biblical prophecy in Ezekiel 38-39 assures us that a future World War III is destined to occur. China is very clearly taking steps to prepare for this future war. Ezekiel 38:1-11 foretells the nations of Russia, China, Iran, and their allies will launch an unexpected sudden attack upon the nations of the western world at some point in the future. This attack is prophesied in Ezekiel 38:8 and 16 to occur in a period of prophetic time called “the latter days” (or “latter years”). The biblical term “Israel” in this prophecy identifies the modern nations descended from the former ten tribes of Israel, not the modern Jewish nation by that same name. The Bible consistently refers to the Jews/Israelis in the latter days by the term “Judah” (Zephaniah 2, Zechariah 12 and 14), not “Israel.”  Please read my free article,  Are We Living in the Biblical Latter Days? for abundant proof that we are living in that prophesied time.  If you are unfamiliar with biblical prophecies about the time that will mark the end of our current age, you will be surprised at how accurately the Bible’s ancient prophecies foretold specific details about our modern world.

My free article, The United States of America in Biblical Prophecy, offers some of the primary evidence about the Bible’s prophecies concerning the USA and its role in the latter-day period of time. Does it surprise you that the Bible has several prophecies about the USA that are being fulfilled in our modern world? It should surprise no one. The God of the Bible wouldn’t be much of a God if he made prophesies about our modern time and failed to foresee or mention the USA, a modern superpower.  My article identifies the biblical prophecies about the USA and applies them to both our modern world and the years ahead of us. This article barely “scratches the surface” of what the Bible has to say about the origins and modern role of the USA (and many other western nations). For the full background of biblical evidence about these nations’ history and modern locations, I strongly suggest you obtain copies, of my comprehensive 4-book set, on the history of the ten tribes of Israel, or my E-book, The “Lost” Ten Tribes of Israel…Found! (all available at the home page of my website, stevenmcollins.com). For a detailed examination of the Bible’s prophecies about how World War III will start, the theaters of its main battlegrounds and how it will end, please read my free article, What Ezekiel 38-39 Reveals about a Future World War III. That article examines far more biblical prophecies than just this pivotal latter-day prophecy in Ezekiel. If you read this article, you will see just how much the Creator God foretold about the events of the years ahead of us and just how accurate the Bible’s largely-ignored prophecies really are!