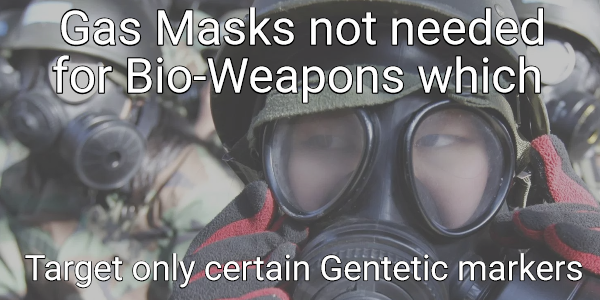 This post is on a topic which should receive far more attention than it is getting in the media. It involves a truly apocalyptic possibility. A recent report states that China is developing a DNA-based biological weapon that is a doomsday weapon in every sense of the word. It reports that China is gathering DNA information about everyone in its own nation and as much DNA information about people in other nations as it can obtain. The goal of this project? To create a DNA-based “bomb” which could target everyone for extinction in a given DNA grouping. To be specific, the first link states China is exploring ways to develop “biological weapons which kill or irreparably harm selected nationalities.” It offers an example that such a Chinese weapon could be targeted at Japan and that it would “kill or irreparably harm” everyone with distinctly Japanese DNA in their bodies but would do no harm to people with distinctly Chinese DNA. Such a weapon would need to utilize nano-technology to create a weapon that is so sophisticated that it can kill or harm people by “recognizing” them at their cellular level before unleashing an infectious or disabling poison that can “kill or irreparably harm” any targeted population.

To build such a weapon, China needs to build a huge DNA database of the global population groups to enable it to specifically identify the essential DNA common denominators (and differences) in all racial and ethnic groups so a “bomb” can be built that can selectively target groups to be eliminated (or spared). In the western world, there are various companies which offer to analyze your DNA so you can identify your true ethnic origins. Millions of individuals have surely contributed their DNA to these DNA inventorying companies that advertise on the television quite a lot. Given the widespread media stories about the Chinese hacking of all computer databases with any strategic, military or economic interest to them, they have surely hacked into the databases of all companies that harvest DNA information. Doing so will enable them to build a more accurate and selective DNA “bomb” which can “kill or irreparably harm” any race or ethnic group that China wishes to kill or harm. How would one deliver such a weapon? Could it be distributed via unsuspected Chinese civilian airliners who release trillions of nano-sized “killer-bots” into the atmospheric jet streams that will carry these killer bots downwind to a targeted population which literally “would never know what hit them?” Could it be placed into municipal water plants which distribute water supplies to entire cities and districts? Could trillions of these DNA-based killer-bots be released into the headwaters of major river systems from which it would flow into the water supplies of every city downstream? Could it be placed in major food distribution nodes? Could it be aerosolized to be distributed via innocuous drones passing over a large crowd at a professional or college sporting event? I’m sure readers of this post can think of other methods to mass distribute an invisible and utterly lethal DNA-weapon of mass destruction. It would be such an insidious weapon because it would be developed by a nation’s military bio-engineers, but would be distributed via many non-military means. In the second link, which was written in 2017 and also warned about DNA-based bio-weapons, Microsoft’s founder, Bill Gates, warned that “such weapons could kill more people than nuclear weapons.”

These warnings are critically important and people need to be warned. However, this danger has been discussed for more years than many might realize. There may be some readers who recall that twelve years ago in 2007, I warned in a post about the dangers of Chinese nano-technology being combined with DNA/genetic research to create DNA-based weapons of mass destruction that would be delivered via nano-tech mechanisms. This piece I wrote in 2007 has had remarkable “staying power” on the internet as it has regularly ranked in the top links of Google’s recommendations whenever “Chinese nanotechnology weapons” are the topic of a web search. Indeed, even 12 years after it was written, it was still ranked number 3 on a Google web-search for this topic (fourth link as I wrote this post). In the early years of my blog, I wrote several posts on this topic of bio-weapons, and for years two posts were high on Google’s web-search recommendations. The second post which was ranked high for some time is attached as the fifth link. While both my posts attached as the third link and fifth link examine this topic in a biblical context, the fifth link has an extensive discussion of how Chinese DNA-based bio-weapons could be used in the fulfillment of several biblical prophecies. The fifth link includes some possible fulfillment of Ezekiel 38’s prophecy on which I have not written for some time, so I recommend these posts to readers for their review. This topic could hardly be more serious.

Since it was known that China was developing these kinds of weapons at least twelve years ago, one can only imagine how far this technology has “advanced” today. The invention of CRISPR technology for manipulating DNA could only hasten the development of such DNA-based doomsday weapons. I’d like to point out an obvious fact. Since nations realized at least twelve years ago that China was trying to develop such doomsday weapons, other nations–being duly warned- have surely been working (A) to develop antidotes to such a DNA weapon and (B) to develop DNA-based weaponry of their own which would be able to target China’s people with such a Doomsday DNA weapon. I’d like to suggest the possibility. Perhaps not only has China developed such DNA doomsday weapons already but perhaps so have several other nations with high-tech, military bio-research facilities. If so, there may already exist a kind of “Mutually Assured Destruction (MAD)” stand-off between China and the rest of the world just like the one that existed between the Soviet Union and the USA in the Cold War with their immense stockpiles of nuclear weapons. Neither side can dare use such a weapon because it would guarantee that such weapons would be used against the nation or alliance which initially used such weapons.

In many ways, the development and deployment of DNA-based annihilation weaponry like that discussed above can fulfill several biblical prophecies, not the least of which is Jesus Christ’s own prophecy in Matthew 24:21-22 that in the latter days of our age would come a time of such dire threat to mankind’s survival that he called it the “great tribulation” which would have the potential to end life on our planet. Add DNA-weaponry to the list of weapons of mass destruction (i.e. nuclear, chemical, antimatter, plasma and laser weaponry, weather modification weapons, etc.) which could fulfill this prophecy in Matthew 24:21-22. The Apostle Paul wrote in II Timothy 3:1 that in the latter days, “perilous times shall come.”  To be sure that these biblical prophecies do apply to our modern times, please read my free articles, Are We Living in the Biblical Latter Days?, What Ezekiel 38-39 Reveal about a Future World War III and The USA in Biblical Prophecy.

One last thought. If we, the public, can know about this type of Doomsday bio-weapon being developed, what kinds of apocalyptic horrors are being developed in secret laboratories around the world that no one outside those labs knows about? Thank God Matthew 24:22 assures us that divine help will rescue mankind before mankind destroys itself.