AS TURKEY DRIFTS OUT OF NATO, THE UKRAINE PREPARES TO JOIN IT 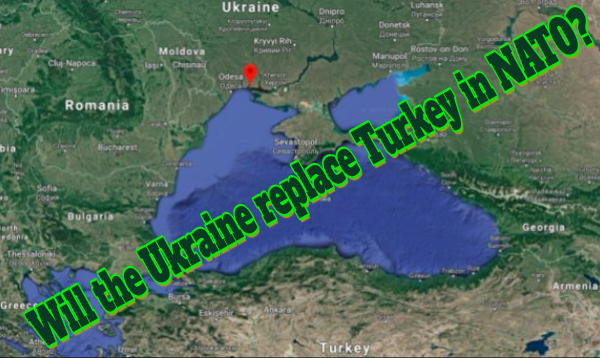 NATO faces both a crisis and an opportunity. Turkey is continuing its process of leaving the NATO alliance and embracing the Russian bear instead. This is a very serious blow to NATO and a boon to Russia. At the same time, NATO has an opportunity waiting in the wings. Ukraine is taking steps to prepare for full-fledged NATO membership. This would be a boon for NATO and a blow to Russia. Let’s examine the details.

The first three links (1, 2, 3) offer varying media perspectives (mostly German and English) on the worsening crisis between President Erdogan’s Turkish government on one hand and President Trump, the USA and NATO on the other hand. This confrontation between two strong-willed leaders seems, at present, to have no middle ground for compromise. If Erdogan insists on deploying the Russian S-400 air defense system, Turkey will be expelled from the F-35 warplane project and the F-35s already built for Turkey will be assigned to another nation. It is very evident that Erdogan’s Turkey has already begun receiving the components for the S-400 Russian system as Russia’s transports are delivering the S-400 components even now. It will take some time to set them up and calibrate everything, but Erdogan has adopted a very “in your face” attitude towards Trump, the USA, and NATO. He has been warned that expulsion from the F-35 program and sanctions vs Turkey will occur if he proceeds with his Russian deal, but he is proceeding anyway. The fourth link is very revealing about Erdogan’s intent. It reports that Erdogan is even willing to have Turkey co-produce the next-generation Russian air defense system, the S-500. If Turkey not only purchases a front-line Russian air defense system which was built and designed to shoot down American and NATO aircraft, but he also joins Russia to build an even more advanced Russian system, NATO will have no choice but to expel Turkey from the alliance. If Turkey is merging its military systems with Russia, it is clear Erdogan is intending to betray NATO and embrace vassalage to Russia. It is possible that parts of the Turkish military and much of its population do not share Erdogan’s enthusiasm to become a new Russian satellite state. When you invite the Russian bear into your nation, it does not leave for a very long time– Ask the Eastern European nations about their post World War II experience with Russia.

What will be the consequences for Erdogan’s steady abandonment of Turkey’s NATO ties and his embrace of Russia? The fifth link and sixth link offer information on the likely sanctions program that the Trump administration will be announcing vs. Turkey in the near future. It is expected that many such sanctions will primarily be economic/financial sanctions. Turkey’s economy, which is already in a significant monetary and financial downturn, will be hit even harder by the sanctions. The sanctions will be designed to cause Erdogan to come to his senses, but his entire career exhibits the mentality of one who will not change his mind, even if it harms his own interest. A recent example of this was the initial outcome in the recent Turkish municipal elections where Erdogan’s party lost contests in Turkey’s largest cities. The hardest for Erdogan to accept was a narrow loss in Istanbul, where Erdogan had once been Mayor. Rather than accept the verdict of the electorate, Erdogan manipulated an elections board into rejecting the outcome and forcing Istanbul’s voters to do the election over again. Rather than being intimidated into voting for Erdogan’s hand-picked candidate, the party opposing Erdogan’s candidate won a landslide victory as the people rejected Erdogan’s heavy-handed governing stance. Erdogan’s hard-nosed tactic backfired on him badly. His hard-nosed refusal to reconsider a bad choice in the Russian S-400 purchase is likely to backfire on him even worse.

Turkey’s exit from NATO will also cause the European NATO nations to get serious about their national defenses. If Turkey aligns fully with Russia, the eastern bloc will heavily outnumber and outgun NATO in the European theater. Europe’s nations would be compelled to significantly raise their military spending levels to build new weapons, expand their standing armies, etc. This will have concomitant impacts on the EU and the Eurozone. The EU spending limits for its member nations would either have to be raised upward considerably or the EU nations will have to dramatically slash their generous social spending. These choices will cause further polarization among the internal factions within the EU, and this will act to further weaken the EU from within.

There is another consequence that is likely to happen, although it may not happen just yet. Turkey hosts a huge US air force base at Incirlik, Turkey and this base was intended to host F-35s from the USA and perhaps other NATO nations. If Turkey deploys the S-400 system designed to shoot down F-35s and other NATO warplanes, the USA will have no choice but to shut down its base at Incirlik and move the entire base’s operations somewhere else. This will also be a huge blow to Turkey’s economy as that US base is a major economic generator to a large region of Turkey. Where will the US operations be moved to? Israel would be one obvious choice, but Israel has minimal real estate to host it and Israel is a non-NATO nation. Greece would be a good choice, and it would likely be eager to host a new, large US air force base. It would help Greek security interests and it would be a big boost to the Greek economy. Another eventual consequence of Turkey’s switch to Russia’s side would be that Russia would have unfettered access for its Black Sea fleet to pass through the Bosporus and Dardanelles to the Mediterranean Sea. NATO would have to counter this new threat, and it could install anti-ship cruise missiles on a host of Greek islands to prevent Russian naval access to the Mediterranean Sea in the event of a shooting war. There is one other place to which America’s large Incirlik operations might be moved. Let’s talk about Ukraine.

A fairly recent post discussed the possible interest of Ukraine in joining NATO. It has since become apparent that Ukraine is more than just interested in joining NATO. It is already taking steps to prepare for that reality. The United States has been quietly upgrading Ukrainian naval facilities at its Black Sea ports to enable American and NATO warships to be based, repaired and deployed from Ukrainian ports (seventh link). American naval warships are visiting Black Sea waters more frequently, and a NATO military exercise was recently conducted in the Black Sea region. It was called Operation Sea Breeze, and I ask that readers notice the four flags that were displayed by participating nations. The flags of NATO members, the USA, Romania, and Bulgaria, are all evident as is the flag of Ukraine. This means Ukraine is already taking steps to merge its military operations, command and communications systems, etc. to NATO standards and protocols. A NATO spokesperson is quoted as referring to Ukraine as among the “allies and partners” of NATO. Turkey usually would participate in Black Sea NATO exercises, but its flag was conspicuous by its absence in the photo of participating nations. I think it is evident that NATO is already pursuing a formal relationship with Ukraine to prepare for Turkey’s apparent exit from NATO. Since Ukraine has been involved in a simmering war with Russia in its eastern provinces for years, Ukraine would surely welcome NATO membership. Such an action could put NATO cruise missiles on Ukrainian soil and within range of Russia’s major cities and its industrial heartland. Russia would howl in protest, but it has little justification to do so. Russia already has cruise missiles in its northern European enclave in Kaliningrad and they are already pointed at Europe’s major cities and industrial heartland. NATO would simply be evening the playing field by extending its defense perimeter much closer to Russia. Perhaps NATO could negotiate a deal where NATO will decline to position NATO missiles in Ukraine if Russia withdraws all its missiles from Kaliningrad.

The geopolitical situation involving NATO, Russia, Turkey, Ukraine, etc. is very complex and how this situation unfolds could have major impacts on both NATO and the EU. It is possible that the crisis involving Turkey’s switch of allegiance could lead to a NATO that is reawakened to the dangers of Russia and which finally implements long-overdue re-militarization. It is also possible that NATO may undergo a realignment of its members given the growing fissures developing inside the EU. Turkey could yet experience regime change and revert to being a NATO member in good standing, but that seems unlikely. We are living in increasingly dangerous times, but most Americans are blithely unaware of the important events transpiring in Eurasia because they are blinded by the never-ending political soap opera in Washington that is fanned by a radically leftist US media.

The above events have clear biblical ramifications. Biblical prophecies warn that a time called “the latter days” or “time of the end” would come into being at the very end of our current age on earth. Momentous events prophesied in the Bible will be fulfilled in our foreseeable future–although exact dates are unknown. We are probably living in the prophesied latter-day period of time. This can be shown because very specific biblical prophecies which were to occur only in the latter days of our age have been or are occurring in our current modern world. The strong evidence supporting this claim can be found in my free article, Are We Living in the Biblical Latter Days? Two other articles that detail specific “latter-day” prophecies to be fulfilled in our future about a global financial/monetary collapse and an eventual World War III are: Is Babylon the Great about to Fall…Ushering in a Global Beast System? and What Ezekiel 38-39 Reveal about a Future World War III. If you read these articles, you will see that the Bible accurately foretold the events of our current time and it reveals what will happen in our future. The incredible accuracy of biblical prophecy can only be explained by its being anciently authored and now implemented by an all-powerful Creator Being.

My thanks to a reader for sending me one of the links.