ANGELA MERKEL QUITS AS CDU LEADER– HOW LONG CAN SHE LAST AS CHANCELOR? 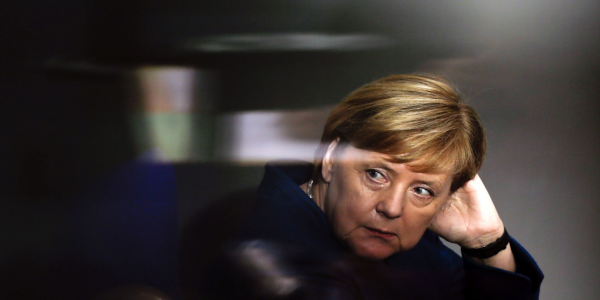 A recent post examined the very bad news received by each party in Angela Merkel’s governing coalition in Germany after the Bavarian state election. Merkel’s CDU/CSU alliance lost a large percentage of its usual voter share to the surging AfD party on the rightist spectrum of German politics. The leftist SPD party in the coalition lost many votes to the surging Green party. Observers saw this, rightly, as a rejection of Angela Merkel’s policies and her governing coalition. The next state election was in Hesse on October 28th. Hesse is home to the German financial center of Frankfurt, and another dismal showing by Merkel’s coalition partners in that election was expected to trigger a governing crisis in Germany. The first link discussed the chances of Merkel’s ability to remain as Chancellor if the Hessian election went badly for her.

The elections in Hesse could hardly have been a worse result for Merkel. Her coalition parties lost a very large percentage of their vote share in the previous Hesse election. Merkel’s CDU dropped from 38.3% to 27.2% and her SPD partner went from 30.7% to just 19.6%. Combining these totals reveals that Merkel’s governing coalition plummeted from 69% to 46.8%. The Green party tied the SPD for second place and the rightist AfD gained 12.8% of the vote, guaranteeing them a significant place in Hesse’s’ parliament. The impact of the result was immediate. The head of the SPD party declared “The state of the government is unacceptable” (second link). If the SPD leaves the governing coalition, Merkel’s reign is over and new German elections will be needed.

In the wake of the crushing defeat for Merkel’s coalition in both Bavaria and Hesse, it is evident that these elections were a referendum on Merkel’s policies of admitting huge numbers of Muslim and African migrants, her pro-EU policies, weak national defense and her non-defense of traditional German culture as Islamic immigrants were seen as trying to impose Islamic culture on swaths of Germany. Merkel’s CDU party has an intra-party election in December to determine its party leader. Merkel has served as both the CDU party leader and the federal Chancellor. If Merkel had lost a bid to continue as CDU leader, she would almost surely have been squeezed out of the Chancellor position as well in a no-confidence vote in Parliament. In a clever move, she opted to voluntarily resign as party leader and announce that she would not seek another term as Chancellor when her term expires in a few years. This move was designed, I’m sure, by Merkel to prolong her grip on power as the Chancellor of Germany. However, many do not believe that she will be able to continue as Germany’s leader for much longer. The third, fourth and fifth links offer American, German and British media perspectives on Merkel’s actions and her weakening grip on power.

The upcoming CDU party election will reveal much about the future of the CDU as well as Merkel’s own future. Merkel has groomed a successor, Annegret Kramp-Karrenbauer, who Merkel hopes will be elected at the CDU convention. However, she will be opposed by two Merkel rivals– the current Health minister, Jens Spahn, and a former party rival named Friedrich Merz. Mr. Merz has been absent from CDU party politics for years, but he is now emerging to be a leading contender to replace Merkel as party leader (sixth link). Several outcomes are possible. If Merkel’s preferred successor is elected, Merkel is likely to stay on as Chancellor, albeit in a weakened status as a “lame duck.” If one of her rivals takes over as CDU leader, Merkel is likely to be forced out of her federal position as well. Merkel’s governing coalition of the CDU, CSU and SPD is steadily losing voter support. If the CDU went into new elections with a Merkel rival as their candidate, the CDU may actually increase its share of the vote as Merkel’s unpopularity would no longer be a drag on their party. It must be stressed that the governing coalition’s future is not going to be determined solely at the pending CDU party convention. The head of the SPD party, Andrea Nahles, is under growing pressure within her party to leave the governing coalition as the SPD party base is abandoning it in greater numbers the longer it stays in coalition with Merkel’s party. In the last German federal election, the SPD leader, Martin Schulz, had promised that he would not enter any coalition with Merkel’s party. After the election, the SPD did exactly what its leadership had promised it would not do–it joined Merkel’s coalition. Mr. Schulz was forced out after this occurred, and a major part of the SPD base was offended. For American readers, this was similar to President George Bush Sr. running for office on a clear “Read my Lips, No New Taxes!” promise. After he was elected, Bush raised taxes anyway, and plummeted in the eyes of the American public. The SPD is suffering the same fate as President George Bush Sr., and will likely continue to lose its voters as long as it stays in a governing coalition with the CDU/CSU.

Underlying all the political struggles is the fact that Angela Merkel’s Germany has been a powerful force for globalism in Europe and the world. Nationalists have been replacing globalists in one nation after another so the globalists can ill afford to lose Merkel. They are trying to keep her in what is now essentially a caretaker role as Chancellor for as long as they can; however, there is a sign that they realize Merkel’s days as Chancellor are limited. The final link expresses a globalist effort to put a positive “spin” on Merkel’s exit from power. This opinion piece signals to me that they are already starting the transitional steps to replace Merkel with what they hope will be her globalist protege. However, it is hard to predict what will happen in the next German election. With new leaders at their head, will the CDU and SPD may regain their usual voter shares or their decline may continue. The Green party has been surging in recent elections and the AfD is becoming a significant fore as well. Germany’s electorate has been fragmenting its vote shares among more parties, and it may be very difficult to form a government among the competing parties after a future election.

Time will tell, but it now seems apparent that early German elections will be necessary at some point. Even if Merkel’s preferred successor heads a new government, that successor will not have the gravitas, global relationships or power that Merkel has wielded. The forces for globalism are being weakened in Germany at a time when globalists are being voted out of power all over the world (Hungary, Poland, Austria, Italy, Brazil, the USA, etc.). Even globalist nations like Germany and Sweden have had their governments thrown into a state of continuing crisis. Nationalists are gaining strength at an increasing rate. This competition between the world’s globalist and nationalist blocs is becoming more intense and it is likely to get ugly. The Brexit negotiations between the United Kingdom and the EU are stymied at present. Nationalists want a hard Brexit, but Prime Minister Theresa May (who wanted to stay in the EU) seems to be trying to obtain as “soft” a Brexit as possible. The outcome of this process is not yet known.

This struggle between the globalist bloc and the nationalist bloc was prophesied in the book of Revelation to occur in the latter days of our age. In Revelation 17-18, the globalists are identified as the entrenched governmental and private sector leaders who are enriching themselves in an insider cabal at the expense of everyone else (Revelation 18:2-3). The nationalist bloc is identified in this prophecy as a cryptic alliance of “seven heads and ten horns” that will overthrow the globalist bloc which is called Babylon the Great (Revelation 17:9-18). This biblical prophecy foretells that the nationalists will win this struggle, but it does not specify how long the struggle will last or in what year the final outcome will be evident. Germany has been a major force for the globalist camp, and its current internal leadership crisis bodes ill for the globalists in the EU and the world. There will be much to watch as this struggle continues to unfold. For in-depth information about how biblical prophecies are being fulfilled in modern events, please read my free articles, Are We Living in the Biblical Latter Days?, Is Babylon the Great About to Fall…Ushering in a New Beast System?and The Babylonian Origin of the Modern Banking System. If you read these articles, you will gain insights into how the Bible reveals a Divine “script” for the nations which is being acted out in our time.