A REPORT FROM INSIDE “FREE AMERICA” 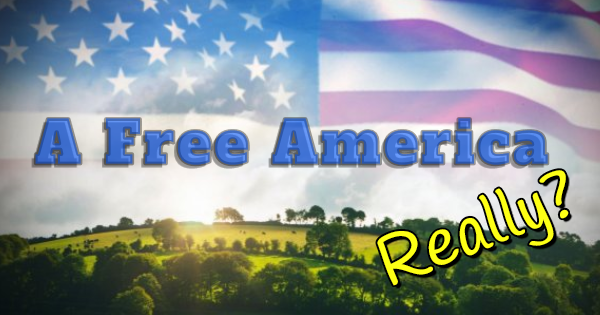 I never thought, I would ever, be writing a post with a title like this one. In America and the western world, we have long taken our freedoms for granted. The governmental reactions to the coronavirus pandemic have taken away or severely limited many routine freedoms in all kinds of restrictive “lock-downs.” Such simple things as going to a restaurant or bar, getting a haircut, going to a sports event or to a park or beach have become, for many people, forbidden activities. This has all happened within a couple of months. National economies were shut down due to the decisions of unelected health care “experts” who knew nothing about economics or how nations work. Although many American states and European nations are beginning to re-open their societies, the process varies from nation to nation, and some nations, states, and cities are still heavily locked down. I live in South Dakota, a state in the interior of the USA, located deep inside the “fly-over” country. A number of states in the middle of the USA were able to retain some Constitutional freedoms as our governors refused to issue lock-down orders. To my knowledge, Wyoming, North and South Dakota, Nebraska, Iowa, and Arkansas had no lock-down orders, but  “social distancing” practices were in effect.

In our state, we were blessed to have a governor, Kristi Noem, who told South Dakotans she would not issue a lock-down order as she believed nothing in the US or South Dakota Constitutions gave her the authority to arbitrarily take away people’s constitutional freedoms. Most state governors had no such scruples. I have watched in horror as governors in New York, California, Illinois, Michigan, New Jersey, Washington, Wisconsin, Minnesota, etc. have all but declared themselves to be the gauleiters and commissars of a new “Occupied America” (it was even worse in Europe). The simplest of human activities were forbidden to people. Invariably the governors of states that exercised maximum oppression of their people were Democrats and the governors of states which allowed many freedoms to remain in place were Republican. [If you are American, you might to remember that fact on election day.]

I saw one link where a resident recorded a video of two police officers coming to warn a homeowner she had committed an offense vs. her state’s governor. Her “offense?” She had allowed her child to play with the child of her next-door neighbor. Such “lawlessness” must have been reported by a snitch in her neighborhood who acted with an intrusiveness that was worthy of the old East German Stasi. Here in America, this kind of thing happened. Also, here in the USA, there was a well-publicized case where a Texas salon owner re-opened her business and re-employed her stylists so they could all make money to feed their families. A Texas judge, all full of himself, had her dragged into court and he all but demanded she grovel to the power of the state, apologize to the judge, etc. or go to jail (first link). She chose to go to jail, and became an immediate folk hero. I heard the exchange between the arrogant judge and the businesswoman played on a national radio program. It became such a cause célèbre that the Governor and Attorney General of Texas intervened in her behalf and she was released from prison. People have to earn a living, virus, or no virus. Her case became an example of how egregiously states were violating the Constitutional rights of American citizens.

A couple weeks ago, my daughter and I drove outside the Sioux Falls metro area and stopped at a bar that was open in a small town and had a beverage. We also stopped at a superette/gas station in another town. We went through three counties, and we did not see a single mask or any evidence that there was pandemic anywhere. It was a taste of the old “normalcy.” It still felt like we were living in “Free America” compared to the rest of the nation we watched in the televised reports. Even in Sioux Falls, some businesses stayed open. I did find a barbershop that remained open so I was able to keep from looking like a hippie. People in the rest of the world may not realize how rural South Dakota is. Even in normal times, you can drive for miles in a rural county on an “oil road” and not meet a single car. Many counties in South Dakota have still had no cases of Covid-19. Our population density is so small in much of our state that social distancing was pretty much a way of life already.

My website’s statistics reveal that there are visitors to my website from approximately 100 nations each month, so some of what I write is for non-Americans as well as Americans. Allow me to offer some information in the second link which I think gives accurate commentary on what is happening in the global pandemic and some of the fallacious assumptions and statistics which are extant in the media. The second link also offers good medical reasons why you have the right to determine what is done to your own body. If the third link (by a neuroscientist) was read by everyone in the world, the damage of the coronavirus pandemic would be greatly alleviated. It offers strong medical evidence that a deficiency of Vitamin D is a major factor predisposing people to contract this virus (or any virus). It details the obvious: that flu viruses fade in the Spring because people get outside and are exposed to the sunlight–which builds up their Vitamin D to optimum levels to have strong immune systems. The flu seasons come back in the fall because cold weather drives them indoors so they steadily become more Vitamin D deficient and vulnerable to viruses. The link also explains why dark-skinned people are contracting COVID 19 and dying from it in greater numbers than fair-skinned people. It explains that Vitamin D is created when your skin is exposed to sunlight and that dark-skinned people are less able to utilize sunlight to make Vitamin D. Oddly, lock-downs forcing people to stay indoors prevents them from building Vitamin D in their bodies. This makes their immune systems steadily weaker and more susceptible to viruses than those who are spending time outdoors. The counter productiveness of lock-downs is examined in greater detail in the fourth link.

Consider this aspect of the lock-downs. People have been driven to ordering products via on-line purchases and avoiding brick-and-mortar stores. The mom and pop stores do not gather meta-data on you, but the online stores do. Many brick-and-mortar stores will never re-open, but the Big Tech platforms will process more orders, gathering a vast new trove of data about you and everyone else who makes on-line orders during the pandemic. However, even brick-and-mortar stores may be ordered to spy on you. The fifth link describes a, way the Washington State government will compel physical stores to gather personal data on you. It is all being done in the noble-sounding purpose of “contact tracing,” but the result is even more loss of personal privacy rights.

The sixth link, seventh link, eighth link, and ninth link document a trend in America that is growing rapidly. The American people are demanding an end to the lockdown’s denial of their Constitutional rights, and are growing more assertive about exercising them no matter what arbitrary governors decree. Churches and businesses are insisting on re-opening and an increasing number of county sheriffs are championing their cause. The First Amendment to the US Constitution includes this language: “Congress shall make no law respecting an establishment of religion, or prohibiting the free exercise thereof, or abridging the freedom of speech…or the right of the people peaceably to assemble.” Obviously, if the federal Congress cannot make any such law, neither can the member states of the federal union who joined the union which is governed by this language. The freedom to assemble is not limited by any language that this right is voided if unelected health care “experts” say otherwise. People are regularly free to “assemble” politically, in religious activities, commercial businesses, sporting events, etc. No governor or mayor can cancel those rights. There are signs of hope that these rights are being reaffirmed. The tenth link relates that the Supreme Court of Wisconsin voided the executive decrees of the gauleiter (excuse me, the governor) of that state. The eleventh link reports that even a county in Illinois has decided to defy the diktat of that state’s gauleiter (excuse me, governor).

The twelfth link needs to be seen by everyone. It is an 11-minute video of what happened when a contingent of riot-police in California were ordered to disband a group of patriotic Americans exercising their First Amendment rights to “peaceably assemble.” A U.S. military veteran with a bullhorn championed the people and spoke directly to the riot police in their “Gestapo black” uniforms as he told them they had been given unconstitutional orders and that they needed to disregard them. This link has a surprise ending that you will not want to miss! The thirteenth link features an appeal by a police officer urging fellow officers to enforce the Constitutional right of the people, not unconstitutional orders from executive-branch officials.

These are unprecedented times in not just the USA but the entire world. It is my opinion that the Deep State globalists (called Babylon the Great in Revelation 13, 17, and 18) are making an all-out grab for dictatorial power over the planet. They are also testing the limits of the American people to accept regimentation and the loss of their rights. “Waiting for a vaccine” is not an option for the USA or any other nation. Any nation adopting that policy will be in the Great Depression long before any vaccine is found to be “safe and effective.” I think the Deep State globalists are trying to transform the world’s population into a mass of controllable serfs via “public health” schemes. The Nationalist Populist camp is fighting back, and President Trump is their champion. I think the globalists have made a fatal error. They forgot that even Democrats will abandon their party if dictatorial Democrat governors forbid them to earn a living, feed their families, pay their bills, etc. This week a special election was held to fill an open seat in the US Congress in deeply-Democrat California (fourteenth link). The seat was won by a Democrat by 9 points in 2018, but a Republican won the seat in a 12-point landslide margin of victory. That marks a 21 point swing away from the Democratic Party to the Republican Party, and it reveals what the public thinks of Governor Newsom’s dictatorial edicts! This race may be a taste of what is to come in the November elections here in the USA.

This modern struggle between the Globalists and Nationalists was prophesied in the Bible. To learn what the Holy Bible’s prophecies have to say about how events will unfold in the years ahead of us, please read my articles, Are We Living in the Biblical Latter Days? and Is Babylon the Great about to Fall…Ushering in the New Beast Kingdom? You may be surprised how accurate biblical prophecies really are.