“I WILL SHOW WONDERS IN THE HEAVENS” 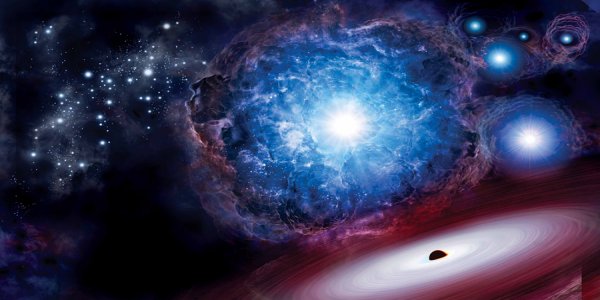 There is a relatively obscure prophecy about the latter days in the Bible that receives little attention. It is in Joel 2:28-32 and it is also cited in Acts 2:16-20. Joel 2:30 quotes God as saying in a prophecy: “I will show wonders in the heavens.” Verse 31 certainly seems to be a reference to solar and lunar eclipses in the latter days, but I think the reference to wonders that God himself will show in the latter days goes far beyond predictable solar and lunar eclipses. Young’s Analytical Concordance to the Bible defines the Hebrew word translated “wonders” in Joel 2:30 as meaning “wonder” or “miracle.” It could be anything in the sky or heavens above us that caused mankind to marvel or look at. The word “miracle” strongly infers that these “wonders” will include events that are real “miracles,” phenomenon that only God can cause unexpectedly to appear in mankind’s eyesight. Predictable eclipses are marvelous events (like the great solar eclipse across America about which I posted as my home city was in the 93% of totality zone), but they are not unexpected or miraculous ad-hoc events. In this post, I’d like to suggest several celestial or atmospheric alternatives which could qualify as miraculous events, indicating a divine hand in their occurrence.

The first celestial event to be examined which could qualify as a divine “sign” in the heavens that the latter days are coming to a conclusion would be an impressive and unexpected supernova which appears in the nighttime sky (or even in the daytime sky, if bright enough). The first link relates that in 1066 AD, an extremely bright supernova was observed in the heavens. It was called a “guest star” by Chinese observers and was “brighter than a crescent moon and visible in the daytime.” This supernova occurred almost a millennia ago, and, as the article observes, “we’re long overdue” for a similar event. There was a supernova observed in 1604 AD, but nothing very spectacular has occurred since. The second link suggests that Betelgeuse, a star in the constellation, Orion, is a candidate to be a supernova. Indeed, the article notes that due to how many light years this star is from earth, it may have exploded into a supernova long ago, but its explosive light has not yet reached observers on earth. If a supernova does appear in our sky, it could be that divine action exploded it long ago so its explosive light would appear visible to us precisely during the latter days of our age when “wonders in the heavens” are prophesied to occur. If two or more supernovas occur, then we are looking at a very good likelihood that the Creator God who made our Universe is sending us a warning that our current age is almost over and the time for repentance has almost run out (Joel 2:32). If a supernova became visible in particular constellations, it would be even more likely that God has sent the message. For example, a supernova appearing in the constellation, Leo “the lion,” would be especially meaningful. Jesus Christ is referred to as the “lion of Judah” (Revelation 5:5) and such a supernova would argue that the Second Coming of Jesus Christ/the Messiah is nearing. I’m not predicting such an event, but that would be my interpretation of the event if such a supernova did occur in that celestial location.

These phenomena can sometimes be very bright objects in the sky. Most are far too dim to be seen with the naked eye, but there are exceptions. Halley’s Comet makes periodic returns to our solar system and sometimes its arrival has coincided with major historical events, but other times it is hardly noticeable. Its most recent return in 1986 was a huge disappointment. It was very difficult to find even with a telescope and directions regarding where to look in the nighttime sky. I can recall taking my family outside the city to view it with a telescope, but it was a very underwhelming experience. Comet Hale-Bopp was more recently visible in the nighttime sky, but it was hardly a huge event. Most people ignored it. If an unexpected comet were to arrive in our solar system which was very bright with a long tail in the nighttime sky, it would be more of an impressive “sign” in the sky.  If an actual asteroid large enough to impact the earth is in our future, it would be an event causing panic around the world. A large enough such object likely killed the dinosaurs when it impacted into the earth, and even a small asteroid would have a catastrophic effect if it collided with the earth. Movies such as Deep Impact have depicted the catastrophic effect that an asteroid hitting the ocean would have on our planet. It would look like a “flaming mountain” falling through our atmosphere before it hit the earth in a fireball causing destruction, tsunamis, etc. The book of Revelation in chapter 8:8-11 describes two heavenly objects hitting the earth–one in an ocean and one on land in a riverine region. The book of Revelation’s description of what a meteor or asteroid would look like as it plummets through the atmosphere and hits the ocean matches quite well how such an impact was depicted in the aforementioned movie. Since the Apostle John had almost surely never seen such an event in his lifetime, his accurate description of a heavenly object on fire as it falls through the atmosphere argues that he did see it in an actual vision, not in his imagination. The death tolls for such events would be very high, and when they occur, survivors will surely be told by biblical teachers that Revelation 8:8-11 foretold the event(s). These will surely qualify as “wonders in the heavens.”

Another “wonder” in the heavens could be something entirely new and not previously observed by scientists and astronomers. Such an unprecedented and so-far unexplained celestial event has, indeed, now occurred. It is known by the acronym, STEVE, as explained in the third link. This is a “different celestial phenomenon” than an Aurora and appears as a shaft of vertical purple/white light linking the earth and the night sky. Its existence was only noticed in recent years, and its exact nature is still a mystery to science. A photo of this new phenomenon appears in the third link. Since it appears to look similar to a wide laser beam, I wondered if it could be a secret, high-tech project like HAARP, but it appears to be something else. If it is truly a new celestial phenomenon that has never previously been seen or reported until recent years, it could qualify as a “wonder in the heavens” that has manifested itself only in our current latter day time period.

Revelation 16:8-9 foretell that something is going to go “haywire” with our sun in the final portions of the latter days. These verses prophesy that the sun will become unusually hot and will “scorch” mankind with unusual heat. This will occur during the existence of the “beast” ruler/system on earth so this event will occur after the fall of our current globalist Babylon the Great system and the institution of a new “beast” system which will replace it (Revelation 13, 17 and 18). It appears this will occur during the ministry of the Two Witnesses who will “plague” the beast, and it may even be caused by their divinely-delegated powers (Revelation 11). This may be an unusually severe “solar maximum” or a completely unexpected increase in the sun’s heat and brightness. This “wonder in the heaven” is specifically prophesied to occur during the beast’s rule, so remember this post when/if you see this in the future and remember the Bible foretold it. The biblical prophecy about this heavenly event does not relate to how long this “plague” on the sun will last.

There is one final “sign in the heaven” that is prophesied in the Bible. At the very end of our age, Matthew 24:30 prophesies that “the sign of the Son of man in heaven” will appear overhead in the earth’s sky and that it will quickly be followed by Jesus Christ’s actual return accompanied by hosts of heavenly angels and beings (Matthew 24:31, Revelation 19:11-20). What this “sign” will be is not detailed in the Bible, but the context of the prophecy indicates that mankind will know what it portends and they will “mourn” that the end of this age has arrived. Since mankind will then know from this sign that the end of the age is imminent, I believe it can be inferred that during the ministry of the Two Witnesses, they will make known to mankind what that “sign” will be so it is recognized for what it is when it happens.

The above list of heavenly signs is by no means a complete one. When we are dealing with an infinitely-powerful Creator Being taking increasing control of events, as the end of our age approaches, our small minds cannot possibly grasp all that is within God’s power to do. For that reason, it is possible that celestial or atmospheric events will take place which will be “wonders in the heaven” that we cannot yet anticipate. For additional information on above-mentioned topics, please read my free articles, Are We Living in the Biblical Latter Days?, Is Babylon the Great about to Fall…Ushering in a New Beast System? and The Two Witnesses.