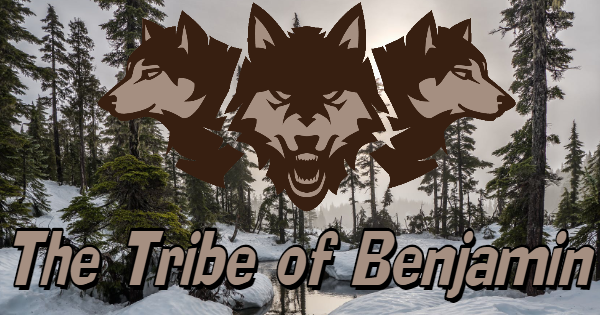 THE TRIBE OF BENJAMIN: A “WOLFPACK” FROM THE NORTH

From that time on Benjamin’s population lagged far behind the other tribes, and they were the smallest tribe in Israel at the time one of their members, Saul, was made the first king of Israel (I Samuel 9:21). When the tribes of Israel divided into the two kingdoms of Israel and Judah, Benjamin remained with the tribe of Judah (I Kings 12:21). After Judah went into captivity, a contingent of Benjaminites returned with the Jews to rebuild the Temple and Jerusalem (Ezra 1:5, Nehemiah 11:3-4). However, even as most of the tribe of Judah remained in Asia, most of the Benjaminites also remained in Asian locations.

Herbert Hannay’s book, European and Other Race Origins, included ancient records that “representatives of Benjaminites spread over the whole length and breadth of Asia Minor.”(1) The Bible indicates that Israelites were living in Asia Minor during the Apostolic era. The book of I Peter begins by addressing “God’s People [marginal reading in the KJV] scattered throughout Pontus, Galatia, Cappadocia, Asia and Bithynia.” The term “Galatia” indicated the same people as the “Gauls” of Europe. The New Testament records that one famous Benjaminite, Saul of Tarsus, was born in Asia Minor, so there is biblical evidence that Benjaminites lived in Asia Minor in ancient times. Saul of Tarsus was the Benjaminite who became the Apostle Paul (Acts 9:11, 13:9 and Romans 11:1).

Herbert Hannay links the Benjaminites to the modern nation of Norway (2), a conclusion with which I concur. The biblical clue for Benjamin’s location in the modern world is limited, but indicative. Genesis 49:27 states:

“Benjamin shall ravin as a wolf: in the morning he shall devour the prey, and at night he shall divide the spoil.” (KJV)

Wolves are indigenous to northern climates, indicating that Benjamin’s latter day territory will be in a northern latitude. Since this author has identified Finland as Issachar, and Sweden as Naphtali, the only Scandinavian nation in a northern latitude not yet identified as one of the tribes of Israel is Norway. By the process of elimination, Norway would seem to constitute modern Benjamin. Norway is a lightly populated nation, consistent with Benjamin’s historical role as the least populous of the tribes of Israel. Yair Davidy and I have traditionally linked the tribe of Issachar with modern Finland, leaving Norway and Sweden as candidates for the modern Benjaminites. While it is true that contingents of one tribe can live within the territory of a modern nation dominated by another tribe of Israel, it is my opinion that Norway is most linked to the ravenous, raiding style of the Vikings. Sweden also has twice the population of Norway. Given Benjamin’s biblical role as the Israelite tribe with the smallest population base, Norway’s lesser population also makes it a good candidate for being Benjamin. Yair Davidy and I agree that there is a strong Benjaminite component to the Normans (i.e. “North-men” or Nor-mans) who invaded England in the 11th century A.D.

The tribes of Joseph (Ephraim and Manasseh) would be closer genetically to the Benjaminites than any other tribe of Israel because Joseph and Benjamin were the only sons of Jacob and Rachel. Norway has traditionally had excellent relations with the British and Americans, which one would expect of the descendants of Benjamin. Sweden has been more distant from the British and Americans, both geographically and politically. In World War II, Norway fought the Nazis as allies of the British and Americans. Although conquered by Nazi armies, Norway had a vigorous “underground” which fought the Nazi occupiers. By sinking a ship with a crucial supply of “heavy water” destined for the Nazi atomic bomb project, the Norwegian underground made a meaningful contribution to the war effort against Hitler. Sweden, on the other hand, stayed neutral in World War II, and chose not to fight the Nazis. In World War II, Norway displayed a much closer affinity to the tribes of Joseph than did Sweden, which one would expect of the tribe of Benjamin.

The phrases about “devouring the prey” and “dividing the spoil” do not describe today’s Norwegians, but they very aptly describe Norway’s well-known Viking heritage. The Vikings were known for preying (in raiding parties akin to wolfpacks) on all the other nations of Europe from bases in their northern coastlands. This parallels ancient times. Even as Benjamin warred against all the other tribes of Israel in a bloody civil war in biblical times, the Vikings also raided and preyed upon all the other tribes of Israel who had migrated to various locations in Europe. The Vikings raided the British Isles and Western Europe, and the Mediterranean coastlands of Europe as well. The Vikings also raided into and settled in the modern Ukraine and western Russia. National Geographic Magazine made this comment about their eastern forays:

“By the early ninth century they [the Vikings] were navigating the Volga and the Dnieper to reach the merchants of the Abbasid caliphate. By 860 they had attacked Constantinople…”(3)

The Encyclopaedia Britannica notes that the term “Russia” is linked to the term “Russ,” a name given to Viking Norsemen of the 10th century A.D. who migrated from Scandinavia to the regions of Novgorod and Kiev (4). The name, “Russia,” has a Scandinavian/Viking origin, not a Slavic one, even though modern Russia is now overwhelmingly Slavic. The Viking name, Russ, may well reveal a Benjaminite origin as one of the sons (and clans) of Benjamin was named “Rosh” (Genesis 46:21). Since the vowels were not written in ancient times, the names of “Rosh” and “Russ” both have the same consonants [R-S] in their root word.

The National Geographic also notes the prominence of wolves (the symbol of Genesis 49:27 for Benjamin) in Viking mythology and art (5). Historically, other Scandinavian people besides the ancient Norwegians also comprised the Vikings; however, the Viking heritage seems most closely identified with Norway.

There is another possible connection between ancient Benjamin and modern Norway. It was noted above that when the ancient Israelite tribes divided into a northern kingdom of Israel and a southern kingdom of Judah, Benjamin stayed with Judah. The Benjaminites had strong genetic ties to the tribes of Ephraim and Manasseh, but also retained a cultural affinity for the tribe of Judah. The modern Norwegians brokered the Oslo accords of 1993, a famous peace agreement between the Israelis and the Palestinians. Even though the Oslo Accords now seem to have failed to bring any peace to Mideast, the willingness of Norway to involve itself in the Israeli peace process is consistent with one would expect of modern Benjamin, which was once part of the Jewish kingdom of Judah.

Based on the biblical clues about Benjamin’s location in the latter days, I believe Norway best fulfills the prophecy of Genesis 49 about the tribe of Benjamin. Curiously, while Joseph’s tribes of Ephraim and Manasseh were destined to become the most populous tribes of Israel, Benjamin (Joseph’s brother) became the Israelite tribe with the smallest population.