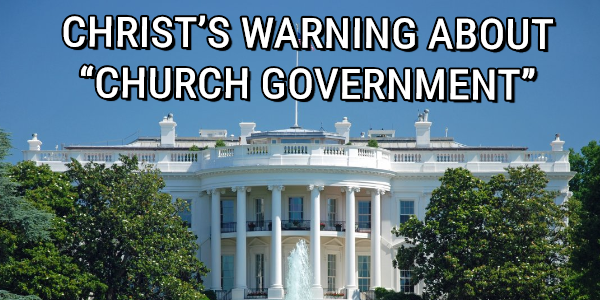 Christian churches have many viewpoints about what is the correct form of “church government.” While the Bible includes some information on organizing church bodies, Jesus Christ gave his church a very direct warning to avoid one specific kind of “church government.” His warning was very consistent with the Old Testament instructions and warnings for secular forms of government.

There is no question that God is the absolute ruler of his Divine kingdom. Therefore, some churches and people think they should also have hierarchal, “top-down,” rule in churches and human relationships. However, God is a perfect, sinless Being who is always motivated by love, humility and compassion. The only way a hierarchal structure can work for the good of all is if the one at the top of the hierarchy is sinless and perfect. There are no sinless, perfect human beings, and the record of human history is that human hierarchies inevitably corrupt those in the hierarchies and become oppressive toward those who are ruled. Let’s consider God’s instructions in both the Old and New Testaments about secular government and church administration.

In ancient Israel’s Theocracy, God structured it to limit the power that could be concentrated in the hands of any one human leader. There was a system of Judges, Tribal Elders, Priests and Levites which shared power and acted as a system of “checks and balances” on each other. For example, consider God’s commands about handling money. While the High Priest was the chief religious official and only male descendants of Aaron could serve in that office, God structured ancient Israel’s Theocracy so the High Priest did not collect, count or distribute the nation’s tithes. God commanded that all tithes were to be collected locally by the Levites (Numbers 18:19-24) who were spread throughout the nation in 48 independent cities as Joshua 21 relates. The Levites counted all tithes and kept 90% for local purposes. After doing so, the Levites then sent the remaining 10% (a tithe of the tithe) to the High Priest and the descendants of Aaron for their financial support (Numbers 18:25-29). God likely established this “local control” system as a check and balance in ancient Israel to insure that the nation’s top spiritual leaders never became corrupted by lusts for monetary gain or the perks and privileges of wealth.

After centuries of having God’s system of government, the time came in I Samuel 8:5 when the people demanded a human king. Samuel was displeased and God Himself felt rejected. Nevertheless, God let them have a human king, even though he told Samuel to warn the people that they were making a terrible mistake in asking for a hierarchal, “top-down” human government. God warned the Israelites that concentrating so much power in human kings would surely result in personal and financial oppression of the people (I Samuel 8:14-18).

The record of Israel’s and Judah’s kings is mostly a sorry record of sin, abuse and corruption. However, let’s consider the examples of just the first three kings, all of which were personally selected by God. These kings were Saul, David and Solomon. All began their reign in humility, but the insidious corrupting influence of power led them all to “go bad.” Only David realized what had happened to him and repented. Saul was very humble at the start (I Samuel 9:21, 10:22), but he became so corrupt and arrogant in office that he literally went mad, and was rejected by God. David was a humble shepherd boy who God selected to replace Saul, but even he was corrupted by authoritarian power to abuse others (he committed adultery with the wife of one of his top generals and then conspired to have the general killed). Solomon began with extraordinary humility (I Kings 3:3-13), and God gave him unprecedented wisdom and even appeared to him twice (I Kings 11:9)! However, even Solomon couldn’t handle authoritarian power and gave himself over to gross idolatry and serving abominable deities (I Kings 11:4-8).

The Old Testament record is clear. God never wanted the Israelites to have human kings because he knew human kings with authoritarian power would be subject to the addictive and corrupting influence of power and wealth.

Let’s next examine Jesus’ warning to his disciples about New Testament “government” in the church. In Luke 22:24-30, Jesus intervened in a “strife” which resulted from the disciples arguing about who would be greatest in his future kingdom. This argument reveals that the disciples were succumbing to a lust for power just at the thought of being leaders in Christ’s eventual kingdom. Jesus’ instructions to them were clear and unmistakable. Jesus gave them an example of the kind of “church government” that he forbid his New Testament church to adopt. He pointed out the “kings of the gentiles” who exercised “lordship” and “authority” as the kind of government which would be forbidden in the church that Jesus would start through the apostles. Jesus’ told his disciples that this type of government should “not be so” in the church and that he wanted his church leaders to be humble servants of the people.

The Bible only gives us the text of what Jesus said. It does not give us the emotion and gestures which accompanied these words. If we had a video of what happened instead of just a textual quote, I think the intensity of Jesus’ feelings on the subject would be much more apparent. Remember that Jesus once whipped the moneychangers in the Temple who were “doing business” there under the administration of the Pharisees (John 2:13-17). Jesus was brutally harsh in his condemnation of the Pharisees who governed the Jewish community in Judea via an oppressive oligarchy (the Sanhedrin) which was headed by a chief leader (The High Priest). Jesus denounced the Pharisees’ love of power, privilege and money even as they oppressed the people with burdens hard to be borne (Matthew 23 and Luke 11). When Jesus heard the same lust for power in the words and attitudes of his disciples, I think it is a safe bet that his correction to them was also an emotional one. Did he raise his voice and gesture at them as he commanded them not to implement any hierarchal, king-like form of “government” in his New Testament church? Jesus acknowledged that these men would each rule a tribe of Israel in the eventual kingdom of God, but he warned them that they must not adopt any authoritarian rulership structure in his church.

The Bible records that the corrupting desire for power was present in the early church. Diotrephes is cited as an example of one who had a lust for “preeminence” in a New Testament church. III John 9-10 records that this self-exalting person seized control of the church in a power struggle and “cast out” (or “excommunicated” as a marginal note in my KJV renders it) the converted members of the congregation. Diotrephes lusted to head the authoritarian style of “church government” which Jesus Christ had forbidden. Simon Magus also lusted for power and money in the early church (Acts 8:13-20), and Paul warned the Ephesians that their congregation would be ripped apart by those whose lust for power would lead them to try to create their own power base of disciples (Acts 20:29-35). Paul’s warning also reveal that the lust for power is inseparable from a lust for money. In modern terms, these “grievous wolves” would try to draw away members to “start their own church” with “the wolf” as the authoritarian leader. Human nature never changes so we can expect the same kind of motivations in Christian churches today.

It is evident in both Old and New Testament examples that concentrating power in the hands of a leader (or a small group of leaders) inevitably corrupts the leaders. This is true in governments, corporations, churches and any form of organization known to man. That is why God warned against having authoritarian human leaders both in ancient Israel and in his New Testament Church. Hebrews 13:8 tells us that Jesus is “the same yesterday, today and forever,” so the warning he gave to his disciples about church “government” is the same warning he would give to us today.

Modern Christian churches should “examine themselves” to see if they have heeded Jesus’ warnings against having church structures which are authoritarian or hierarchal. If modern churches implemented the same “local control” method for handling money that God ordained for Levites and Priests in ancient Israel, Christian Churches would exhibit a congregationalist structure. If biblical “money flow” commandments were followed in modern churches, local pastors would collect all funds donated by local members. Local pastors would keep 90% of all donations for local use and send 10% of it to a national office which would be used to coordinate whatever activities the local congregations had in common. If this practice was followed, the “spirit of the law” in how God structured his ancient Theocracy would be followed, and the potential for abuses of power in modern churches would be dramatically lessened. Jesus knew that if authoritarian structures took hold in the Church, the sins of the Pharisees would be repeated as church leaders would seek “the chief seats,” exercising oppressive control over church members’ lives even as the leaders would indulge themselves with perks, money and privileges.

Perhaps you should ask yourself this question: How well has your church organization heeded the warning of Jesus Christ in Luke 22:25-26?