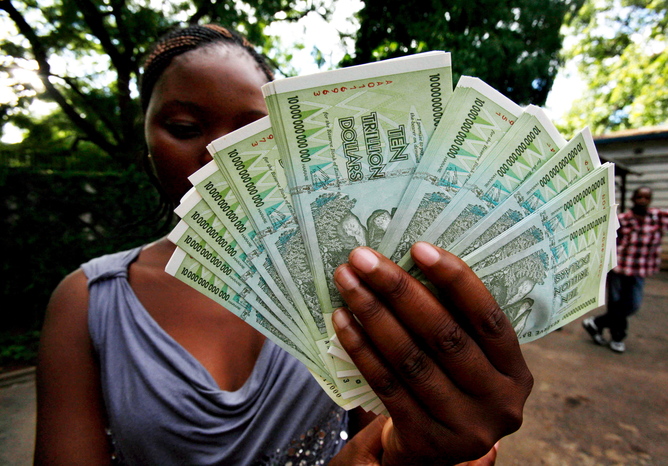 Many of my fellow Americans couldn’t even find the nation of Zimbabwe on a global map. It is a nation in Africa that has a history of almost unbelievably high rates of monetary inflation. When it made monetary reforms years ago, it ended a Zimbabwean currency that was so inflated it made the former German Weimar Republic’s currency look stable. These three links offer brief histories of how bad the inflation became before the Zimbabwean currency was replaced. Several currencies from other nations then circulated in Zimbabwe as currencies of exchange.

The first link and second link offer an expectation that the eventual dominant currency would become the US dollar, extending the financial domination of the US dollar over another part of the world. However, something went wrong with those expectations. Zimbabwe has just chosen the Chinese Yuan to be legal tender within the nation of Zimbabwe. China offered attractive inducements to the government of Zimbabwe via the forgiveness of debt to take the action of making the Chinese currency an official currency within Zimbabwe for financial transactions.

Zimbabwe is a very small part of the world’s economy, but this event has significance, I believe, far beyond the borders of Zimbabwe. It reveals that the Chinese Yuan is making significant inroads against the US dollar as a global reserve currency. I do not believe it is a coincidence that Zimbabwe took this action soon after the IMF made the Chinese Yuan an officially-recognized global reserve currency by adding it to the IMF’s select group of global currencies included in the IMF’s Special Drawing Rights. Now that the Chinese currency is an official global reserve currency, just like the US dollar, the Euro, the Japanese Yen, etc., it can be used by any nation as part of its monetary reserves with the assurance that all nations will recognize its official status.

This elevation of the Chinese currency comes at the expense of the US dollar and other currencies. This is a small action of itself, but I think it is indicative of a much larger and important global financial trend. This trend will see further elevation of the Chinese currency at the expense of the US Dollar and other global currencies. This is an example of a currency war that is occurring on a global scale. The US Dollar is a debt-denominated dollar while the Chinese Yuan is primarily an asset-backed currency. In any currency war, I think it is obvious which currency will ultimately win. Proverbs 22:7 states an immutable financial principal and law: That borrowers (debtors) are servants to lenders. The USA is the largest “borrower” of any nation on the planet. Indeed, it may be the most prolific borrower in the history of the planet. The USA is living, I believe, on the last vapors of the momentum of its past blessings and greatness. What happened in Zimbabwe will be little noticed in the world’s current events, but the trend of nations moving away from the US Dollar to the Chinese Yuan has now openly begun. One does wonder how many other nations are doing the same thing as Zimbabwe, but are just not openly proclaiming or talking about it.

Revelation 17-18 reveal where this trend will end. It will end when the current global financial system, dominated by the US Dollar, experiences a great fall and is replaced by a new global currency which will be issued or recognized by a new global governing system called the “beast” in biblical prophecy. This fall or collapse will not come as an accident. It will come as a result of the deliberate actions of “seven heads and ten horns,” whose identities are kept cryptic in the prophecy of Revelation 17-18. It could be nations or international entities who are the seven heads and ten horns. It could also identify (without naming them) seven super-powerful individuals acting through ten nations to accomplish this goal. We will have to wait and see how this prophecy unfolds, but it will come to pass. Isaiah 41:21-26 cites God’s guarantee that he will implement his prophecies and calls on mankind to acknowledge his invisible sovereignty when his prophecies do come to pass. The prophecy of Revelation 17-18 will be fulfilled in the “latter days” of our current age on earth. For many proofs that we are, indeed, living in the biblical “latter days,” I urge you to read my article, Are We Living in the Biblical Latter Days? The evidence is overwhelming that are now living in this prophesied time.

Zimbabwe is a small nation in global matters, but what happened there is indicative of a greater trend that we can expect to see accelerate as time progresses. Even small nations have so little regard for Obama that they feel emboldened to “diss” the USA as long as Obama is in the White House. A recent post noted that the tiny nation of Djibouti booted the USA from a US military base in its nation and gave it to China. The small nation of Zimbabwe has now elevated the Chinese currency at the expense of the US currency. The trend is obvious–to all who take the time to actually watch what is happening in the world. In the grand global game of geopolitics, China is playing financial “hardball.” The Obama administration is, unfortunately, just “playing.”