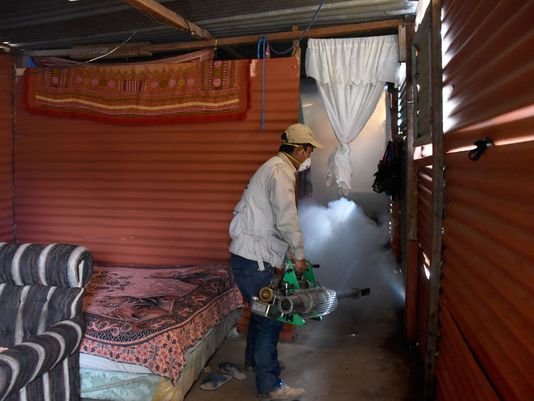 It is now confirmed that the Zika virus is spreading and that it can be spread in new ways. However, there is also a counter-narrative growing on the Internet about what has caused this virus to become virulent and how it became more virulent than in the past. This post will offer several updates and try to examine both the updates and the counter narrative in a dispassionate manner.

First let’s consider some known facts. It is now confirmed that the Zika virus is active in both saliva and urine (first link), raising the obvious fear that the virus can be transmitted via these body fluids as well as by mosquito bites and by sexual contact. In Brazil, the fear of transmitting the Zika virus by saliva is now so strong that health officials are advising people to avoid the indiscriminate kissing that occurs during the upcoming libertine Brazilian Carnival celebration. If someone with the Zika virus active in their saliva kisses others, everyone those other people kiss can also be infected. If the Zika virus can now be spread via mosquitoes, sexual contact, saliva, and urine, are we headed to a situation where the Zika virus can be spread via all body fluids? The Zika virus is showing up in more cases in the USA and in more nations. The Florida governor has declared emergencies in several counties due to the presence of the Zika virus in those counties (third link). If the Zika virus continues to spread and such warnings continue to spread, there will obviously be a detrimental economic impact on all the warm-weather tourist regions.

Yet, there is something odd about the Zika virus. The second link indicates that there are already an estimated 25,000 cases of the Zika virus in Colombia, but that microcephaly (the debilitating brain defect in newborns) has not yet been confirmed anywhere in Colombia, even though 3,100 pregnant mothers are known to have the Zika virus. In Colombia, it is the dreaded Guillain-Barre syndrome that is increasing and is “linked to the virus.” Colombia is projecting an eventual 600,000 infections in that nation.

Additionally, the first link reports that scientists are puzzled by the way this Zika virus is spreading and acting. The article reports that scientists were “particularly surprised that the virus is found in urine,” that “Each new discovery is a surprise for us,” and “This virus is clearly throwing one curve ball after the other.” if the scientists are baffled by how the Zika virus is spreading and where it is found, it raises the probability that the Zika virus is mutating from its less-threatening original nature when it was first noticed in Africa in the late 1940s. This then begs the question: Is it mutating naturally or have mankind’s actions caused such mutations? The fourth link reports that the scientific community is divided in its opinions about the virus and the degree of its threat to mankind. I’ve included the first and fourth links for readers to examine what the scientific community does and doesn’t know about this virus so you can decide for yourself what you think is the state of this crisis. Let’s hope and pray the virus is never found to be transmissible via an airborne vector. If that happens, a global panic is quite likely. For balance, we must remind ourselves that the vast majority of people who contract the Zika virus do not have any lasting damage from it and many have only minor symptoms. It is not at all like Ebola, which is life-threatening for all who contract it.

Given that the Zika virus has become something more widespread and threatening than it once was and that scientists are puzzled by its new manifestations, it does need to be considered that it may have mutated due to something mankind has done–a new counter narrative that has emerged on the Internet. The fifth link is included as it examines the possibility that the Zika virus has possibly been mutated by an effort to release genetically-modified mosquitoes “en masse” in Brazil to fight Dengue Fever and that the microcephaly outbreak in Brazil may be an unintended consequence caused by insecticide use or even a new vaccine which Brazil has mandated that expectant mothers must receive. The fact that babies born to expectant mothers in Brazil manifest the microcephaly defect but Zika-infected mothers in Colombia have so far not yet manifested that defect gives circumstantial support to the need to examine whether the vaccine given (apparently) just in Brazil is causing the microcephaly cases. It may also happen that microcephaly will manifest in other nations besides Brazil as the Zika virus spreads. We will have to wait and see.

I do not claim to be able to predict how bad or widespread this disease will become, but I will be watching its spread and effects very closely. From a biblical prophetic perspective, it does not matter whether the more malicious, current strain of the Zika virus mutated naturally or via man-made actions. It also does not matter whether the outbreaks of microcephaly and Guilllain-Barre Syndrome are caused by the Zika virus, a human genetic-manipulation experiment gone wrong or via vaccinations (or all of the above). A “pestilence” is a “pestilence” regardless of source or cause. The Ebola outbreak that killed thousands in several West African nations last year was also a severe “pestilence” that required extraordinary measures to quarantine the outbreak from spreading throughout the world. Matthew 24:7 prophesies that “famines, pestilence and earthquakes” will occur in diverse places around the world. Besides the Ebola and Zika pestilences that have stricken West Africa and the Americas, respectively, were you aware that a drought-caused famine is now affecting 14,000,000 people in Zimbabwe, South Africa, Botswana and Namibia (sixth link)? I think the world has scarcely noticed that mass famine yet, but it also acts to fulfill Matthew 24:7. The horrendous earthquake in Nepal received much media attention and it also acts to fulfill Matthew 24:7. Again, for balance, we must acknowledge that pestilences, famines and earthquakes have been present on earth throughout human history. I believe that Matthew 24:7 foretells that these afflictions and events will become more widespread and intense in the latter days. This view is also supported by Revelation 6:1-8. Since Daniel 12:4 predicts the “time of the end” will feature a knowledge explosion and the widespread availability of mass travel, it is apparent that the high-tech availability of global travel in our “latter days” period of time makes it uniquely easy for diseases and viruses to spread very quickly all over the world in a way that was impossible when travel occurred at the speed of donkeys, camels, ox-carts or sailing ships. Mankind’s modern technology has made it possible for Matthew 24:7’s prophecy about pestilences spreading to diverse parts of the earth to be fulfilled on a global scale.