“You Will Get Chipped” 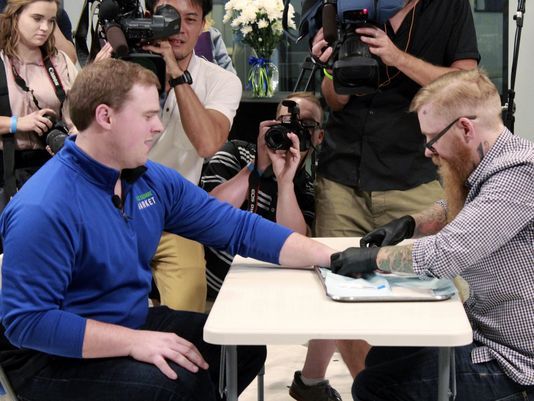 In late July, I wrote a post on the initial tests being conducted for “chipping” people in their right hands for identification and access control purposes. I was somewhat surprised to see that the mainstream media is doing more follow-up stories on this subject, and that they are sending us a more imperative message that we “will be chipped,” and the only question is how long it will take to get everyone chipped. When the mainstream media chooses to give a story “legs” with follow-up stories like this, they are sending us a message. The USA Today ran a follow-up story informing all of us that we will all be chipped, and that it is an inevitability (link below). As you read the article, you will notice that there are unspoken messages between the lines. One is that “being chipped is good for you,” and that it is the “religious activists (i.e. ‘Christians’)” who are the “bad people” holding back this wonderful technological development.

The article notes, accurately, that religious activists are “appalled” at the thought of being chipped with an electronic device in their right hands. Due to the “negative connotation” [in the Bible] of being chipped, the writer’s article states that the complete chipping of human beings may not be accomplished until 2067 in our grandchildren’s lives. I think that is a tacit and unspoken inference that the elites think it may take that long to eliminate Christian beliefs from the masses. It could also be a suggestion to get you to lower your guard by thinking “that’s a long way off, I don’t need to worry about this at all.”

We are assured that the current chip that can be placed in you is “not a GPS tracker” (such as the ones that can follow you everywhere as depicted in how The Capital could continuously track all the gladiatorial tributes via their tracker chips in the Hunger Games movies). That assurance may be true now as long as the biochips are merely in their preliminary test phase. However, Revelation 13:16-17 makes it clear that at a future time, the coming beast power will make some type of chipping technology mandatory and I’ll bet all those eventual chips will have GPS trackers, passport information, financial/banking and employment information, address and employment data, etc. all embedded in them. That prophecy does indicate that the beast power will allow for some flexibility how people receive their tracking devices. They do not all have to be embedded in the right hand. Future electronic devices could also be placed in the forehead and have the name or number of the beast embedded in them in an alternative method (such as an attractive-looking electronic tattoo on the forehead perhaps?).

The article cites one researcher stating (regarding the bio chipping of humans) that “the vast majority of people will not put up with this.” It adds that there are efforts in state legislatures to forbid governments to forcefully make people receive such a “mark” on their bodies. If the idea of being lined up and forcefully given an electronic tracker chip in or in your body dismays you, I suggest that you contact the legislators in your state and ask them that they introduce or support legislation in your state to forbid such a practice. If you live in nations outside the USA, I suggest you contact your elected representative (if you have them) to support similar measures.

The current primitive forms of biochips are apparently company-specific. In other words, they are designed to open doors and grant access to company employees who work within those companies’ facilities. These preliminary chips do not appear to be “portable.” This begs the question: If you go to work for a different company, will you have your current chip removed before you leave that company? As more companies adopt this invasive employee-monitoring technology, it will create a situation where more and more companies demand that Congress impose a national law that requires a “portable” chip with vastly increased data-storage capabilities. They will try to sell it, I would expect, as a cost-control and “convenience” measure. This kind of technology may also be imposed on a global basis by the eventual beast power (Revelation 13:16-17) after the global collapse of the current financial/monetary system called”Babylon the Great” in Revelation 17-18. At that point, it will likely not be voluntary.

I make no predictions how soon the above prophecies will be fulfilled, but what is clear is that the technologies prophesied in Revelation 13 to be imposed on people by the beast power are now already being developed and tested in human populations. The Bible’s prophecies are, once again, taking shape to be fulfilled literally in the years ahead of us. If readers are unfamiliar with the concept of the biblical “latter days,” I urge you to read my article, Are We Living in the Biblical Latter Days?, which examines this concept in much detail and confirms that we are, indeed, living in the latter days of our current age.