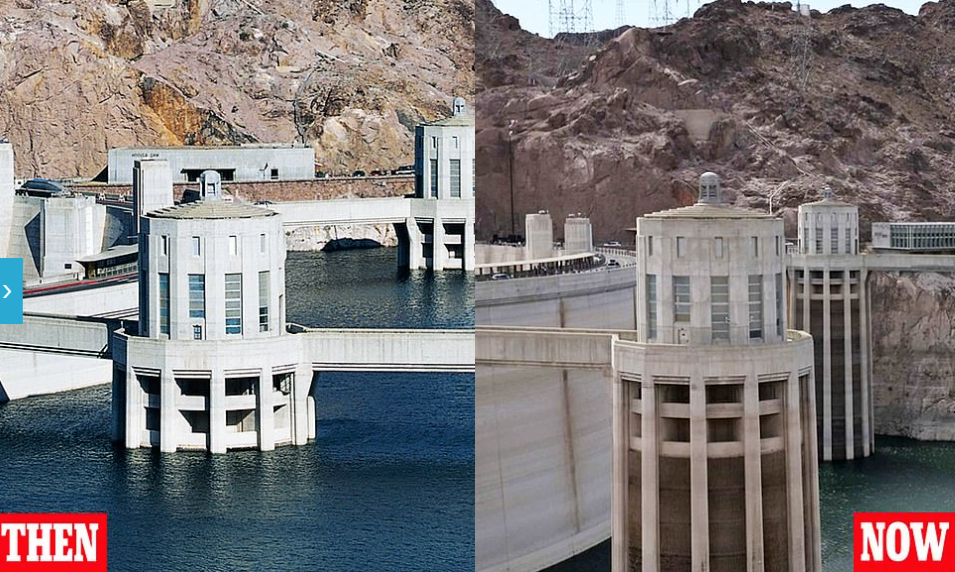 The great American drought is steadily getting worse. Indeed, we may run out of superlatives to describe it in the next few months and years. The first link reports that half the American West is under extreme or exceptional drought classifications. It also reports that Lake Mead, held back by the Hoover Dam, is at record low levels, and that a federal water emergency declaration may be imminent. It also introduces a ramification of this drought that will be discussed more later in this post: The Hoover Dam is steadily losing its ability to generate electricity for the West due to the dropping water levels in Lake Mead. Currently, the dam’s electricity-generating capacity is already down 25% and it is expected to drop more as the year progresses. The first link has remarkable visual images that need to be seen to be believed. As you view the images, keep in mind the lake’s level used to be at the old water-line which is the top of the area shaded whitish-gray. The official drought map is in the second link, but the actual drought situation is likely worse than depicted in the link. The drought map that I posted had not been updated since June 8th. Perhaps the map you see will have updated to a new depiction of the drought situation by the time you read this post.

The third link shows how low the Oroville Dam reservoir in California has dropped. It reports the reservoir has dropped to 42% of capacity, and it includes an extensive photo gallery confirming how severe the drought is. The fourth link reports the Oroville reservoir has dropped to 38% of its capacity, its lowest level in 40 years. The fourth link shows how rapidly the reservoir is sinking as many houseboats had to be removed from shallow bays that no longer offered their owners access to the main lake. It reports that this shrinking reservoir supplies drinking water to 27 million people and irrigation water to 4-5 million acres of farmland. The drought is also making vegetation ripe for burning, and California is at risk of a record wildfire season due to the unusually dry conditions. I’ve noticed in news reports in recent days that the American Southwest has had temperatures as high as 110-116 degrees in a large region including Las Vegas. Can you imagine how such torrid heat will accelerate the rate of evaporation from those already depleted reservoirs?

Speaking of farmland, a lot of it in California is being taken out of production due to the worsening drought. The fifth link details which crops are going to be in shorter supply because farmers are having to switch to crops which can survive with less water. As an example of how extreme the crisis is, some farmers received only 5% of their usual water ration this year. Obviously this means a lot less vegetables, fruits and nuts will be grown in California and surrounding states. The link offers special attention to one farmer who literally killed 600 acres (!) of almond trees because he knew he would not have enough water to produce any nut crop from them. How many other farmers are doing the same thing? When fruit and nut orchards are torn down in large quantities, it means the ability to produce a normal crop of those items will be gone for many years. No wonder there have been reports that food prices are climbing rapidly. The sixth link is one of my previous posts addressing the rise in food prices.

Some farmers who have access to their own irrigation water can still produce normal crops, but there is such a complex system of water rights and laws in the Western USA that many people who think they have access to irrigation water will find their claim on that water has evaporated due to governmental emergency restrictions and interventions. California and the western USA has been using up subsurface water for decades to produce lush crops, but there is an underappreciated danger of taking such huge amounts of water from underground reservoirs. As water is taken from underground reservoirs, the surface of the land starts to sink due to subsidence of the land slowly collapsing in on itself. Once it subsides to a certain level, the ground loses the ability to ever hold the same amount of ground water again as the surface levels sink and the underground reservoir spaces are filled up with subsiding soil. The seventh link is a post I wrote about six years ago detailing this danger and also looking at the long-term consequences of the great American drought in a biblical context. California has had a couple years of normal rains, but this year is so dry that the water crisis is at its worst level and is steadily worsening. What I wrote then is just as applicable today. As my commentary then noted, there could be major societal upheavals and hardships if this mega-drought continues.

My region of South Dakota is also in a severe drought. The Big Sioux River flows through Sioux Falls, and it is a terrific (and loud) sight when it has a huge flow over its waterfalls due to snow melts in the Spring after winters with heavy snowfalls. My state is in the Western USA, and we are experiencing the same drought as the rest of the western states. Our main crops are corn and soybeans instead of vegetables, fruit and nuts. However, we are also very short of rain and temperatures have been in the 90s (or even the 100s) for some time. I’ve seen even the mountain states of Wyoming and Montana have had days with temperatures over 100 degrees. Our Big Sioux River can scarcely be called a river at the present time. Kayaking is usually popular as a river sport in our summers, but this year the water depths are too shallow to allow kayaks to be used in most areas of the river. The minimum level of water flow to permit kayaking on our river is 250 cubic feet per second (CFS), but one river gauge has fallen to a mere 40 CFS. In other words, the river flow is about 1/6th of the minimum needed for safe kayaking. Water tubing is now recommended because one can do that on a mere 3 inches of water depth. That is how far our river has shrunk (eighth link).

Now to comment on the new crisis that is facing the Western states due to the drought–loss of electrical power. The first link touched on this, but the ninth link and tenth link focus on just how severe this threat could become. Many dams furnish hydroelectric power to western states, but as the reservoirs drop precipitously, the ability of the generators inside the dams to produce electricity drops as well. The Hoover Dam has already lost one-quarter of its electricity-generating capacity due to the shrinking reservoirs, and this will only get worse. Many states will soon face the risk of brown-outs or rationed electricity use due to dropping power generation all across the western states. This means the worsening western drought may cause not only food and water usages to be rationed, but electricity may have to be rationed as well.

It is not only the USA which is experiencing drought. Media reports I’ve read report Brazil, Russia, Mexico, Taiwan, etc. also have droughts. This means global food production is going to be down as a result of widespread droughts, and foodstuffs may be in ever-shorter supply as we progress into the future. At some point, we will reach the point prophesied in Revelation 6:5-6 which foretells that food will be rationed by price due to food shortages during the latter days of our current age. I have a lengthier discussion of biblical prophecies about drought in the sixth and seventh links so I will not repeat it in the commentary in this post. Those desiring a deeper look at biblical prophecies in this regard are referred to those links.

It seems to me that California is a state which has had uniquely bad public policy leaders for many years. The effects of this drought could have been greatly mitigated if California had had good leaders with some foresight in recent decades. They have a huge and worsening water shortage, but if they would just look westward they would see the Pacific Ocean with its endless supply of water. One would think that California leaders, knowing they are in an inherently dry region, would have taken appropriate action many years ago to ensure a greater water supply for California. If twenty years ago, California would have built a series of water desalinization plants all along its coast line, they could be producing many millions of gallons of fresh water per day now. This would greatly lessen the effects of the modern drought crisis. It also would have been easily affordable, as the demand for water is vast. The desalinization plants could have been built with revenue bonds as they could easily pay off such bonds with fees charged to people buying the water. Given the drought in many western states, California could be selling huge amounts of water to Arizona, Utah, Nevada, etc. by now. California, instead of being water-starved, could have become a water-exporter by now…if their leaders had had foresight. There is really no excuse for California’s dire water shortages. If Israel and Saudi Arabia can build efficient water desalinization plants, I’ll bet there are engineers who can build them on the West Coast of the USA as well. One word of advice to Governor Newsom and the other California leaders: If you do finally get around to building the needed water desalinization plants, be sure to do your research and don’t site them on top of any California earthquake fault lines.