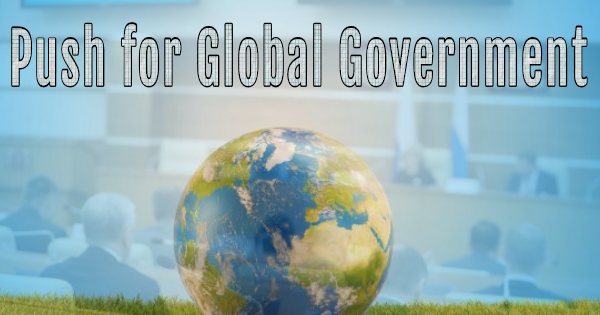 The UN leader was recently joined by a top religious leader in the chorus calling for a global government. Pope Francis not long ago called for a “new humanism” in a joint declaration with an Islamic leader. The second link looks at Pope Francis’ statement from a Jewish point of view, which asserts that Judaism and the state of Israel are “entirely incompatible with a New World Order.” I believe you will find this Jewish-based perspective on Pope Francis’ desire for a, NWO, to be very informative. The link warns that Pope Francis intends to “align the Catholic Church with Islam in a one-world religion.”

Here we have prominent world leaders calling for a “global government” and a “one-world religion.” This should cause all biblically-based readers to remember the warning in the book of Revelation that a political leader called “the beast” and a religious leader called the “false prophet” will eventually unite church and state in a global system which will deceive the masses and unite them against the real Jesus Christ, who will execute these top political and religious leaders when he returns (Revelation 13:1-8, 19:4-20:4). The language in Revelation 13:4 shows that the beast power will reveal previously unknown, advanced weaponry that will amaze the world, giving it the “teeth” to dominate the world. This sounds consistent with the call by UN leader Guterres that a global government has to have the “teeth” to enforce its dictates to the nations.

The first two links also show that the globalists want a global government that controls the world’s finances as well as its politics. As the world moves relentlessly toward all-digital financial transactions, it confirms the world is drawing closer to the fulfillment of Revelation 13:11-18 which foretold the end-time global governing system will be able to both monitor and control global financial transactions. The third link reports that Italy is moving toward the creation of an all-digital Euro currency, which would make Italy the first European nation to follow China into an all-digital financial environment. However, Italy is not the only major nation considering such a cashless society. The fourth link reports that Finland, Sweden, South Korea, the United Kingdom, and Australia are following in China’s footsteps toward all-digital transactions. This will not be a painless switch-over, however. The fifth link analyzes some of the advantages and disadvantages of a cashless society. The disadvantage that worries me the most is the danger of criminals hacking into digital accounts to steal money or personal information. For years, there have been reports of major breaches of supposedly secure financial/banking accounting systems in which millions of accounts have been hacked at once. Another huge disadvantage of all-digital currencies is its vulnerability to an electromagnetic pulse (EMP) weapon being used which would “fry” everyone’s data, bringing the global financial system to a halt. Even a major electromagnetic pulse emitted by the sun could “fry” an all-digital network. If the world ever moves to an all-digital system, you would be well-advised to regularly print out your financial account balances and activities on “hard copy” so you can prove what funds you had in your accounts in the event such a systemic digital failure occurs.

Clearly, the fulfillment of biblical prophecies continues in our modern world. When he had his vision known to us as the book of Revelation, the Prophet John had no idea of how to explain the technological sophistication of the latter-day society he witnessed. He had to use low-tech vocabulary to attempt to describe what he saw latter-day human society would become, and many have long thought he was merely writing metaphorically. Now that mankind’s technology is advancing so rapidly, we can see that he was writing about literal realities he witnessed in our latter-day society. He had to use low-tech language to describe modern tanks, attack helicopters and warplanes in Revelation 9, and only modern digital technologies could make Revelation 13:16-17 literally possible. John also saw that two mighty prophets will be sent by God who will wield Divinely-delegated power for 1260 days in a final warning from the Creator God to, a sinful and rebellious mankind (Revelation 11:1-13). John calls them the Two Witnesses, and they will be killed at the end of their ministry. Significantly, John could see that people all over the world (“people and kindreds and tongues and nations”) would be able to “see” their dead bodies lying unburied for three and one-half days before they are supernaturally resurrected while the world watches! This kind of simultaneous watching of events in a specific location by people all over the world could only be fulfilled in a time when there are live web-cams, live video links, etc. We live in that prophesied time seen by the Apostle John.

For much more in-depth examination of some of the above topics, please read my articles, Are We Living in the Biblical Latter Days?, The Two Witnesses, and Is Babylon the Great about to Fall…Ushering in a New Beast System? We are living at a time when momentous events prophesied millennia ago in the bible are soon to actually occur. You need to know what is about to happen to protect yourself, your family and your loved ones. Those who do not understand the biblical prophecies will be easily deceived by the epic and very deceitful events that will come to pass on the earth when these prophecies are fulfilled.